There have been increased incidents of military intimidation in the last couple of weeks in areas like Pilakudiyirippu (near Keppapulavu), Paravipaanchan in Kilinochchi, and Puthukkudiyiruppu – former military held lands which have been released to former residents after sustained protests, human rights activist Ruki Fernando said.

This culminated in the Sri Lankan Air Force (SLAF) questioning Fernando during a visit to Pilakudiyirippu on March 9, he added. 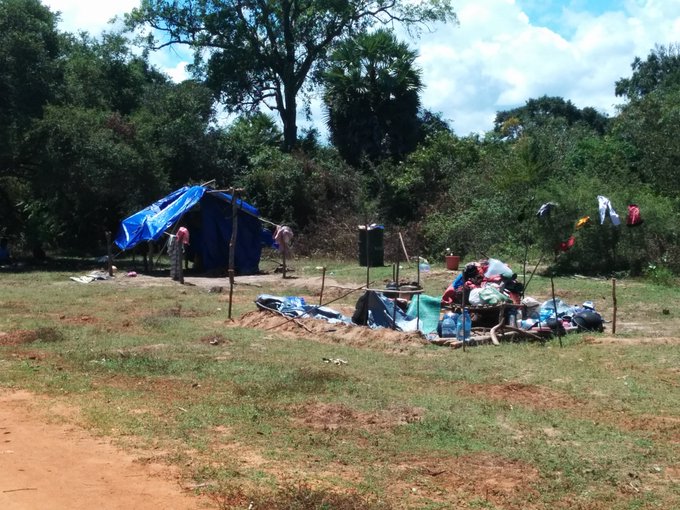 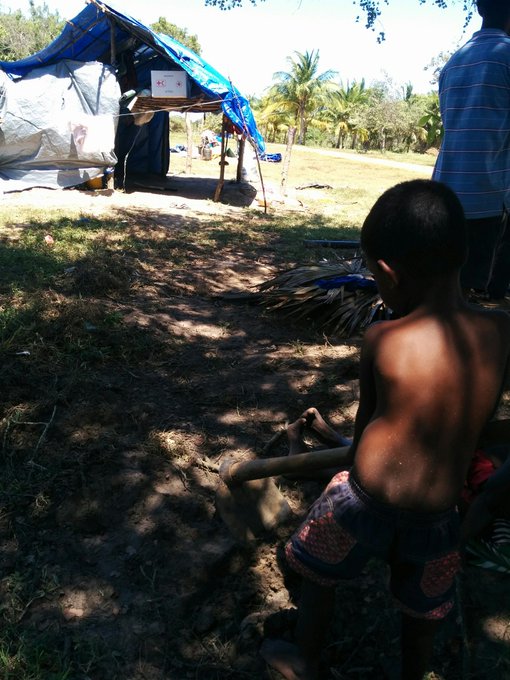 “I was talking to a few of the residents when two people in civilian clothing came up to me. They asked me who I was and why I had come. When I in turn asked them who they were, they informed me that they were from the air force camp next to the village,” Fernando said. He added that he had refused to answer the questions and had walked away, and the Air Force personnel had not attempted to harass him further.

The people of Pilakudiyirippu have been protesting from January 31 to March 1 this year demanding the return of their lands, held by the SLAF. Most of the land was released on March 1. However, the residents of Pilakudiyirippu are facing the challenging prospect of rebuilding their lives.

“They are living in tents or under trees. They need housing, water and electricity. Most of the residents are involved in casual work, and their children go to school, but there is no bus service,” Fernando said of the returning families plight.

He added that while the Red Cross in Mullaitivu had provided essentials such as pots, pans, mats, a bedsheet and a lamp to each family, there had been “absolutely no support” from the Government. “The government needs to step in and provide for these families. It’s not enough to just release the land,” Fernando said.

Apart from the questioning, there have been other incidents of intimidation, as the military react in anger to the release of lands due to pressure, Fernando said.

Keppapulavu was in the news when residents protested day and night for the return of their land, in the face of military intimidation. A leading figure in the struggle for both Keppapulavu and Pilakudiyirippu was Chandra Leela, whose house is still under army occupation. Recently, Chandra Leela was stopped from accessing her agricultural land, Fernando said. “The Air Force is now saying that the land she uses for agricultural purposes is the property of the Forest Department. But she has legal documentation,” Fernando said. “This is clearly retaliation due to the partial success of the protests.” The Government released 40 acres of land, in response to the protests – other families are still waiting for their land and have recommenced protests until it is returned.

“We are going home which my younger brother doesn’t know of; I too forgotten how its look like”children exited to see home in #Keppapulavu pic.twitter.com/825bTvUGBN 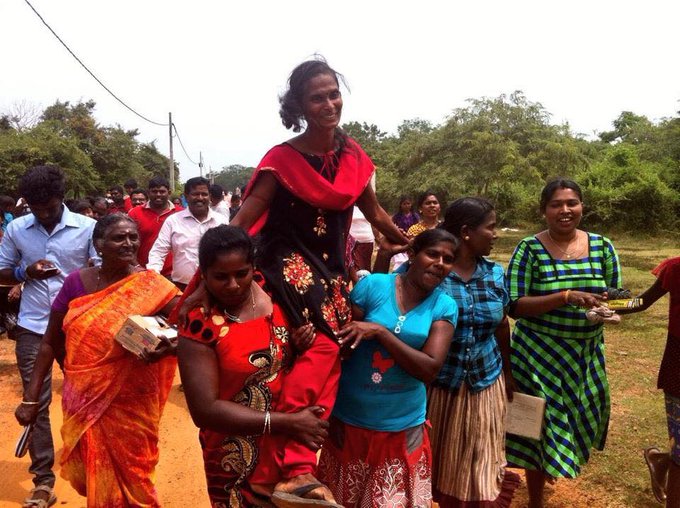 Courageous women of #Keppapulavu led the struggle for lands; Kowsalya-an outspoken lady was greeted by her fellow protesters/villagers today pic.twitter.com/DvvfvArW55

The military also regularly photograph any visitors. “As soon as we get down from a vehicle, we see people come from inside the camp and photographing us. The people who are still protesting noticed this too,” Fernando said. 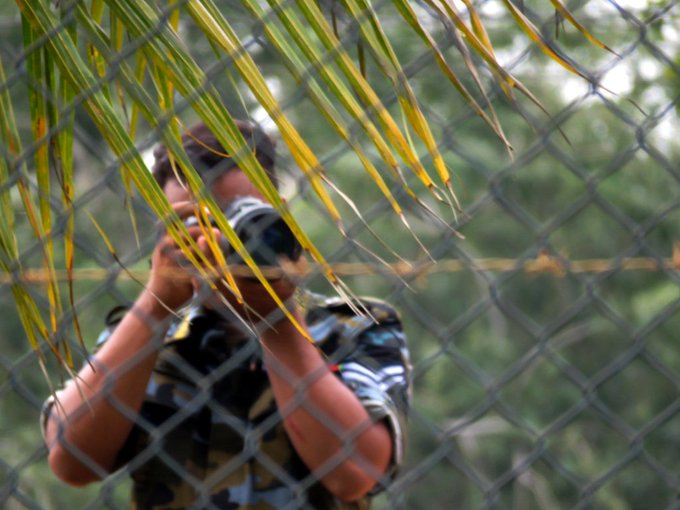 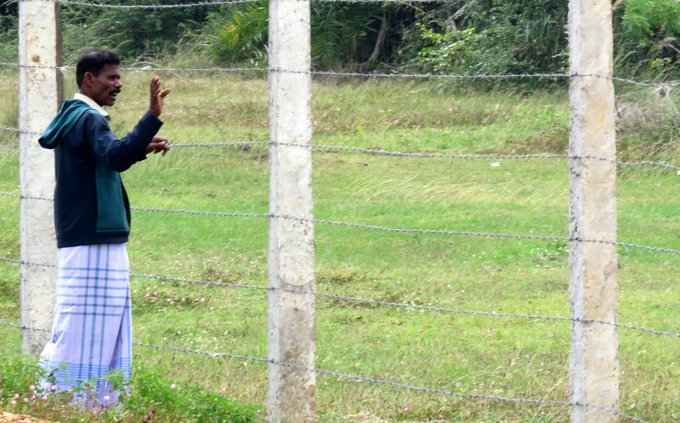 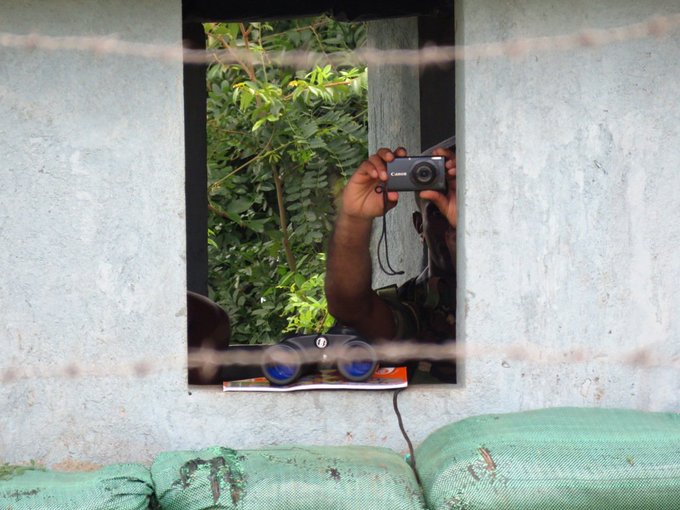 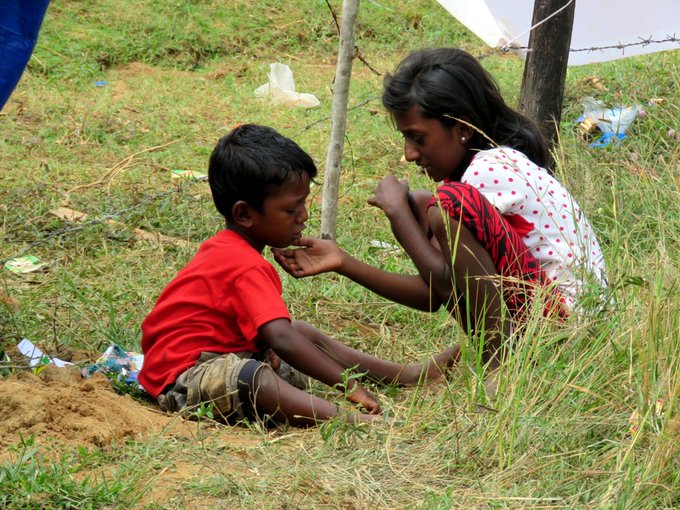 A solidarity protest in Jaffna demanding for the release of military occupied lands also saw military intimidating some of the participants. “I attended this protest, along with people from Trincomalee and Mannar, and many others. Some military personnel singled out one person and accused him of instigating the protest,” Fernando said.

In Puthukkudiyiruppu, families returning to their land after one month of protests, ending on March 3, found houses bulldozed, doors, windows and toilet and kitchen fittings removed, and beer and arrack bottles strewn around the area. A small shop had also been destroyed. “There was clearly anger from the side of the military that people were getting their land back. The release of military occupied land is part and parcel of reconciliation, and this is exactly the opposite of what should be happening,” Fernando said.

In Keppapulavu, a new signboard states the surrounding land is an ‘army cantonment area,’ he added. “There is a military blockade which had been there for around five or six years. But this signboard is new. I didn’t see it when I visited around two weeks before.”

Parallel to the protests on military occupied land, families affected by enforced disappearances in Vavuniya, Kilinochchi and most recently Mullaitivu have also begun sustained protests. “What is significant about the protests in Vavuniya and Kilinochchi is that they are actually trying to reach out for Sinhalese support. The protests have banners in Sinhalese and some Tamil groups have been sending out support letters in Sinhalese as well,” Fernando said. The protest in Mullaitivu is just two days old, and is much smaller. “However it is ongoing for 24 hours, with the families working in shifts. Some of the people have to work, others are leaving their children to come and protest. So they are trying to strike a balance between going to work but also sustaining their protests for 24 hours,” Fernando said. 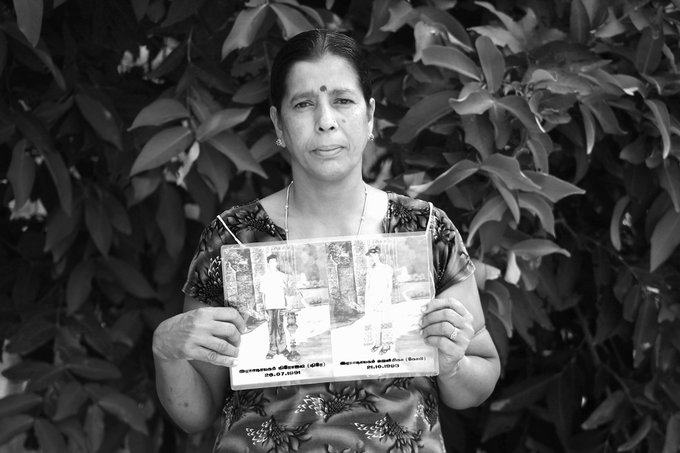 “Your son will return. We don’t know about your daughter: CID”
Courtesy sister publication Maatram 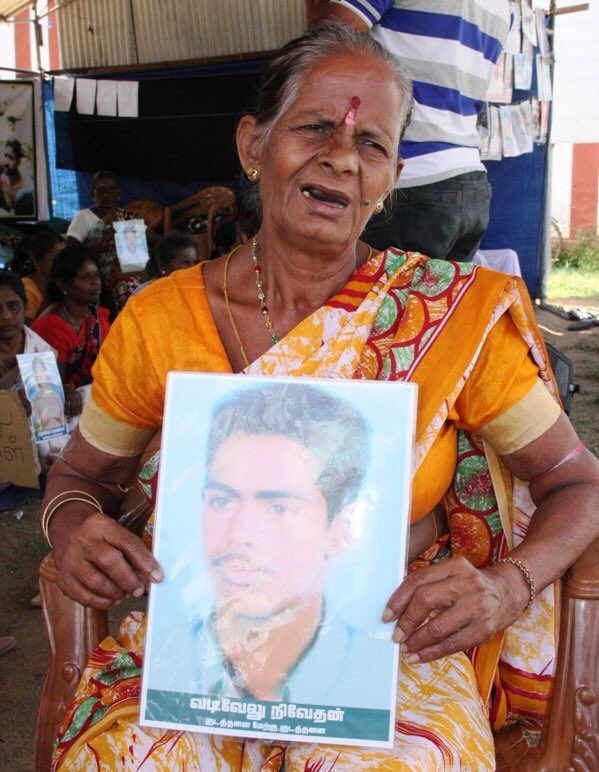 In the case of these families too, there has been limited progress, apart from in Vavuniya, when State Minister of Defence Ruwan Wijewardene promised to set up a meeting with the Minister of Law and Order, the Attorney General’s Department, the IGP and the Minister of Justice. The promise broke a four day hunger strike that the families had launched, demanding answers. “Following that meeting, the only thing that occurred was that certain members of the government accused the families of trying to prioritise their individual cases. The families said that in fact it was the government who had offered to expedite their cases, which they had rejected as they wanted truth and justice for all the families,” Fernando said.

The families of Vavuniya waited two weeks to see if anything would culminate from the meeting on February 9, and recently began protesting again due to lack of action.

In the backdrop of this, a Sri Lankan delegation to the United Nations asked for more time to implement UN resolution 30/1 of 2015, even as the United Nations High Commissioner for Human Rights, Zeid Ra’ad Al Hussein spoke of Sri Lanka’s ‘slow progress’ in areas such as accountability and reconciliation. The UN Human Rights Council also asked for the return of all military occupied land to civilians, as well as the end of military involvement in civilian and administrative activities.

However, as is clear on the ground, incidents of intimidation continue to occur, and returnee families such as those in Pilakudiyirippu have to rebuild their lives with no support from the State.