After the most thrilling and tumultuous election campaign of recent times, the French have defied populism and made history. Emmanuel Macron, the 39-year-old leader of the fledgling En Marche! (On the Move!) party, soundly defeated Ms Marine Le Pen by 66% to 34%. The defeat of Le Pen, the ‘unsinkable’ stalwart of the xenophobic right, undoubtedly offered great comfort to all those who have worried of the almost meteoric rise of the far right movements in the recent past in the West. There was a fear that the French would choose nationalism. It’s been a difficult moment – the country was so divided. The atmosphere of the election – while not exactly civil war – was of a deep clash of ideas. Ms Le Pen’s harsh and negative campaign based on opposition to the European Union, opposition to immigration and opposition to supposed elitism, while espousing aggressive nationalism, was emphatically rejected by the voters.

Throughout his campaign, Macron pitched himself as a direct alternative to Marine Le Pen’s anti-immigrant, nationalist rhetoric and whose National Front party is also tainted by a racist past. French woke up to the vision of Macron to confront xenophobia and racism and to challenge the fantasies of economic isolation and to lead the nation by representing the cultural values of its skilled and educated people, and the young, bringing to a close an “annus horribilis”( horrible year) marked by Brexit and the election of Donald Trump. The prospect of a nation with the stature of France passing into the hands of a party regarded by so many to be racist, indeed near-fascist, caused alarm internationally across the mainstream political board. Madani Cheurfa, a professor of politics at Paris’s Sciences Po. Said “The world is focused on France because France has managed to encapsulate — almost to the point of caricature — the debate underway across the world.”

The U.S. elections and Brexit last year were preceded by a divisive campaign, overshadowed by hate speech specifically Xenophobic and Islamophobic and anti-establishment sentiments . Surprising or not, all of this could also be said about Sunday’s French presidential election as well. Naturally therefore, the West’s political establishments turned their anxious attention to a series of potentially disruptive elections in Europe. However, Far-right movements suffered set-backs , making Macron’s win the third consecutive setback for European populist parties who preached a mix of Trump-style nationalism and protectionism to voters fed up with conventional politics. Ms Le Pen’s defeat thus was not the first setback for right-wing populism in Europe . A far-right candidate Norbert Hofer lost Austria’s presidential vote in December, and the Dutch re-elected mainstream parties in March rejecting far-right firebrand Geert Wilders and his anti-Islam Party for Freedom (PVV). 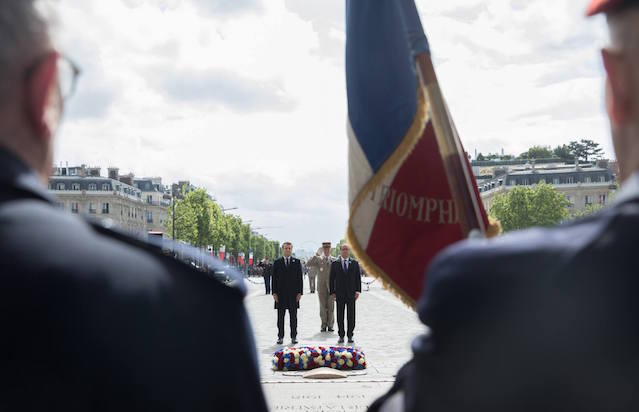 Debates around religion and identity are far more extreme in France. With regard to tackling the issue of home-grown radicalisation too, Macron certainly has a better idea of what that means as he promised to focus on preventative measures and coherent plans for integration although it will take a lot of work to make France match up with the inclusive, diverse image that he has painted around his campaign. Macron thus confronted racism, stigmatised it, and offered hope. As Josef Janning, head of the Berlin office of the European Council on Foreign Relations said, “This is what happens when the refugee crisis doesn’t dominate the headlines anymore and the right-wing populists are dismantling themselves. It isn’t that simple after all to break Europe apart with nationalism.”

However, all is still not well for Macron . One survey showed that 43 percent of those who voted for Macron on Sunday did so out of opposition to Le Pen’s National Front, with only a third doing so to renew French politics. The far-right took some comfort in its best electoral showing in French history. Further, although Le Pen fell well short of the presidency, her score was roughly double what her father, party founder Jean-Marie Le Pen, got in the second round in 2002. In the coming days, Mr Macron will therefore not only take in the full measure of what he has achieved, but also of the burden of the task ahead. He will appoint a provisional government but then needs to secure, or stitch together, a governing majority in parliament after two-round elections in June. Mr Macron’s ability to revive confidence and turn France around, matters for the whole of Europe. If he fails, it will be harder than ever next time to keep populism at bay, and the likes of Le Pen out of power. He rightly opined “As long as traditional parties brandish only fear or morality to fight the (Le Pen’s) FN, it won’t be efficient”.

As France’s biggest labour union, the CFDT said, “Now, all the anxieties expressed at the ballot by a part of the electorate must be heard,” it said in a statement. “The feeling of being disenfranchised, of injustice, and even abandonment is present among a large number of our citizens”. Macron also underlined this need during his victory speech. “I know the divisions of our country that have driven some to the extreme. I respect them. I know the anger, anxiety, and doubts that many have expressed”. He told The Economist last year, ‘Politicians needed to propose something positive, persuasive and engaging instead: an open, tolerant, pro-European society, based on encouraging private enterprise rather than crushing or over-protecting it, and creating paths out of poverty for globalisation’s victims.

As stated, the failure of the far-right to seize office comes in stark contrast to expectations in last November that Trump’s ascendancy in the United States would unleash a global wave of populist politicians. Trump’s anti-globalization and anti- Muslim rhetoric were more in line with Le Pen than Macron who adopted a more open and optimistic creed. The subsequent elections have shown a clear trend in Western Europe: Voters are sick of the mainstream and fed up with their leaders. But they are still not ready to hand power to the far-right. The chaotic first months of the Trump presidency may actually have hurt Europe’s populists rather than helping them. Even in Germany, the far-right Alternative for Germany has collapsed in opinion polls in recent months following post-Trump heights. Dr Maryse Helbert, a researcher in French national and international politics at the University of Melbourne, said Le Pen’s defeat signalled a rejection of populist sentiments. It shows that while yes, there was a wave of populism in the world, starting with Donald Trump and Brexit, it hasn’t translated in other European countries.”

As observers note, radical rightwing politics attempted to thrive by exploiting the popular rage that characterises the mood in France today (fuelled by joblessness and deep distrust of the elites). Despite that trend, a clear-sighted, energetic Macron came out on top. He calls himself “progressive”, and stands for social liberalism, or pro-market social democracy. As observers call him, he is the anti-radical who advocates step-by-step, moderate reform to heal the many fractures of an extremely tense and anxious country. He doesn’t want to pitch social classes or ethnic groups against one another. His is a slow-motion revolution, and that’s something utterly new by French standards. It’s an approach that could strike a chord not just across its’ continent that sees nationalism reawakened, but beyond too. The best antidote seems to be a confident centre, one built on pragmatic, moral, optimistic beliefs as experts point out.

What lessons can Sri Lanka draw from Macron victory?