The International Truth and Justice Project calls upon the Sri Lankan Government to ensure that their police immediately desist from threatening and intimidating Tamil activists and their families, after banning them from commemorating those who died in the civil war by carving their names on stones in Mullivaikkal. On Wednesday, the Mullaitivu court issued an order banning any prayers around the stones for a fortnight on the grounds that such an event might jeopardise national security, peace and integrity. On appeal, the court is reported to have raised concerns that there might be former LTTE cadres among the names carved on the stones. 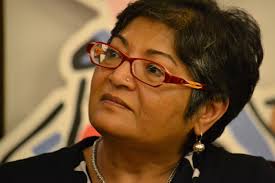 “The right to mourn is universal; you cannot prevent mothers and fathers from mourning their children even if they are LTTE cadres which we don’t know in this case,” said the International Truth and Justice Project’s executive director, Yasmin Sooka. “This is criminalising Tamils even beyond death; it’s utterly absurd and more so in a country that talks all the time about reconciliation.”

Today a Jesuit priest, Father Elil Rajendram, was summonsed and interrogated for the second time this week over the memorialisation stones. The priest, who does not speak Sinhala, was required to sign a statement in that language after being questioned in Vavuniya police station on the orders of the Inspector General of Police. Officers tried to intimidate and interogate Father Elil’s parents in Jaffna over his activities. Father Elil has been repeatedly asked to hand over a list of the names of the dead and questioned about whether he supports terrorism.

“This is clearly not about conducting an impartial investigation but about frightening the complainants,” said Yasmin Sooka. “It is unconscionable that the police have gone so far as to question Father Elil’s parents,” she added, “it’s clear that this reprisal is intended to frighten his family and send ripples of fear among all Tamil activists. Moreover it’s sanctioned by the IGP of police. We call upon the Human Rights Commission of Sri Lanka and the Office of the High Commissioner for Human Rights to intervene in this matter and stop the intimidation and reprisals. After all to mourn the dead is to be human”.