The European Union’s decision last week to restore the GSP plus concession allows Sri Lankan exports tariff free entry to its 28 countries. This could be a turning point in the country’s trade as the EU is a foremost market for the country’s exports. This opportunity must be seized to increase exports to the EU by adopting economic policies that would increase production of tradable goods.

Background
Sri Lanka became a beneficiary of GSP Plus in 2005. It lost this concession in December 2009, as the country could not meet the conditions of UN Conventions on civil and political rights, on torture and rights of children. The withdrawal of GSP plus was a serious setback to our exports.

GSP removal
When the GSP plus concession was removed in 2010, it took some time for the government to realise that the removal of the GSP plus status was a blow to the country’s exports. The government displayed arrogance, overconfidence and complacency claiming that it did not matter. In fact it did matter.

Blow to exports
The removal of GSP plus was a blow to exports. The country’s exports to the EU that accounted for nearly 40 percent fell to about a third. This had adverse backward linkages with the reduced production of several manufactured exports, most notably, garments, ceramics and rubber goods. For instance 25 garment factories were shut down and about 25,000 workers lost their employment. 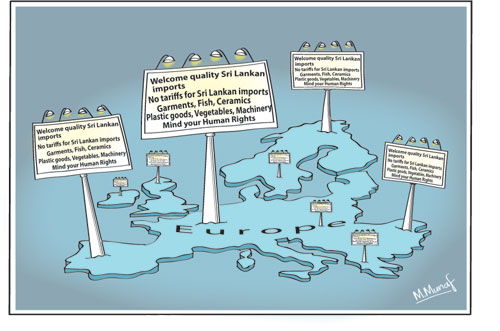 The GSP plus concession had the greatest impact on apparel exports. The EU became the largest market for Sri Lanka’s apparel exports mainly due to the GSP plus. Garment exports accounts for approximately 60 percent of our exports to EU markets.

Importance of EU
The European Union (EU), together with the United States of America, account for around two thirds of Sri Lanka’s exports. Even without the GSP plus concession, exports to the EU amounted to about 30 percent of our exports in recent years. The tariff free entry to this market once again provides an opportunity to expand exports significantly in due course.

Benefit
Exports will not expand immediately. Manufacturers would have to enhance their production capacity. This may take some time in some industries. Others like garments may be able to respond faster to the new opportunity, if they have underutilised capacity. It is the medium term opportunities that manufacturers must gear them to. The EU has estimated that our export earnings this year would increase by about 300 million Euros.

Opportune
GSP plus is especially opportune as the country’s exports have been sliding in recent years. This advantage comes at a time when the country’s trade performance has been woefully unsatisfactory. In 2015 the country’s export earnings fell by 5.6 percent to US$10.5 billion, followed by a further 2.2 percent decline in export earnings in 2016 to US $ 10.3 billion. Consequently, Sri Lanka’s trade deficit reached US$8.4 billion in 2015, and increased to a massive US$9.1 in 2016.

Policy imperatives
Policies that enable an expansion of exportable goods are imperative to take advantage of this renewed concession. The extent of the benefit derived from the GSP plus concession depends on whether the country could expand production of exportable goods at competitive prices to this important market. In order to gain significantly, the government must ensure that the real effective exchange rate is flexible, that inflation is minimal and that the costs of production remain fairly stable. Unless macro economic policies ensure these conditions the gains from the tariff concession could be wiped away.

It is also crucial that economic policies attract foreign investment for export manufacture. The market access to the EU should be complemented with macroeconomic policies conducive to attract especially hi-tech manufacturers. Without these developments the gains from the tariff concession would be of minimal benefit.

Concluding reflections
The granting of the GSP plus concession by the EU is an opportunity to increase the country’s failing exports. The extent to which this concession would benefit exports would depend on the capacity of the country to expand the supply of goods that are in demand in the EU. This in turn requires macroeconomic policies that would enable production of goods at competitive prices. The flexibility of the exchange rate, low inflation and costs of production are important factors to ensure this.
Policies must encourage foreign investors to establish export manufactures especially of a hi-tech nature. There is a need to diversify our exports. The lack of diversification into new export products has been a serious deficiency in our export product profile. The Central Bank has pointed out that the country has failed to diversify exports in the last ten years.

EU Ambassador Tung-Lai Margue made an interesting suggestion that Sri Lanka should also explore new countries in the EU to export products.  This implies that there is a market concentration of our exports within the EU. Both diversification of the export basket and diversifying markets within the EU are areas for profitable exploration.