[TamilNet, Saturday, 20 May 2017, 22:09 GMT]
The deployment of Sinhala military belonging to 232 Brigade Headquarters of the occupying Sinhala military at Kudumpi-malai (which is also known as Thoppik-kal and Baron’s Cap) in the interior of the northwestern hinterland of Batticaloa is not only a demographic and structural threat, but also a cultural threat, complain Tamil villagers. More than 500 Eezham Tamil families were living there during the times of the LTTE. Only 120 families have managed to resettle there amidst the deprived infrastructure and basic facilities to them. Their temples are still under SL military occupation. Tamil Heroes Cemetery, which was the largest one in the district, has been fully bulldozed and a Sinhala military base is built there. Monuments of SL military’s genocidal victory are showcased to the Sinhala visitors, who are promoted to tour the area as visitors to ‘Thoppigala Heritage Park’.

Also this year, Tamil villagers had to struggle to observe their annual temple feast amidst military harassment. The temple feast is observed on the first Monday of Tamil month of Vaikaasi. While Sinhala tourists visiting Kudumpimalai are taken to the top of the hillock without any restrictions by the occupying Sinhala military, the native villagers are only allowed entry to their Murukan temple on specified dates.

The Kudumpi-malai hillock is locally believed as an abode of God Murukan and the Murukan temple has a long history.

The term Kudumpi is Eezham Tamil form of the Tamil word Kudumi of Dravidian etymology, which commonly means the traditional hairdo of men in the form of a coiled knot either on top of the head or on the sides.

Colombo’s military seized Kudumpimalai from the control of the Tamil Tigers in 2007 and placed a small Buddhist construction besides the Murukan temple.

The SL military has a military post on the top of the hill and uses Murukan temple to store military hardware.

The local people are also prevented from visiting the Ka’n’naki temple situated near the hillock in the jungle area, where they traditionally perform annual rituals like Madai and Ku’lirththi. 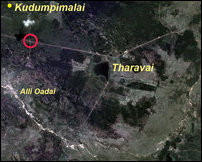 The military, which has built a ‘victory monument’ has been promoting so-called heritage tour promoting a nearby site as “Thoppigala Heritage Park” in collaboration with various SL ministries in Colombo.

The Sinhala military is operating a modern cafeteria, hosts ‘leadership training’ and operates ‘adventure games’ for the Sinhala ‘heritage’ tourists. The ‘park’ is maintained by the SL military.

SL Army’s 232 Brigade is stationed a few hundred meters away at Tharavai, where the largest Tamil Eelam Heroes Cemetery in the Batticaloa district was located. More than 675 fallen Tamil fighters lay buried at Tharavai Heroes Cemetery, which has been razed to the ground by genocidal Sinhala military.

The SL State has been scheming intense demographic changes to the division with an aim to annex some of the villages with the neighbouring Polonnaruwa district, similar to grabbing parts of the Mullaiththeevu district in the north to annex with Anuradhapura district.

Cutting the contiguity of Trincomalee and Batticaloa districts in the East is the agenda. 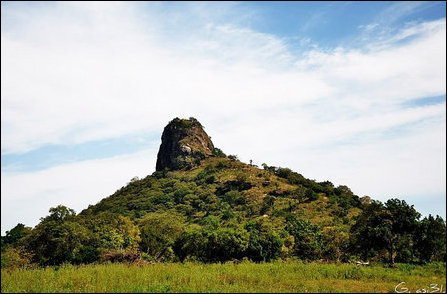