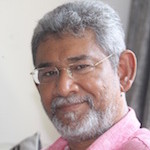 As confirmed by Dr. Jehan Perera’s latest column, the PM disclosed in Mannar that Indian Prime Minister Modi had urged him, President Sirisena and ex-Presidents Kumaratunga and Rajapaksa to solve the ethnic problem by bringing in a new Constitution without delay. The PM said that this will indeed be undertaken, and a draft document presented in a week or two, with a draft Constitution ready for adoption in two or three months.

Lenin said that “politics cannot but be the concentrated expression of economics”. The new Constitution is but the superstructure, the edifice of the new political economy for Sri Lanka that Prime Minister Wickremesinghe has outlined, most specifically in the “mega MoU” or “umbrella MoU” (as the Delhi media called it) with India, and Prime Minister Modi has placed in macro-perspective in his Vesak speech to this country’s power elite, both Government and Opposition.

“We believe that free flow of trade, investments, technology, and ideas across our borders will be to our mutual benefit…In infrastructure and connectivity, transport and energy, we are poised to scale up our cooperation…Our development partnership stretches across nearly every sector of human activity such as agriculture, education, health, resettlement, transport, power, culture, water, shelter, sports, and human resources…The economic and social wellbeing of the people of Sri Lanka is linked with that of 1.25 billion Indians.”

The quality Delhi press has spelled out the important implications of the proposed ETCA:

“Geethanjali Natraj, professor at the Indian Institute of Public Administration, points out that …the Economic and Technological Cooperation Agreement (ETCA), which is expected to be signed by the end of 2017, will enhance trade in services, investments, and technology cooperation with India’s five fastest-growing southern states — Karnataka, Tamil Nadu, Kerala, Andhra Pradesh, and Telangana. “Given these states’ proximity to Sri Lanka, the ETCA would leverage Sri Lanka’s unique geo-strategic location, which is at the crossroads of major shipping routes…” (Aditi Phadnis, Business Standard, 16 May 2017, emphasis mine-DJ)

With the free flow of capital, goods, services and labour through ETCA from the powerful economies of the Southern Indian states, national capitalism and the national capitalist class built up from the days of DS Senanayaka will be overrun.

The new Constitution will dismantle the biggest impediment to the implementation of the Modi vision, which is the existing Sri Lankan state with its strong center. It will (a) decentralize power to the provinces thereby weakening the center, thus (b) providing unfettered access to foreign capital, goods and manpower, and (d) facilitating the divestiture to foreign powers of the strategic national assets and resources of the country, while it will (e) centralize political power in the hands of the Prime Minister and his allies, the Chief Ministers of the North and East.

Mr. Modi’s dramatic declaration that “Whether it is on land or in the waters of the Indian Ocean, the security of our societies is indivisible” adds to the economic, a strategic dimension. What the new Constitution does is to enable India, or more correctly the India-US-Japan triad to guarantee its foothold in strategic Trincomalee as per the MoU, by securing its immediate environment, the Northern and Eastern provinces, through autonomizing (i.e. loosening) them from the Sri Lankan state’s center by granting quasi-federal powers.

With India’s implantation in the North and East, the new Constitution will turn Sri Lanka into a de-facto confederation within a federation i.e. a confederation of two ethnic zones, the Northeast and South on the island, while the island itself becomes a de facto federal state unit of India.

Looking back at age 60, I have never been prouder to have supported and worked with President Premadasa who had the guts and principles to openly demand that 70,000 Indian troops leave our soil (following it up in a written polemic with the Indian leader).

Let me go beyond Premadasa to invoke the words of the finest, most courageous, exemplary and successful leader a small island on the doorstep of a predatory giant ever had:

“…this little island will always be a revolutionary wall of granite and against it all conspiracies, all intrigues, all aggressions will be smashed to splinters. And high upon this revolutionary wall there will fly forever a banner with the legend: Patria o Muerte! Venceremos! (Fatherland or Death! We Shall Triumph!)” –Fidel Castro, Closing speech to the OLAS, 1967.

Our own little island home can be saved from the dreadful fate of disappearing from future History as an independent entity only if we, the people, the citizens, eviscerate the monster of the new Constitution at a Referendum this year or next.