British ministers including Theresa May and Philip Hammond have made hair-raising claims about the dangers of migrants entering the country. But do the facts bear them out?

When you’re facing the world’s biggest refugee crisis since the second world war, it helps to have a sober debate about how to respond. But to do that, you need facts and data – two things that the British migration debate has lacked this summer. Theresa May got the ball rolling in May, when she claimed on Radio 4 that the vast majority of migrants to Europe are Africans travelling for economic reasons. The media has followed suit, one example being the Daily Mail’s unsubstantiated recent assertion that seven in 10 migrants at Calais will reach the UK.

Foreign secretary Philip Hammond this week not only repeated May’s claimsabout African economic migrants, but portrayed them as marauders who would soon hasten the collapse of European civilisation. Hammond, like many people, could do with some actual statistics about the migration crisis. Here are 10 of the key ones:

Far from being propelled by economic migrants, this crisis is mostly about refugees. The assumption by the likes of Hammond, May and others is that the majority of those trying to reach Europe are fleeing poverty, which is not considered by the international community as a good enough reason to move to another country. Whereas in fact, by the end of July, 62% of those who had reached Europe by boat this year were from Syria, Eritrea and Afghanistan, according to figures compiled by the UN. These are countries torn apart by war, dictatorial oppression, and religious extremism – and, in Syria’s case, all three. Their citizens almost always have the legal right to refuge in Europe. And if you add to the mix those coming from Darfur, Iraq, Somalia, and some parts of Nigeria – then the total proportion of migrants likely to qualify for asylum rises to well over 70%.

Sign up to the Media Briefing: news for the news-makers

If you read the British press, you’d think that Calais was the major battleground of the European migrant crisis, and that Britain was the holy grail of its protagonists. In reality, the migrants at Calais account for as little as 1% of those who have arrived in Europe so far this year. Estimates suggest that between 2,000-5,000 migrants have reached Calais, which is between 1% and 2.5% of the more than 200,000 who have landed in Italy and Greece. Just as importantly, there is no evidence to suggest that as many as seven in 10 have reached Britain after arriving in Calais. The Daily Mail admitted this several paragraphs into its article.

Hammond said that the migrants would speed the collapse of the European social order. In reality, the number of migrants to have arrived so far this year (200,000) is so minuscule that it constitutes just 0.027% of Europe’s total population of 740 million. The world’s wealthiest continent can easily handle such a comparatively small influx.

There are countries with social infrastructure at breaking point because of the refugee crisis – but they aren’t in Europe. The most obvious example is Lebanon, which houses 1.2 million Syrian refugees within a total population of roughly 4.5 million. To put that in context, a country that is more than 100 times smaller than the EU has already taken in more than 50 times as many refugees as the EU will even consider resettling in the future. Lebanon has a refugee crisis. Europe – and, in particular, Britain – does not. 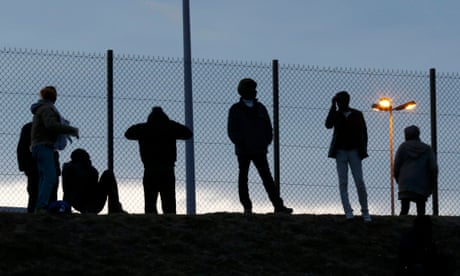 Migration crisis quiz: can you separate fact from fiction?

Many claim that Britain is a coveted destination for migrants because of its generous benefits system. Aside from the reality that most migrants have little prior knowledge of the exact nature of each European country’s asylum system, it is not true that the UK is particularly beneficent. Each asylum seeker in Britain gets a meagre £36.95 to live on (and they are not usually allowed to work to supplement this sum). In France, whose policies are supposedly driving up the numbers at Calais, migrants actually receive substantially more. According to the Asylum Information Database, asylum seekers in France receive up to £56.62 a week. Germany and Sweden – the two most popular migrant destinations – pay out £35.21 and £36.84 a week respectively, only fractionally less than Britain.

In the dog-whistle rhetoric of Hammond and Theresa May, the archetypal contemporary migrant in Europe is from Africa. But again, that’s not true. This year, according to UN figures, 50% alone are from two non-African countries: Syria (38%) and Afghanistan (12%). When migrants from Pakistan, Iraq and Iran are added into the equation, it becomes clear that the number of African migrants is significantly less than half. Even so, as discussed above, many of them – especially those from Eritrea, Darfur, and Somalia – have legitimate claims to refugee status.

Last autumn, the EU opted to suspend full-scale maritime rescue operations in the Mediterranean in the belief that their presence was encouraging more migrants to risk the sea journey from Libya to Europe. In reality, people kept on coming. In fact, there was a 4% year-on-year increase during the months that the rescue missions were on hiatus. Over 27,800 tried the journey in 2015, or died in the attempt, until operations were reinstated in May, according to figures from the International Organisation for Migration. Only 26,740 tried it in 2014. The disparity suggests that migrants were either unaware of the rescue operations in the first place, or simply unbothered by their suspension – a thesis borne out by my own interviews. “I don’t think that even if they decided to bomb migrant boats it would change peoples’ decision to go,” said Abu Jana, a Syrian I met as he was planning to make the sea voyage earlier this year.

Swarms, floods and marauders: the toxic metaphors of the migration debate

Contrary to the perception of the UK as the high altar of immigration, it is not a particularly major magnet for refugees. In 2014, just 25,870 people sought asylum in the UK, and only 10,050 were accepted. Germany (97275), France (68500), Sweden (39,905) and Italy (35,180) were all far more affected. When the ratings are calculated as a proportion to population size, the UK slips even further down the table – behind Belgium, Holland and Austria. If the ratings were calculated on 2015 rates, then even impoverished Greece would rise above the UK in the table. Just as tellingly, the UK has welcomed just 187 Syrians through legal mechanisms at the last count. Turkey has around 1.6 million.

Hammond and David Cameron argue that the solution to migration is to increase deportations. They believe this will save Britain money, as less cash will be spent on paying each asylum seeker £36.95 per week. However, this strategy ignores the cost of deportations – whose alleged financial cost could rival that of the asylum seekers’ benefits bill. According to a series of investigations by the website The Migrant Files, as many as €11bn have been spent on repatriating migrants to their countries of origin since 2000. A further billion has been blown on Europe-wide coordination efforts to secure European borders – money that could have been spent on integrating migrants into European society.

If everyone who reads our reporting, who likes it, helps to support it, our future would be much more secure.

Become a supporter
Make a contribution