As the Tamil National Alliance, the TNA, struggles against fissiparous tendencies threatening the seams that hold the TNA together, R. Sampanthan, the TNA leader, has written to Chief Minister C.V. Wigneswaran of the Northern Province. The letter explains what Sampanthan seeks: 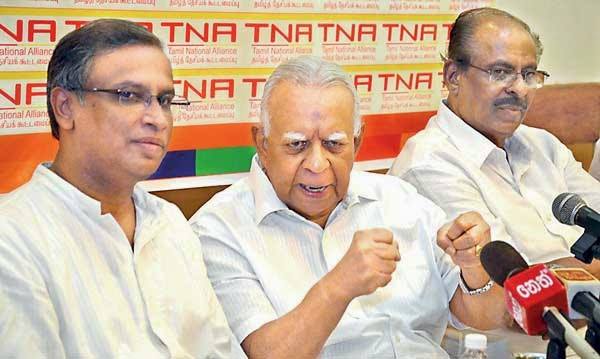 I wish to state the following. The board of inquiry appointed by you conducted investigations in respect of four ministers. The inquiry had been concluded and their report submitted to you. Two have been found guilty and two others have not been found guilty.

You stated in the Provincial Council that you would act on the basis of the report of the board of inquiry.

You have called for the resignations of the two ministers found guilty. No one has complained about that decision.

The complaint is about the action taken by you against the other two ministers in regard to whom there is no finding of guilt by the board of inquiry. This action is being seen as a violation of the principles of natural justice and unwarranted.

I called you on Tuesday the 13th to convey to you that such action could be resisted by the two ministers not found guilty and the members of the provincial council and suggested caution.

I also expressed concern that while you had been in touch with the other leaders of constituent parties in the Tamil National Alliance you had not discussed this matter with Hon. Mavai Senathirajah Member of Parliament and Leader of the Ilankai Tamil Arasu Katchi (ITAK).  You have called him later in the day and he had conveyed to you that action should not be taken against Ministers not found guilty.

On Wednesday the 14th you announced punitive action even against the two ministers who had not been found guilty.  Whatever that happened thereafter was as a result of your aforesaid action.

It is my view that to bring things to an end it is necessary to first take remedial action pertaining to the two ministers who have not been found guilty.

Unwarranted action should not be the cause for promoting disunity and disturbing the functioning of the Northern Provincial Council.

I would urge you to take early remedial action in regard to the two ministers not found guilty by your board of inquiry. This would not deter you from holding any further inquiry.

Leader of the Tamil National Alliance

Colombo Telegraph learns that Sampanthan will arrive in Jaffna for urgent talks tomorrow, Sunday, with the Chief Minister.

A near life-time member of the Federal Party was visibly upset. He said, “When Wigneswaran was brought into the FP, no one wanted him. Sampanthan Aiyah insisted and had his way. However, this motion of no confidence in the Chief Minister by our own members was not thought through. Party Seniors were never consulted. If it is tabled, it will pass. Out of the 38 members of the Provincial Assembly, 30 are of the TNA and 15 of the Federal Party. Even the non-FP members of the TNA will fall in line if they want our nomination next time. The Muslims will vote with us. We need merely 20 for passage. Once passed, the Chief Minister will not be able to even get a budget through and will have to step down.

“Did those who initiated this foolish motion consider what it will mean to the TNA? Having brought Wigneswaran in as a member of the FP, however foolishly, we now have to work with him.”

Sampanthan’s rush to Jaffna is to avoid a permanent and disastrous split. Continued the official,

“All those TNA chaps supporting the Chief Minister are pokkiris (போக்கிரி means scoundrel). These pokkiris never had a policy other than to break the TNA. Breaking the TNA is to break Tamil unity. That will break the FP. I am telling you, if you break the FP, that will be the end of the Tamil people.”

However, Colombo Telegraph learns that many are pushing for C.V.K. Sivagnanam of the FP, the Leader of the House, to be the new Chief Minister.