The new nominees by Chief Minister C.V. Wigneswaran (CVW) to replace the sacked Ministers T. Gurukularajah (Education) and Ponnuthurai Ainkaranesan were sworn in before Governor Reginald Cooray. The new nominees are Ananthi Sasitharan and K. Sarveswaran.

Ananthi was involved in making many of the complaints against the four Ministers, while Sarvesvaran’s brother Suresh Premachnadran led the street protests against the ministers in support of CVW. 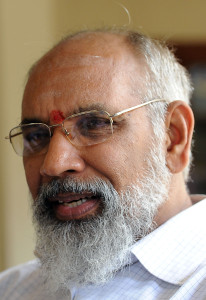 The hurt over CVW’s conduct in was not merely political. There was a lot of pain in the Protestant Community over Gurukularajah’s sacking as if he is a crook.  Gurukularajah was the son of the late Rev. Thambyrajah who founded and lived with his children in Navajeevanam, a home for orphans in the then undeveloped lands of Paranthan which he transformed into luscious paddy fields. A brother of Gurukularajah’s joined the clergy. Another ran Navajeevanam during the war years. Gurukularajah himself served ably as Director of Education in Kilinochchi. He was, importantly, found guilty only of administrative lapses, yet his sacking was lumped with that of Ainkaranesan who was found guilty of corruption.

In an effort to put on a face of being at peace with the Federal Party (ITAK or FP), Chief Minister CVW paid a visit to the office at Martyn Road Jaffna, of his nominal party, the FP, on the 26th.  Welcoming him, and as a pointed reminder of his neglected loyalties, party General Secretary Mavai Senathirajah told him, “It is my pleasure to welcome you to these premises on your first visit.” CVW insisted that he had been there before and the conversation trailed off with Senathirajah asking when and receiving no firm answer.

At that meeting, CVW told Senathirajah of his intention to offer Ananthi the portfolio on women’s affairs. It is noted that Ananthi, widow of disappeared LTTE-er Sasitharan (a.k.a. Elilan), contested for her seat at the NPC on the FP’s nomination but was suspended from the FP after she burnt the effigy of M.A. Sumanthiran, MP. It is said that at the next election, she will contest under the Tamil Congress’s Bicycle symbol as she is sure not to be given the FP’s nomination.

Senathirajah told CVW that he has to follow party discipline and not boost a suspended member. CVW is on record as saying elsewhere that he was nominated by all constituents of the TNA and not just the FP, and that his use of the FP’s House symbol is accidental because the TNA as an unregistered political party was merely using the FP’s symbol as a matter of convenience.

Upon seeing CVW’s adamancy, Senathirajah promised to get back after consulting his colleagues. Subsequently it was suggested to CVW on the telephone that Provincial Council member Emmanuel Arnold be made the minister. But no agreement was reached. Arnold, said a Jaffna Roman Catholic resident,

“is immensely popular as head of the St. John’s College Old Boys’ Association and among Roman Catholics in the old Jaffna Electorate. He has high potential to be MP if the First Past the Post system is reintroduced with electorates. I am sure this is part of Senathirajah’s thinking. I commend Senathirajah for his long-term thinking”

However CVW did not accept Senathirajah’s recommendation.

Such well-publicized peace-pipe-smoking meetings between Senathirajah and CVW were belied by press reports that CVW on the 28th late evening met with the Federal Party’s detractors. That evening saw a gathering at CVW’s home to which only those who supported CVW in this spat were invited. NPC Member M.K. Sivajilingam forcefully said that he wanted a Mullaitivu man to be a minister and that is why he had declined the portfolio offered to him first by CVW. NPC member from Mullaitivu, Kandiah Sivanesan, echoed these views reminding CVW that while speaking at the NPC on the current dispute on 14 May,  CVW himself had voiced the need for a Minister from Mullaitivu. In the event, however, that did not happen and not one of the five members from Mullaitivu was appointed. Nonetheless, Sivajilingam accompanied the new ministers to their swearing in. Unconfirmed reports say that CVW too took some oaths because of the additional portfolios he has taken on.

Be that as it may, the two new Ministers’ period of office is to be just three months. Openings for peace-making as well as revolting will remain as CVW’s supporters vie for office and the new inquiry against the two ministers who escaped CVW’s guillotine is prolonged.

“With this, CVW is more firmly obligated to the Tamil Makkal Peravai and Suresh Premachandran’s Mandayan Group,” noted an analyst who recently organized a discussion on the corruption scandal.

Signs of the impending eruption were seen as CVW readied for the new inquiries he is launching against Fisheries Minister Balasubramaniam Deneeswaran and Health minister Dr. P. Sathiyalingam who had both been cleared by CVW’s initial inquiry. CVW justifies this seeming double jeopardy on the grounds that witnesses did not show up.

Testified one of Dr. Sathiyalingams, supporters

“Tackling Dr. Sathiyalingam would be a tough-sell because of his leadership during the Mullivaikal massacres when he as the government medical officer treating the wounded drew attention to the killings through bombings of hospitals by the government.”

However, that high reputation is presently eclipsed by the new charges of corruption against the good doctor. Thundered CVW at the meeting with his supporters last night, “Even if the two ministers do not show up at the inquiry, the inquiry will proceed and I will take firm action according to the report.”

M.A. Sumanthiran fired a counter-salvo in an interview on 16 June 2017 with the Nation:

“He then published advertisements in the newspapers calling on the public to make allegations against the Ministers. In the subsequent inquiry report, the committee found one Minister guilty of nine or 10 charges of corruption, another Minister of circumventing administrative regulations and exonerated the other two. The committee recommended the removal of the two found guilty. All he had to do was implement the recommendations.

“Yet, he kept the matter hidden for two weeks … and decided to take action against all four Ministers, when two were clearly found guilty and two were not. …

“He has since asked the two found guilty to resign and he has suspended the other two. He has taken action against all four. All five Ministerial portfolios are now brought under him. …

“He is trying to cover up the wrongdoing of the two found guilty by attempting to take all four out.”

Said a Tamil American associated with Wigneswaran’s visit some time back to the US that he could not understand CVW’s erratic ways of seeking funds and inexplicable loyalties to one staffer:

“I am surprised at his play for power. He could make excellent speeches but is too poorly organized to run any administration. He missed many appointments and even a flight, messing up an important meeting in Boston. It is his administrative inability that makes him so dependent on the Australian Nimalan Karhtigesu.”

Between the Tamil American and an FP loyalist, Colombo Telegraph gathers that Wigneswaran took his protégé, Australian Tamil Nimalan Karthigesu, to the UN and adamantly wanted him employed on a Rs. 1 billion project readied for the NPC. The UN refused Wigneswaran’s request based on Karthigesu’s qualifications or his lack of them.

The Australian was asked to leave the room while negotiations were on because he had no standing at the meeting. That meeting with near-assuredly positive outcome, was a fiasco. The NPC lost that money because of Wigneswaran’s stubbornness over insisting on Nimalan Karthigesu’s participation in managing the complex project. Colombo Telegraph reliably learns that it was Nimalan Karthigesu who arranged for Australian experts to assist the handpicked locals to test the Chunnakam ground water and declare it oil free.

The FP-CVW dispute is far from over. The immediate concern will be over whether CVW can appoint his new inquiry committee or, at the NPC too as with Parliament, privilege requires a Select Committee appointed by the FP dominated assembly. The difference is over who picks the people doing the new inquiry.

“Not another expert panel like the Chunnakam experts I hope,” said a civil engineer who always insisted, simply based on appearance and smell, that the Chunnakam ground water was tainted and was subsequently vindicated by other reports from independent experts.

That “Chunnakam Waste Oil in Ground Water” Court case at the Mallakam Magistrate’s on 27 June 2017 was given a “long date” to 29 September because related matters were under hearing at the High Court. (By Muraleetharan Puvinathan)