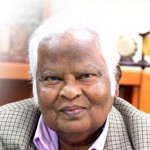 DIG Lalith A Jayasinghe was arrested and is now being remanded for harbouring an offender and aiding the escape of the chief suspect Swiss Kumar, for the gang rape and the murder of 18 year old Sivaloganathan Vidya on 13 May 2015.  The DIG is suspected of having committed an offence punishable under Section 209 of the Penal Code. The relevant part of which is as follows;

“… Whenever   an  offence   has   been   committed,   whoever harbours,  conceals,  assists,  or  maintains  a  person  whome  he knows  or  has  reason  to  believe  to  be  the  offender,  with  the intention of screening him from legal punishment, shall,  if  the  offence  is  punishable  with  death,  be  punished with  imprisonment  of  either  description  for  a  term which  may  extend  to  five  years,  and  shall  also  be liable to fine;…”

This is the first time in Sri Lanka that a serving DIG has been arrested for a criminal offence. However, former DIG Vas Gunawardena was convicted and sentenced to death on charges of abducting and murdering a businessman. Former DIG Anura Senanayake was in remand over a long period and is now released on bail relating to the murder of rugby player Vaseem Thajudeen. Several ASPs have also been convicted or charged with serious criminal offences. A much larger number of OICs have also been convicted or charged with similar serious criminal offences.

The policing service is the premier law enforcement agency in Sri Lanka. Its basic task is to investigate into crimes and also to prevent the occurrence of crimes. The authority of this institution is now being seriously undermined by accusations of crimes being committed by some officers holding topmost high ranking posts within this important institution.

When things go that bad in an institution, which is of such prime importance, it is not enough to take criminal actions against particular offenders. It is necessary to scrutinize what has gone wrong with the whole institution. A policing system is monolithic system which operates on the basis of control from the top to the bottom. It is a strict system of command and control, and actions of the officers of lower ranks are entirely in the hands of officers of higher ranks. The system works on the basis of command responsibility which is a doctrine of accountability of superior officers regarding all others who act under their direction and command. This system can function only to the extent that the principle of command responsibility is respected and maintained within the organization. When officers holding topmost posts are being convicted or charged for serious crimes, what it indicates is that the entire structure of this institution is seriously contaminated and is crying for reforms.

Speedy actions to undertake such reforms is required not only to maintain the integrity of the institution but also to maintain the security of the people. When the people see that the protecting institution is itself contaminated and is led by some criminals, the only natural consequence to be expected is that they will have contempt, instead of confidence in this institution. The existence of such a situation is seriously damaging to the entire nation.

The state cannot maintain its authority, when the people lose faith in the basic institutions that constitutes the mechanism or the apparatus of the state. Crisis of policing is a crisis of the basic structure of the state in Sri Lanka.

No government can properly govern if the basic institutions of the state, such as the policing system are so badly damaged, to the extent that these institutions are incapable of delivering the basic services that they are designed to deliver.

The President, the Prime Minister, and the entire government have not taken a single step to ensure reforms in the important institutions of the state such as the institution of policing. That is what makes the talk on good governance just an empty talk.

Anyone who believes that there can be good governance in a country that has a bad policing system is suffering from serious and dangerous delusions.