It is one thing to say that some politicians are making their children ashamed of them. It is more meaningful to tell the public why this is so. What makes children react to parental actions in a manner that causes the children to virtually turn their backs on politician fathers? 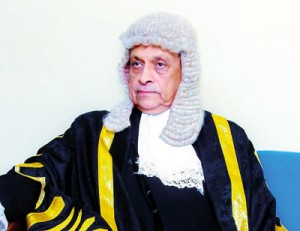 If what Speaker Karu Jayasuriya says is true there must be some strong reasons why children are not enamoured of their fathers who are elected representatives.

That surely is the crucial question. What is it in the behaviour of some MPs that cause such negative reactions in their children to the extent that they seem to dissociate themselves with the conduct of their MP fathers?

Usually children dote on their parents and parents on the children. But if what the Speaker says is true – and there is no reason to disbelieve him – there must be some strong reasons why they are not enamoured of their fathers who have been elevated to the status of elected representatives.

Unfortunately this vital part of the story went unanswered. So the journalists and the wider public were left stranded as it were, without the Speaker’s opinion, candid or otherwise, on the underlying reasons.

But one can discern the reasons and Speaker Jayasuriya’s concern from remarks he has made about the conduct of parliamentarians especially after rowdy outbursts that have been more conspicuous in the last two to two and half years.

His castigation of such unruly behaviour and the call for more civilised conduct at least within the parliament chamber, particularly in the presence of school children following proceedings, provides a clue to what he should have told the journalists but did not.

Perhaps he felt it was unnecessary to expatiate on a subject that the audience was well acquainted with especially the high-handed and condescending conduct some of our parliamentarians.

The notoriously outrageous conduct of some of those elected and others rejected by the people but who have wormed their way into parliament, is a subject of serious concern to the country. It is also one that is condemned by those committed to exposing the moral corruption that pervades our political life and is spreading fast to other layers of society.

It is not that Karu Jayasuriya should not have said what he said. Actually his condemnation of the lack of moral scruples, honesty and integrity in some of those elected as the country’s law-makers is conveyed through the attitude of the children and their need to distance themselves from the fathers.

He is right, of course. As the custodian of the institution that makes the laws which are later broken or dismissed as unwanted hurdles to private aggrandisement, he is probably articulating his own thoughts when he talks of the shame felt by the progeny. They are concerned that in the eyes of the public the sins of their fathers are visited upon them.

Mr. Jayasuriya is referring to the second generation. To those children who probably live under a different value system and a code of ethics, their political fathers do not possess a modicum of redeeming merit.

If one assumes that there are some children who really feel ashamed of their fathers as politicians as the Speaker said they must surely be few and far between. It would seem like a microscopic number. One really does not know because one rarely if ever hears about such morally upright children who are not in the limelight.

If children of law-makers actually turn their backs on their elected parent – and perhaps that person’s spouse too – it is because they live by different moral standards that reject the moral turpitude that is all too evident from the life-style of the corrupt and coarse.

But this shame that Mr. Jayasuriya speaks of could be for other reasons too. As public trust in their political parent (parents) diminishes with growing knowledge and awareness of their moral failings, readiness to rob the state and the people while oozing patriotism from every pore, the children hate to be identified as the sons and daughters of the corrupt, venal and brutal.

They would rather stay away from public gaze than have multiple fingers pointing at them as children of the morally damned. The Speaker says they feel ashamed to be identified as the progeny of politicians whose public image evokes disgust.

They might well say in the adapted words of Shakespeare’s King Lear “How sharper than a serpent’s tooth it is to have a thankless father”.
Would they in their time stay out of politics or would they enter the fray in order to try and change the political and moral climate that has brought today’s politicians to eternal disrepute?

No doubt Speaker Jayasuriya would know of political children – if one might call them that – who having observed at first hand the behaviour of a parent and his/her hangers-on and feel thus.

They may have confided their displeasure to Mr. Jayasuriya or their aversion to corrupt and violent politics had somehow reached the Speaker to make him convey his views to his journalist audience.

One feels that those Mr. Jayasuriya referred to constitute a small group, so small as to not even make a modicum of a difference to those who continue to rape the country while preaching homilies about fighting corruption, eliminating the crooked and ending nepotism.

In fact they would be completely overshadowed by those children who revel in the power, privileges and perks of their MP fathers. It must surely be admitted that this yahapalanaya government which has shouted itself hoarse about the fiscal deficits facing the country have gone out of its way to heap benefit upon benefit on parliamentarians.

It is just the other day that another supplementary estimate went through parliament for still more vehicles for ministers and even officials. It is this same government that lavishly increased the allowance of MPs which was naturally passed by parliament without demur.

How often has the country heard of sons of MPs and even ministers who engaged in brawls in nightclubs, smashed up the places and were even aided and abetted post-facto by the father of some juvenile thug?

These sons who delude themselves that they are entitled to exercise the powers of their fathers, to enjoy the privileges bestowed on the minister or MP as the case may be, and conduct themselves as though just descended from Olympus, have become the bane of the country.

As though being saddled with corrupt, callous and useless MPs is not enough of a sin to befall the country, it has increasingly had to tolerate the shenanigans of their sons who behave as though the country owes them a debt of gratitude.

How often have we heard of the sons being accompanied on their nefarious piratical adventures by official security assigned to the father or mother and joining in the various fracases around town including assaulting innocent customers.

All this seem like more badges of courage to be added to the family escutcheon.
When outrageous conduct hit the headlines, it is often the media that is blamed for distorting information or for fake reportage. In order to cover up the damage and destruction caused by such violent revelry, immediate investigations are announced.

That is the last one hears of these investigations and inevitably the thuggish sons of thuggish fathers escape unpunished or with a mild admonition until the next incident often by the same culprit.

That is not all by a long shot. Sons and daughters set up businesses that invite public advertising from state institutions while more established and more capable rivals are ignored. Such is the invisible and indirect wielding of power that corruption and cronyism thrive in a political climate that less than three years ago promised transparency, accountability and impartiality.

Such is the fear instilled in public officials and state institutional heads by the sons and daughters of politicians that officials cringe before them and obey every command.

How people of an earlier generation must long for the days when ministers did not generally abuse their power as happens today and the spouses and children of the highest in the land conducted themselves in a manner that brought credit to the country.

Let me provide a couple of examples. President Jayewardene wielded immense power and claimed that the only thing he could not do was to make a man into a woman and vice versa.

Yet his son Ravi who passed away a few months ago was an example of how a decent son should behave, keeping well out of the political scene and his father’s politics.

Similarly I had never heard of the children of President Chandrika Bandaranaike Kumaratunga involving themselves in politics or using power and influence to order officials around.

When U.B. Wanninayake was finance minister during an earlier UNP government his son applied to join the Bank of Ceylon. Somebody, I cannot now remember who, asked the minister to “put in a word” as the saying goes, on behalf of his son. The upright Mr. Wanninayake refused to do anything of the sort saying that if his son could not get the appointment on his own merits he does not deserve the job.

That is the kind of politicians the country had then. They and others like Mr. Wanninayake were a credit to Sri Lanka. It is the country’s loss such politicians have become an endangered species unless those sons and daughters who eschew the political morality of their fathers take to clean politics.

What did surprise me was the remark that the Speaker reportedly made that day. He is reported to have said that some countries look to Sri Lanka’s parliament as a model to be emulated, perhaps.

Heaven help those countries. We are beyond salvation.