The deployment of a staggering number of 798 armed STF personnel to conduct a search of two wards of the Welikada Prisons in November 2012, in violation of all laid down procedure to be followed when Prison premises are searched, led to the riot there which resulted in the death of 27 inmates and caused injuries to many more, the report of a fact-finding committee states. 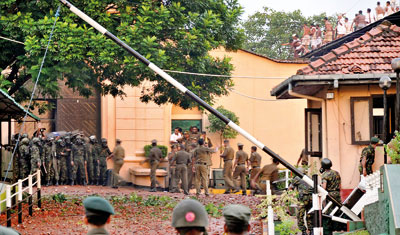 The 3-member committee, to look into facts pertaining to the incident that occurred at the Welikada Prison on 9.11.2012, was appointed by former Minister of Justice Wijeyadasa Rajapakshe. Its report was tabled in Parliament in February this year by Prime Minister Ranil Wickremesinghe. The Sunday Times filed an application under the Right to Information (RTI) Act to obtain a copy from Parliament early this month.

Among the disturbing findings of the Committee was evidence that, in the case of six of the inmates killed in the incident, T-56 automatic weapons had been introduced where the bodies were found, with a view to projecting they had used the weapons, and thus justify their extermination. As evidence, the Committee produced photographs in which the weapons are absent in the photos taken by the Prison Depts’ official photographer, soon after the incident, but the T-56 are clearly seen near the bodies when the Magistrate visited the scene for the inquest, a few hours later.

Also going by the evidence of the Judicial Medical Officer (JMO), the Committee concluded that three of the inmates were selectively killed.

Among those who gave evidence before this Committee were former Defence Secretary Gotabaya Rajapaksa as well as senior Prison and Police Dept officials but when it came to the question of who had authorised the use of STF personnel to conduct the search, they either said they were acting on the directive of more senior officials or, claimed they were unaware of any such decision.

As the Committee said in its Report, “Ironically, the responsibility with regard to the use of the STF had been found to be nobody’s liability in this instance”
Mr Rajapaksa was among the witnesses who denied knowledge about either the search operation or, the use of STF personnel, stating it was not legally permissible to carry any arms and ammunition into a Prison facility. He had also told the Committee that it was up to the Prison Dept officials to prevent the entry of STF or police officials with arms to conduct a search.

STF Commandant- Deputy Inspector General of Police (DIG-Rtd) Chandrasiri Ranawana in his evidence, told the Committee that the search conducted on 9.11.2012 was not done on its own accord by the STF, but on the direction of the then Defence Secretary, with the coordination of DIG Nimal Wakishta [Director- State Intelligence Service (SIS) and DIG Terrorist Investigation Division (TID) during 2012], after a series of discussions with senior officers of the Prison Dept.

The evidence by the then Commissioner General of Prions, P.W. Kodipilli, also supported the position of the STF Commandant, that the need for conducting search operations using 798 STF personnel was made at a meeting held at the Ministry of Defence on 17.07.2012, at which Mr Rajapaksa was present.

Mr Kodippili admitted the search was organised under his direct intervention and supervision, in a very secretive manner, to prevent it being leaked to other prion officers including the then Superintendent of the Welikada Prisons, Gamini Jayasinghe.

The Committee which heard from nearly 90 witnesses including inmates, Prisons, Police and STF officials, Defence Ministry and Prisons Reforms Ministry officials as well as JMOs and fingerprint experts, made several observations and recommendations in its report.

The Committee said it found a request had been made by Mr Kodippili to the Inspector General of Police (IGP) N.K. Illangkoon about three months prior to the incident, seeking the assistance of 300 STF personnel to conduct a combined search operation covering Colombo Remand, Magazine and Welikada Prisons. However, the IGP had responded unfavourably to the request, stating that “search operations inside Prison facilities have to be conducted with a proper action plan and coordinated in an organised manner by the STF and Prison officials. However, in the search operation conducted on 9.11.2012, which took place when the IGP was overseas on an official assignment, the number of STF personnel had risen to 798, to conduct the search at only the Welikada prisons, that too only in two wards, namely ‘L’ ward and Chapel building. The Committee held the view that the presences of 798 STF armed personnel inside a prison facility will itself give way for the formation of a turbulent situation among the inmates, and the use of a paramilitary unit to conduct a search in a civilian institution, was an “appalling decision”, while their entry into the Welikada Prison with weapons, was in total violation of the law.

The Committee also condemned the firing of tear gas into two padlocked cells at the Prison, which was identified as the main cause for the provocation of the inmates. “This action of the STF could be classified as an act of inhuman treatment, as the inmates could not move out of a closed area to surmount the effects of tear gas smoke. It was evident from the evidence that transpired before the Committee that the tense situation within the Welikada prion was a creation of the STF and not the inmates.”