Priyanka Fernando a “Persona Non Grata” for committing serious offences under British Law, abusing diplomatic immunity in the UK and committing war crimes and crimes against humanity in Sri Lanka and therefore to curtain his leave to remain in the UK.’ 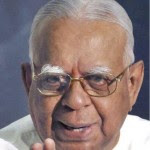 Leader of the TNA R. Sampanthan

This follows Fernando making a throat-slitting gesture towards protestors demonstrating outside the Sri Lanka mission in London on the country’s Independence Day.

While the UK High Commission in Colombo had lodged a protest with Sri Lanka’s Ministry of Foreign Affairs upon which the Government was to recall Fernando, President Maithripala Sirisena revoked the decision.