Coalition among opposition parties can tilt balance in councils?

But coalition among opposition parties can tilt balance in councils

The recently formed Sri Lanka Podujana Peramuna (SLPP) led by former President Mahinda Rajapaksa seems to have swept a majority of the local government wards in the south at yesterday’s countrywide polls, according to early results that began trickling in late last night.

However, in some councils though the SLPP won most of the wards under the FPP (First Past the Post) system, when the PR (Proportional Representation) quota of votes are counted, a combined Opposition can have more seats in the council than the SLPP.

For example, at the Ambalangoda Urban Council where the SLPP won 10 of the 12 wards, its total number of seats in the 21 member council remain 10, while the UNP won two wards and got four more elected under the PR totaling six, while the UPFA won three seats and JVP two under PR so that the UNP-UPFA-JVP will have 11 seats in the council, one more than the SLPP.
In the north, the Illankai Tamil Arasu Kachchi (ITAK) was set to sweep the poll. Similarly, in the Manthai East Pradeshiya Sabha, the ITAK won four seats under FPP and two more under PR totaling six seats in a 13 member Sabha. 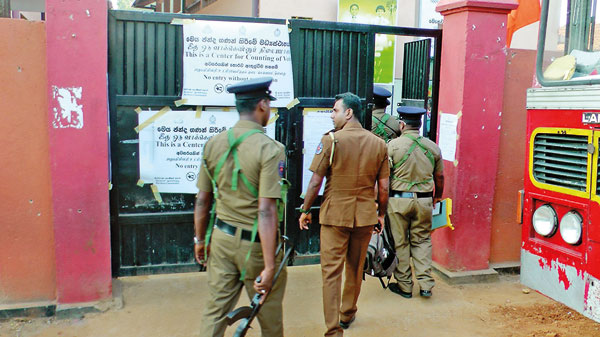 Security was tight at this counting centre in Hambantota. Pic by Rahul Samantha

The UNP won four wards under FPP, SLFP won two under PR and EPDP won one seat under PR which means ITAK will have six seats, but the UNP-SLFP-EPDP combine will have seven seats.

The SLPP, the breakaway faction of the Sri Lanka Freedom Party (SLFP) took an early lead winning most of the wards in the Southern, Uva, Sabaragamuwa, North Central and North Western Provinces, while the United National Party (UNP) fared better in urban areas and was expected to win some of the bigger municipalities.

The SLFP-led United People’s Freedom Alliance (UPFA) of President Maithripala Sirisena took a heavy beating across the island, coming a weak third while the Janatha Vimukthi Peramuma (JVP) came fourth in most provinces outside the North and East. In some councils, however, the JVP was expected to pip the UPFA to third place.

There was no official announcement of the election results even by midnight on Saturday. Additional Elections Commissioner M. M.Mohamed said the delay was due to the complexity of allocating seats under the Proportional Representation (PR) system for 40 percent of the seats in the councils.

In the Jaffna district, the ITAK took 25 of the 34 councils while there was a close contest for the Jaffna Municipal Council between the ITAK and the All Ceylon Tamil Congress (ACTC).

The Chavakachcheri and Point Pedro Urban Councils were won by the ACTC, while the EPDP won in the Kayts and Delft islands.
In the Kilinochchi district, three Praadeshiya Sabhas were won by ITAK while in Vavuniya one UC and three PSs were won by ITAK.

In Mannar, the ITAK won two PSs and the Mannar UC, while the UNP won the Mussali and Manthai Praadeshiya Sabhas.
Around 70 percent of the 15.8 million registered voters cast their votes at yesterday’s elections.

The election, the first to be conducted under a new electoral system, drew more than an expected number of voters. In almost all districts, the percentage of voting was higher than the percentage at the 2012 local council elections.

In the Northern Province, elections to some local council were being held after a lapse of nearly 40 years. Here, too, the voting was high with a turnout in the region of 70 percent.

Police strictly enforced election laws, leading to the arrest of 39 people, including eight candidates while five others were arrested for photographing the ballot paper after marking it.

Election monitoring groups said yesterday’s elections were largely free of violence while voters too showed a keener interest to cast their ballot.

President Maithripala Sirisena cast his vote at the Sri Vidyaloka Temple polling booth in Polonnaruwa last morning. He spoke to journalists afterwards and noted that this was the first occasion after many years that when the country saw a peaceful campaign from nominations to Election Day.

He said that after the conclusion of the poll, the Government would work with local councils for sustainable and all-inclusive development in their areas.

The President said he was confident voters would ensure a resounding mandate for the Sri Lanka Freedom Party, the United People’s Freedom Alliance (UPFA) and allied parties.

Prime Minister Ranil Wickremesinghe cast his vote at the polling center at the College House of the University of Colombo. He told journalists that with the introduction of the mixed electoral system, the local council elections were held in a peaceful atmosphere. He said that under the new system, voters would get a representative responsible for their areas.

Former President Mahinda Rajapaksa who led the election campaign of the Sri Lanka Podujana Peramuna (SLPP) cast his vote at the polling booth at D.A. Rajapaksa Vidyalaya in Medamulana. He said he was confident of a decisive victory for the SLPP that the election would be a stepping stone for a major political revolution in the country. He is expected to hold a news conference today to claim victory at yesterday’s polls.

Janatha Vimukthi Peramuna (JVP) Leader Anura Kumara Dissanayake voted at a polling center at Abeysinharama Vihara in Panchikawatte. Mr Dissanayake said the importance of a political change had been deeply felt by the public. The people were actively hoping for such a change and in this backdrop, the JVP was confident of making a strong showing at this election.