The Local Government election – the first election in Sri Lanka after the Parliamentary election in August, 2015 – was a wake-up call for the incumbent government in more ways than one.

The large majority of Local Government bodies – 249 out of 340 – was won by the Sri Lanka Podujana Peramuna, the party supported by members of the Rajapaksa family.

In the context of a Local Government election, the outcome of the polls was a significant victory for the Podujana Peramuna which was launched as a breakaway party, under a proxy leader. None of the members of the Rajapaksa family officially obtained membership of the Podujana Peramuna although they threw their weight behind the party.

UNP General Secretary Kabir Hashim, issuing a statement a day after the election, said the UNP accepted the result and considered it a warning. It was also reported that President Maithripala Sirisena and Prime Minister Ranil Wickremesinghe, during their internal meetings with Parliamentary group members, stressed the importance of ‘understanding’ the message given by the public.

Prime Minister Wickremesinghe, when he made a special statement to the media at Temple Trees on Friday evening, admitted that the election result carried a message to the government.

He said, the delays in action against bribery and corruption allegations, the cost of living and the Treasury Bonds controversy made a negative impact on the UNP’s election campaign.

The Premier said, the party had embarked on reforms to build a new generation of leaders and the government would move forward, correcting its mistakes. President Sirisena too echoed the same sentiments when he met a group of UPFA stalwarts at his Paget Road residence on February 11.

The President promised to bring about ‘drastic reforms’, not only in the country but also within the government, to reverse the current situation. 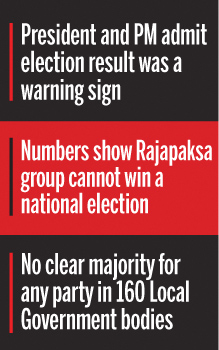 However, it is important to analyze whether the results of the Local Government elections suggest the possibility of a ‘Rajapaksa comeback’. Many Rajapaksa supporters claim, the result was a clear sign that the Rajapaksa group will win the Presidential and Parliamentary elections in 2020.

Issuing a press statement on the outcome of the LG elections, Minister Samaraweera yesterday noted that a resounding majority of citizens numbering 6.1 million (55.3%), marched to the polls last Saturday and voted against a return to Rajapaksa rule.

It is also important to understand that the United National Party, the SLFP group supporting President Sirisena, the Janatha Vimukthi Peramuna, the Tamil National Alliance and the Sri Lanka Muslim Congress fought together against Rajapaksa rule on January 8, 2015.

That means the Rajapaksa group, which fell out of power over three years ago, is still not in a position to win a Presidential election and a united force against the ‘family rule’ can still defeat the ‘Podujana Peramuna’ Presidential candidate with a comfortable margin.

Taking note of the election results, Samaraweera however said; “Today, the people have told us that we have not done enough.

“Despite the sincerest of efforts to inject haste and independence into a dilapidated justice system over the past three years and empower the police with the tools they need to successfully investigate complex crimes, murderers and fraudsters remain at large. Despite our government being the first in the nation’s history to insist that Ministers must resign from the Cabinet at the first sign of wrongdoing, and indeed, the first to investigate allegations of corruption within its ranks with such vigour, justice is yet to be served,” he added.

He stressed, “the message from the people has sunk deep into the UNP” and that the Government is “committed to taking drastic measures to fulfil the promises made three years ago and maintain the public trust”.

“Our duty is to broaden our own voter base by delivering results, while joining hands with all honest and democratic political forces to uplift our motherland and ensure that Sri Lanka never again returns to rule by the sword.

That is our calling and we must not fail. Our democracy, our Republic, depend on it,” he added.

“On January 8, 2015, fifty one percent of Sri Lankans voted for the vision put forth to them by our Unity candidate, Maithripala Sirisena: that the time for dictatorship in our country was over, and that those committed to re-establishing democracy in Sri Lanka must unite to ensure that government serves all of the people, and not a single family and their loyal disciples.

On that day, the United National Party, several stalwarts of the Sri Lanka Freedom Party, the People’s Liberation Front, the Sri Lanka Muslim Congress, the Tamil National Alliance, the Democratic People’s Front, and over 30 political and civic bodies came together to prove that Sri Lankans shared their vision of a Sri Lanka that was ruled by law and not through fear.

“We promised to amend the Constitution to restore independence to the public service, abolish the Executive Presidency, and enshrine the rights of all Sri Lankans into the legal bedrock of our legal system.

We promised to bring those who robbed the coffers of the Treasury to justice. We promised to hold accountable those who quenched their thirst for power with the blood of brave journalists and peaceful protestors.

Most of all, we promised you a government that would be free of the rampant corruption that defined the decade that came before us,” he said, emphasizing the efforts made in the right directions to fulfil the above obligations.

“As we embark on this chapter in the story of our democracy, Sri Lanka can be proud of two remarkable things we saw last Saturday.

The first is the conduct of an election under the auspices of an independent Elections Commission and the Police Service. Never before has a government shied away from manipulating public personnel, funds, resources and state media into an organ of their political ends.

We hope that under these independent bodies, Sri Lanka has seen the last of corruption, intimidation and violence marring our elections,” he concluded.

Although the Rajapaksa group claims that their party won the large majority of Local Government bodies across the country, at least 160 of the 340 LG bodies have been returned with no party or independent group establishing a majority of seats – a hung result.

However, it is now clear that political parties will run into a serious crisis when appointing heads for these Local Government bodies.

Local Authorities Elections Ordinance, in Clause 66 D explains the procedure for the election of Mayor and Deputy Mayor at the first meeting or other meeting of a local authority.

“(1) The first meeting and any other meeting that may be convened under section 66 C until the election of a Mayor, shall be presided over by the Commissioner of Local Government. (in this section referred to as the ‘presiding officer’).

(3) The election of the Mayor of the Council under subsection (2) shall not take place, unless there is present at such meeting a quorum consisting of not less than half the membership of the Council.

(4) Any member of the Council may, with his consent, be proposed and seconded for election as Mayor by any other member present at the meeting.

(5) Where only one member’s name is proposed and seconded for election as Mayor, the presiding officer of the meeting at which the election takes place, shall declare that member elected as the Mayor.

(6) Where two or more members’ names are proposed and seconded for election as Mayor, the mode of election shall be by open voting, and the presiding officer shall take the votes by calling the name of each member present and asking him how he desires to vote and recording the votes accordingly. A member may decline to vote and in such a case, the presiding officer shall record the fact of such member declining to vote.

(7) At the end of the proceedings for the election of a Mayor, the presiding officer shall declare the result of the voting.”

It is apparent that political parties will have to resort to horse-trading when drawing the support of members of other parties to appoint heads for Local Government bodies.

The UPFA, under President Sirisena’s directives, have already sent a strong message to its Local Government members. The UPFA said, its members who support other political parties to secure power in hung LG bodies would be removed immediately.

The importance of avoiding crossovers at the Local Government level was discussed widely between President Sirisena and a group of UPFA seniors. They stated, the UPFA’s ‘support’ was the decisive factor in many LG bodies and the party should not undermine or underestimate this power.

It will also bring into question whether the party with the greatest seats but not a majority, is able to establish control of the authority.

Commenting on the issue, TISL Executive Director, Asoka Obeyesekere said: “As a result of the postponement of elections, the public had been denied representation at the local government level for over 2 years, seriously hampering access to public services.

At this juncture, it is crucial that the delivery of public services takes precedence over political horse trading.”