The Tamil asylum seeker forcibly deported from Australia last week is at liberty in Sri Lanka, but facing ongoing harassment and intimidation from security forces, human rights advocates have reported.

Shantaruban was handcuffed and forcibly removed from Australia last week, after five years during which he said he was not allowed to properly present his claim for asylum.

He was detained upon arrival at Bandaranaike airport in Colombo last Thursday and questioned by members of Sri Lanka’s criminal investigation department for more than four hours.

Since being released he has not felt safe to return home, but has been living in a coastal village north-east of Jaffna where he has family connections. 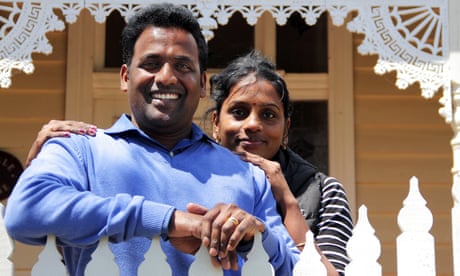 Tortured by police, separated from his family for years, but Tamil refugee still says nandri – thank you

He has twice been visited by state security officers at the house where he is staying. On the first visit, officers checked through his phone and queried his activities during the Sri Lankan civil war which ended nine years ago.

On the second visit, the security officers took the details of Shantaruban’s wife and his children, including the school they attend.

KS Ratnavale, a human rights lawyer who is representing Shantaruban, said security officials had come from Point Pedro naval camp in Jaffna and repeatedly asked questions he had already faced in earlier interrogations.

“His wife is distraught. She is wondering whether it is safe to return home,” Ratnavale said.

Shantaruban, who goes by one name, arrived in Australia by boat in 2012. He is a former member of the Liberation Tigers of Tamil Eelam – the Tamil Tigers – the separatist group whose members have faced persistent post-war persecution in Sri Lanka.

“This is a clear attempt at intimidation and harassment,” said Aran Mylvaganam, a spokesman for the Tamil Refugee Council said, adding that Shantaruban’s situation was entirely predictable and highlighted a “callous indifference” by the Australian government.

“The culture of reprisal in the security forces runs deep. Returned Tamils, particularly those associated with the LTTE, face dangers that have been well-documented by the UN and human rights groups.”

After Shantaruban’s arrival in Australia, he was released to live in the community, but was re-detained in 2015.

He fled Sri Lanka fearing repercussions from government security forces for his involvement with the LTTE, a separatist army that fought a brutal, and ultimately unsuccessful, 26-year war for independence until 2009, when it was defeated.

His claim for refugee status was rejected by the Australian government.

But he says he was unable to properly present his claim for protection because he was initially fearful to declare his association with the LTTE, fearing reprisal.

In October last year the UN committee against torture issued an interim measure request to Australia, asking it to “refrain from returning [Shantaruban] to… Sri Lanka while his complaint is under consideration”. It later withdrew its request after submissions from the Australian government.

The Australian government maintains it does not remove from the country people requiring protection and does not return any person to danger.

The Sri Lankan government has consistently denied mistreatment of returning Tamils is occurring.

If everyone who reads our reporting, who likes it, helps fund it, our future would be much more secure. For as little as £1, you can support the Guardian – and it only takes a minute. Thank you.