The Government moved to appoint commissioners to a permanent Office on Missing Persons this week, empowered to investigate and trace tens of thousands of cases of persons forcibly disappeared during two insurgencies and a 26 year civil war. The OMP mechanism and the Enforced Disappearances Bill that will criminalize the act of forcibly disappearing persons in Sri Lanka for the first time offers the best chance in a long time to help thousands of families find answers and to say, as one nation, “never again”

The untimely loss of a loved one can be unbearable. But the experience is even more horrific to those whose kith and kin have simply disappeared without a trace, perhaps never to return. While many families have languished in their pain over the years, this week they came one step closer in a long journey of discovery to find out what may have happened to disappeared family members. 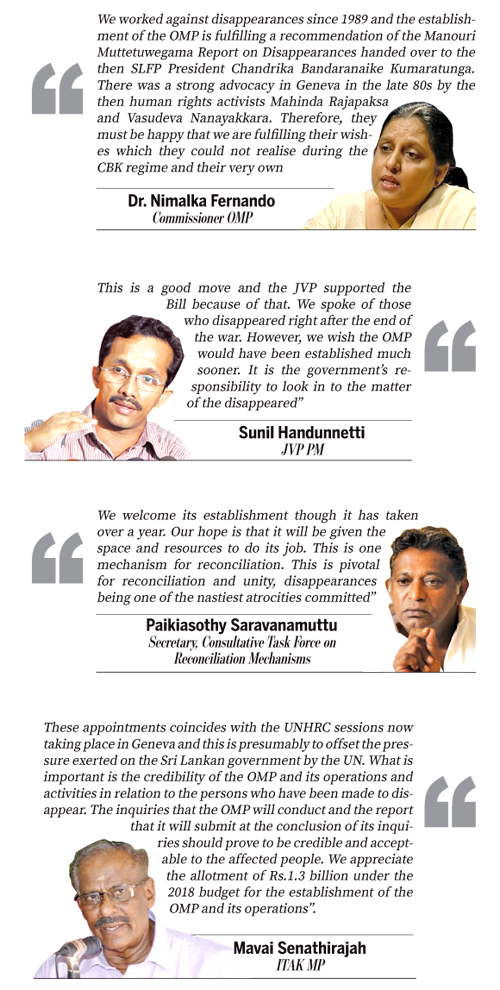 But perhaps, the most significant appointment to the OMP is that of Jayadeepa Punniyamoorthy, a victim of disappearances herself. The only victim to be appointed, Jayadeepa’s husband, Ramalingam disappeared on May 23, 2009, just five days after the war ended. Relating her experience to a newspaper Jayadeepa, 32, who works as a counsellor at the Women in Need in Batticaloa had recalled how she had visited various army camps looking for her husband and has since become an avid campaigner for those left behind by disappeared family members.

Given an allocation of Rs 1.3 billion to establish the OMP which came into effect on September 15, 2017, the Commissioners were selected in an open and competitive process conducted by the Constitutional Council of Sri Lanka, and were nominated for appointment, to President Sirisena.

Part of the mechanism, as the first of four pillars of Sri Lanka’s Transitional Justice Mechanism, the OMP will be an independent body reporting to Sri Lanka’s Parliament. The task expected of the office is to bring a degree of closure to surviving family members of Sri Lanka’s internal conflicts and set the stage for sustainable reparations for victims and their families.

Despite all the brickbrats and opposition faced by the National Unity Government its stance on the OMP was made clear by Minister Mangala Samaraweera, the then Minister of Foreign Affairs in his speech when presenting the Bill on the Office on Missing Persons which was tabled in Parliament on August 11, 2016. “The Bill is the first step in healing our own nation and its people so that we could face the challenges of the future as a united nation” he said, adding that the tears of relatives do not differentiate between ethnicity, religion, race or caste.

With the commissioners receiving their appointments from the President this week, Chairman of the OMP, PC Saliya Peiris said, the commissioners would meet this week to discuss the future course of action along with setting up the OMP in order to commence its functions. To begin with, the newly appointed Commissioners of the OMP, which is a permanent office with a mandate that does not expire, will have to find an office space, it is learnt. Other technical matters will also have to be decided, including how it will conduct its inquiries and whether it will use information and documentation gathered by previous commissions investigating disappearances as a starting point.

This move is perhaps a sigh of relief to the families of those missing over decades. According to the Paranagama Commission appointed to investigate into missing persons; close to 19,000 persons have been confirmed to have gone missing during the three decade war, while the UN Working Group on Enforced or Involuntary Disappearances has recorded 12,000 cases of enforced disappearances related to the Janatha Vimukthi Peramuna (JVP) uprisings and during the armed conflict between Liberation Tigers of Tamil Eelam (LTTE)and the Sri Lankan government forces from 1980 to 2010.

According to one of the newly appointed commissioners to the OMP, rights activist and veteran disappearances campaigner Dr.Nimalka Fernando it was a challenging task set before the OMP. “The Act which established the OMP has provided the framework for our operations and we have to work within that framework” she said, adding that the OMP is not only responsible to Parliament but to the families of the disappeared.

Dr. Fernando says, the establishment of the OMP is a significant historic step for Sri Lanka. “This is a national mechanism which will assist the country to put an end to disappearances and address the grief of families.” she said.

Along with the appointment of the members to the OMP comes the twice delayed tabling of the Enforced Disappearances Bill this week.

While the Government presented the International Convention for the Protection of All Persons from Enforced Disappearance Bill in Parliament on March 7, 2017 the Bill was scheduled to be taken up for debate on July 5 and September 19, but the Government had to defer it amidst objections of various groups.

While the Enforced Disappearances Bill must be supported by a simple majority of the House to be enacted into law, the Bill, if enacted, will give effect to the UN International Convention for the Protection of All Persons from Enforced Disappearance that the Government of Sri Lanka ratified in May 2016. Under the Convention, the country will have an obligation to enact local laws to criminalize enforced disappearance and offer protection to victims of the crime.

Until now, disappearances are investigated under the crime of “abduction” in the Penal Code, legal experts said. If the Bill is passed in Parliament on Tuesday, enforced disappearances will become a criminal offence in Sri Lanka for the very first time