The recent interviews of would be Presidential Candidate and former Secretary to the ministry of Defence Gotabaya Rajapaksa with Kalum Bandara and Gagani Weerakoon shows him up for his lack of any political acumen.

It would be most dangerous for Sri Lanka even to consider such a pseudo patriot ever running for any political office let alone for Presidency. 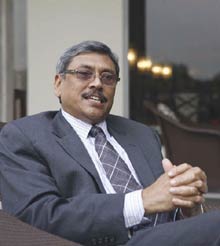 The erstwhile younger Rajapaksa in his interviews say ON RECORD that the USA and other Western Countries brought pressure on the Mahinda Rajapaksa government to stop the war during the last stages and that they (including him) did not allow it and the rest is now history.

Gotabaya Rajapaksa is highlighted in the media carrying floral tributes and such from Temple to Temple seeking to veer Buddhist majority to accept that Sri Lanka is predominantly for Buddhists only. This is the implied sentiment in capturing the required majority through Sinhala Buddhist votes.

Let us accept that the USA and Western powers did use pressure to stop the war during the last stages as he goes on record. Let us accept that his brother Mahinda Rajapaksa and himself resisted vehemently and finished off the LTTE leadership and thereby won the war. Good.

So if Gotabaya Rajapaksa, the self appointed future leader of the Sinhala Buddhists (the monks think so too as do the extremist Buddhists) did all to resist the USA and Western powers to stop the war during the last stages CONTINUE TO RETAIN HIS US CITIZENSHIP even to this date, as admitted by him?
Is he not the biggest traitor? Should not Field Marshall speak to Hard Talk’s Stephen Sackur the same way Gota did?