– As the search for justice for victims of the Tamil genocide continues.

– While the application of ‘universal jurisdiction’ by individual states to prosecute war criminals must be pursued rigorously, the way forward for member states of the UN Human Rights Council is to lobby the UN Security Council for an ICC referral or for the  establishment of an international special criminal tribunal for Sri Lanka.

UNHRC’s Prolonged Reliance on Sri Lanka to Prosecute Its Army Cannot be Sustained:

The 37th session of the UN Human Rights Council ended with no firm action taken against Sri Lanka, despite its continued failure to establish a hybrid court – member states missing the opportunity yet again to apply the necessary pressure required on Sri Lanka including imposing strict benchmarks and time lines for implementing transitional justice commitments it signed up to in October 2015, among other, the establishment of a special domestic court with “foreign participation”.

An honest look at the proceedings, in Geneva, relating to Sri Lanka, is telling – it’s manifestly obvious the UNHRC’s prolonged reliance on the Sri Lankan government to prosecute members of its armed forces and senior political leaders – those responsible for committing mass atrocities, cannot be sustained any longer.

Everyone knows such prosecutions, founded on international law, won’t materialize in Sri Lanka, not now, not later, certainly not by the March 2019 deadline – even with further extensions thereafter (which is most objectionable and should be vehemently opposed) definitely not through a domestic judicial mechanism with “foreign participation”, as set out in resolutions 30/1 and 34/L1 – and indisputably not as a means for litigating the charge of genocide.

A Hybrid Mechanism is Definitely Not in Sri Lanka’s Agenda:

Sri Lanka’s silence on the issue of a hybrid court at the UNHRC this session was deafening. Its new Foreign Minister Tilak Marapana’s subtle reference to it, in his statement to the Council when he said, “Sri Lanka’s judiciary and law enforcement mechanisms are fully capable..of advancing justice,” speaks volumes on how it intends to carry on in the future. A hybrid mechanism is definitely not in its agenda at all:

“Sri Lanka’s judiciary and law enforcement mechanisms are fully capable and committed to the process of advancing justice to all concerned. It has a long history of integrity and professionalism and since 2015, steps have been taken to further strengthen its independence. And may I add, Mr. President that all reconciliation mechanisms will be implemented in accordance with our constitution.”

And therein lay the truth. No one needs any further declaration of Sri Lanka’s complete rejection of a hybrid court than that expressed by its Foreign Minister.

If member states search their conscience they would and should know it and any amount of waiting is not going to bring the desired result. The onus is now on member states to turn to the more realistic and credible option, by stepping up to the plate, and working more robustly and constructively towards finding a viable international accountability mechanism to achieve UNHRC’s aim, as an authentic body, that strives to ending impunity for serious human rights violations and taking to task recalcitrant states, in this case, Sri Lanka.

‘Sri Lanka Monitoring And Accountability Panel’ (MAP), an independent group of legal experts with high credentials in the field of international criminal justice, deem an ICC referral to be the route to take, and seriously the only option – this according to its recommendations contained in its 3rd Spot Report released on March 7, 2018.

The panel’s 34 page report, which is virtually a continuing indictment on Sri Lanka, refers to, “the Sri Lankan government’s broad transitional justice agenda,” it co-sponsored in October 2015, which included, “an accountability mechanism to address some of the worst crimes in the 21st century.” The report, ‘a call to act’ aimed at the UNHRC, was seething in its commentary on how Sri Lanka, “proceeded in bad faith, reneged on its international commitments and violated its legal obligations to victims,” making it incumbent upon the, “the UNHRC to lobby the UN Security Council to refer the Sri Lanka situation to the International Criminal Court, as a statement of support to the victims and human-rights defenders seeking accountability in Sri Lanka.”

An avenue designed to make such a referral by the Security Council to the ICC is provided for by the Rome Statute regardless of the fact that Sri Lanka is not a signatory, enabled by article 13 (b): “A situation in which one or more of such crimes (genocide, crimes against humanity, war crimes) appears to have been committed is referred to the Prosecutor by the Security Council acting under Chapter VII of the Charter of the United Nations.”

OHCHR Doubts Sri Lanka Will Implement by March 2019, Plugging Universal Jurisdiction: The reckoning that a hybrid court is not possible or even plausible in Sri Lanka was plain for all to see in Geneva – the chances it could be up and running in Sri Lanka in a year are nil; when one year of the allotted, extended time of two years, has already run out with zero progress. 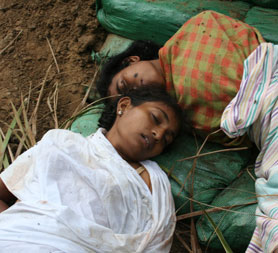 Based on Sri Lanka’s continued non-compliance, it was not surprising, that both the High Commissioner for Human Rights, Prince Zeid bin Ra’ad and his deputy Kate Gilmore in their oral statements, called for the application of “universal jurisdiction” (that involves individual countries taking the initiative to prosecute alleged war criminals of foreign nationality when found visiting or resident in the state), both pointing to, “Sri Lanka’s inability to demonstrate a willingness to address impunity..the continuing allegations of torture and surveillance and the lack of sufficient progress in implementing critical confidence-building measures, such as the release of land, the repeal of the Prevention of Terrorism Act and the solution to the pending cases under the Act,” with Ms Gilmore reiterating the importance of a, “special court involving international practitioners,” and the, “use of universal jurisdiction if no special court was established.”

Expressing concern on many fronts, Ms Gilmore called upon the UNHRC, “to continue to focus its attention on the human rights of the people of Sri Lanka and in particular on the processes in place for accountability and reconciliation,” “regretting” very much, “the slow progress in establishing transitional justice mechanisms,” and, “doubting, in the absence of concrete results or publicly available drafts of legislation,” that the, “transitional justice agenda committed to by the Government under this Council’s resolution 30/1 could be fully implemented before the next report in March 2019.”

No matter the undertakings the Sri Lankan delegation purports to give in Geneva, clothed in meaningless assurances that have no merit, they are but a damp squib considering the reality on the ground; taking all four pillars of transitional justice: criminal justice, truth, reparations and guarantees of non- recurrence, from Marapana’s report it seems, Sri Lanka brings out its props in time for UNHRC sessions and then hibernates until next time. Sri Lanka’s statement was woefully short on substance and in many cases unsubstantiated and as the deputy High Commissioner for Human Rights stated many proposed legislative enactments to implement transitional justice commitments are still in the draft stage, including the ‘Prevention of Terrorism Act’ which we will examine in Parts of this article to follow.

A compelling reason why Sri Lanka can’t be trusted to prosecute members of its armed forces is its propensity to “stand by its army”, a fact that was acknowledged after the March session, in the government’s own news portal:

“This government has not allowed a single person to be investigated for their conduct of the war, despite several false allegations to the contrary. That is what it means to truly stand by the armed forces, and not to just use our brave men and women in uniform as political tools to win votes.”

Just as disturbing is the Sri Lankan government’s grand design to pull away from UNHRC’s oversight – Special Assignments Minister, Sarath Amunugam returning from Geneva as part of the Sri Lankan delegation, in dramatic fashion, stated, the government doesn’t plan to go to Geneva beyond 2019, again rejecting any interference from outside:

“We have taken many positive decisions over the years. The court system is now independent. In light of this, we oppose continually going to Geneva. We want to bring this to a closure.”

Gio-Politics or Bilateral Trade Must Not Get In the Way of UNHRC Action:

These compelling reasons and more should hammer home the reality of what the UNHRC is facing which member states can’t turn a blind eye to anymore – that to the question whether Sri Lanka can be relied upon to prosecute members of its armed forces, the answer will be a resounding no. Geo-politics or bilateral dealings to foster trade with Sri Lanka or to peddle influence in the region must not get in the way of doing the right thing by victims. The fear of Rajapaksa making a comeback, after making gains at the recent local government elections, should not mean letting impunity reign, turning the back to Sri Lanka’s crimes and overlooking the mass atrocities that were committed by its army and senior political leaders, feeling a compulsion therefore to protect the Sirisena regime. At no time should that be a consideration.

This is also a plea to the leaders of India and Tamil Nadu to step up and support the Tamil people in their search for justice.

When at the 40th session of the UNHRC, when the High Commissioner for Human Rights will be producing a comprehensive report, followed by a discussion on the implementation of resolution 30/1, it’s not enough anymore merely to rollover a stale resolution expecting Sri Lanka to deliver. Keeping Sri Lanka’s agenda beyond March 2019 means moving forward with an international accountability system.

The time has come for every member state from now on to start lobbying the Security Council for an ICC referral or for a special criminal tribunal and vote with their conscience on that day when the issue comes up in March of 2019, making the right call by the victims in a new resolution which spells out the specifics for an international accountability system.

When, Sri Lanka’s overall delivery of its commitments to the UNHRC has been miniscule, its unsubstantiated claims of compliance leave much to be desired, and major transitional obligations still remain unfulfilled, a hybrid court definitely off the cards, showing no desire and demonstrating no will to address impunity, the shaky ruling coalition failing to infuse confidence that it would in the future, member states must turn to seriously supporting an international judicial mechanism, that involves member states persuading the UN Security Council to refer Sri Lanka to the International Criminal Court – that being the right thing to do in the name of justice for the victims of the Tamil genocide.