The CID is nearing the end of its investigation into the May 2008 abduction and assault of former deputy editor of The Nation newspaper, Keith Noyahr, according to a detailed three-hour oral submission made to the Mount Lavinia Magistrate’s Court by Senior State Counsel (SSC) Lakmini Girihagama last Wednesday on behalf of the Attorney General. 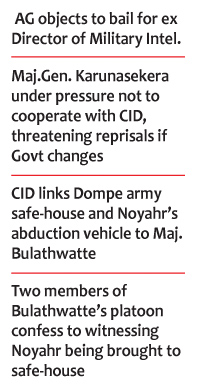 Objecting to bail being granted to former Director of Military Intelligence, Major General Amal Karunasekara, SSC Girihagama laid out the evidence collected by the CID over the span of their 18-month long investigation, which has so far led to the arrest of eight serving and former officers of the Directorate of Military Intelligence, on charges of complicity in the abduction and assault of Noyahr on May 22, 2008.

According to CID investigations, Noyahr was abducted from his home in Dehiwela and removed to a Military Intelligence safe-house in Dompe in a white van by a platoon led by Major Prabath Bulathwatte.

The CID established through mobile telephone records that several members of Major Bulathwatte’s platoon had kept Noyahr under surveillance as he travelled throughout Colombo on Monday May 21, and up to his return to Dehiwela on the night of May 22, before abducting him as he tried to enter his residence at around 10 p.m. Telephone records, thereafter, showed the abduction team had been travelling to Dompe at high speed.

The CID, thereafter, found the safe-house, which matched the description provided by Noyahr, and had been taken on rent by two members of Major Bulathwatte’s platoon, with the rent paid for by Military Intelligence. Investigators also recovered the vehicle in which Noyahr was abducted, which had been leased by Bulathwatte’s cousin.

At least two members of Bulathwatte’s platoon including a driver have confessed to having witnessed Noyahr being brought to the safe house, bound and gagged, during the CID investigation.

Noyahr was beaten and interrogated at length about his journalistic sources in the defence establishment, told he would be killed, and given options for the disposal of his body.

Noyahr, stripped naked with his eyes bound, then heard a telephone call being received by a senior officer, after which he was told that he would not be killed and would be released and returned to his family.

The CID has established that the call overheard by Noyahr was placed by the then Military Intelligence Head Amal Karunasekara to Major Bulathwatte.

The impetus for Karunasekara to place the call is said to be a telephone call that he received from then Chief of National Intelligence Kapila Hendawitharana, who in turn had been called by Defence Secretary Gotabhaya Rajapaksa. These phone call records were extensively reported in the Sunday Observer of April 15, 2018.

The CID reports that the likely reason for the Defence Secretary to order that Noyahr’s life be spared and that he be released was the fact that just prior to calling Hendawitharana, Gotabhaya Rajapaksa had received a telephone call from President Mahinda Rajapaksa, in response to a plea for Noyahr’s life by then Public Administration Minister Karu Jayasuriya.

Arrested by the CID on April 5 and currently in remand custody, Karunasekara is reported to come under heavy pressure not to cooperate with investigators. At least one lawyer close to an unnamed target of the investigation is known to have conveyed to him that cooperation could lead to dire consequences for him in the event of a change of government, authoritative sources told the Sunday Observer.

Many of these same defence and intelligence heavyweights have featured in news reports of other attacks on media personnel. It was reported last April that when Major Bulathwatte’s platoon was accused by a witness on January 18, 2010 of complicity in the murder of former editor Lasantha Wickrematunge, the then Defence Secretary on the same day authorised the appointment of Major Bulathwatte to a foreign embassy.

At the time, officials urged that he be permitted to depart on diplomatic assignment in haste, citing ‘national security reasons’. However, Major Bulathwatte never left to assume his post.

The investigation into Wickrematunga’s murder was transferred out of the CID to the TID, and the witness who implicated Bulathwatte’s platoon, Pitchai Jesudasan, was arrested and thereafter, died in custody.

Bulathwatte was never questioned by the police until the Rajapaksa administration was defeated in 2015.

Meanwhile, the same order transferring the Wickrematunge murder investigation to the TID in 2010 also transferred the dormant investigations into the abduction of Keith Noyahr and assault on former Rivira Editor Upali Tennakoon to the TID.