Police and forensic experts trying to solve the mystery of the deaths of two young British rugby players are seeking a three-wheeler driver who could shed light on the players’ last movements after they were picked up from a night club and dropped off at their hotel. 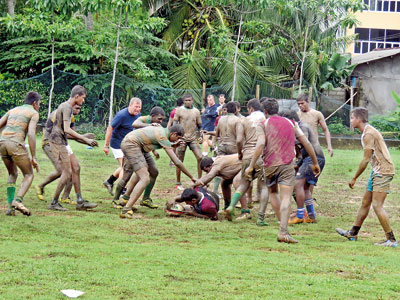 After the tragedy: The British team conducting a rugger training session on Friday at the St. Aloysius’ College grounds in Galle

Thomas Howard, 25, and Thomas Baty, 26, who died two days apart after experiencing breathing difficulties, were picked up outside the night club Cleopatra in Kollupitiya in the early hours of last Sunday by the three-wheeler.

“The CCTV footage analysed so far shows the two British nationals being dropped off at Kingsbury Hotel where they were staying, but the number plate of the vehicle is not clear. We are trying to locate the three-wheeler,” a senior officer involved in the investigations said.

He said police believe the trishaw driver could provide vital information including information on whether the two passengers travelled to any other location before arriving at the hotel and also whether the driver had provided any substance to the players.

He said that they were confident of locating the three-wheeler soon, enabling them to get more information required for the investigations.

The hotel room had been checked and nothing suspicious had been found. Police have recorded statements by hotel staff.

Police have also sought CCTV footage from the CR&FC club where the two sportsmen had played a friendly rugby game and later had dinner.

Most of the team members had subsequently gone to the night club and thereafter returned in batches to the hotel.

The two rugby players who suffered breathing difficulties were the last to return.

On Sunday morning, they experienced breathing difficulties and were rushed to hospital by the hotel management.

Thomas Howard died on the day of his admission while his colleague passed away on Tuesday.

On Friday, the bodies were released from the undertaker and flown back to Britain for the final rites.

The two ruggerites were part of a 25-member group consisting of 23 players and two coaches who were here not only to play two friendly rugby games, but also to donate rugby equipment required for training of players in the south.

According to a senior official of Sri Lanka Rugby (SLR), the local sports governing authority had received a request from Colombo Rugby and Football Club (CR&FC) seeking sanction to play a couple of matches on behalf of the visiting English county team.

“We reacted positively and granted permission to play rugby matches as they (CR&FC) requested. It is indeed saddening to hear two of the players from the visiting team had to face a tragic end. Upon inquests, we (SLR) are convinced that the conditions the two players had to undergo were not related to any on-field activities.

However we are deeply disturbed by the loss of two players, our thoughts are with their families,” current SLR Vice President, Lasitha Gunaratne, said.

Despite the loss of the team members, the rest of the team conducted their coaching programme in Galle on Friday.

Condolence messages have continued to pour in after the deaths of the two rugby players. The official twitter site of the Durham Country Rugby Football Club (DCRFC), the second oldest club in Durham County had received many of them.