Trekking the Khumbu Wall is always at the risk of death or I would say death is imminent! Some Ice Walls are of 80 or 90 degree slopes. The worst is and one could not really believe is that we see ourselves how some of our colleagues embrace death before.

Sri Lankan mountaineer Johann Peiris reached the 290030 feet high summit of Mount Everest at 5.50 in the morning of May 22 according to Nepalese time. A professional coiffure and model, Johann is a swashbuckling sports adventurer as well. His efforts to trek the Everest Summit in 2016 was botched due to a technical defect in his oxygen tank, when he had only 448 meters to reach the ‘Promised Land!’. His companion Jayanthi Kuruuthumpala of his team was crowned as the first Sri Lankan to conquer the hazardous mission to Mount Everest. This is however, Johann’s first interview to the print media after his adventurous victory.

Q: Now you are well-known in the country. Would you like to introduce yourself?

A: I am Johann Peiris. I am working as a beautician for the last 30 years.

Q: What do you think of your conquering Mt.Everest?

A: I failed in my first attempt in 2016 but subsequently I won the challenge. It is a great pride for Sri Lanka to have its flag hoisted on the top of the world. 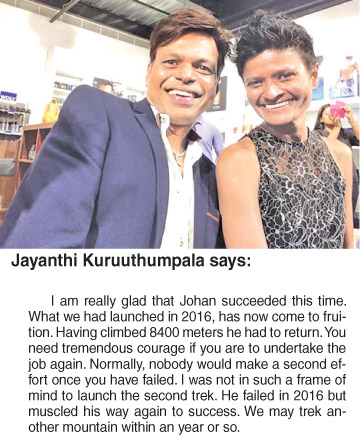 A: Last time when Jayanthi and I had only 400 meters to reach the summit, I had to give up our hopes as there was a technical defect in the oxygen tank.

Q: What was the support she gave you when you made your second attempt?

A: She was with me right through to support me. When I went to Kathmandu, she was there to meet me. This is a victory for both of us.

Q: Only after a lapse of two years of Jayanthi’s victory, you could reach the summit?

Q: When did you make up your mind to accept the challenge, after you failed in the first opportunity?

A: I really did not want to pursue my efforts to trek the Everest. On second thoughts after about six months, I started again. It was then only I really felt the gravity and hazards of such a daring undertaking task. I think most people fail to understand the rigours of such an adventurous effort.

Q: Trekking Khumbu Ice Wall was the most challenging. What were the difficulties you came across?

A: Yes, Khumbu is the most dangerous part of the adventure. Avalanches are a regular phenomenon and we used a ladder to climb the Ice Wall. About one hour after we returned to the Base camp a large portion of the Ice Wall slid down. These are the dangers that confronted us.

Q: There are different stages for the mountaineers to pass through on their reach to the Everest Summit. What are those stages?

A: There are four camps. You have to pass through them before you get to the last stage.

Q: What was the support your companion extended to you?

A: Right through he was in our fold. They are indispensable

in such an arduous task. They are in fact ‘Omniscient’ in one way or the other.

Q: This is a swashbuckling adventure in which you naturally court death. Did you not experience fear of death?

A: Trekking the Khumbu Wall is always at the risk of death or I would say death is imminent! Some Ice Walls are of 80 or 90 degree slopes. The worst is and one could not really believe is that we see ourselves how some of our colleagues embrace death before our own eyes. It is heart-rending. Our guide pointed to locations where there were over 200 bodies of mountaineers according to them. I too saw four bodies.

Q: After you climb 8000 feet high, the need is there to change the oxygen tank which entails certain difficulties. Have you experienced such situations?

A: Of course, nothing of that sort happened to me. This time I had equipped myself very well to face whatever challenges.

Q: How were you benefited from the experience of the other members of you team?

A: For two months we shared our experiences and it was of tremendous help to us.

Q: What are the other mountains you have trekked?

A: Almost all except for the ‘Saptha Kanya’ mountain range in Sri Lanka. Kilimanjaro and Islands’ Peak are notable among those I had trekked.

Q: Mountaineering as a sport is not so popular in Sri Lanka so far. Have you any plans to promote it?

A: Already we act as a team to promote this sport and encourage those who are interested in it.

Q:How did you launch your training after six months?

A: In fact, I learned very many new things. We need a great deal of training as we geographically live more or less at sea level. I was lucky to have a new team of trainers under whom we had completed a 1 ½ year training programme.

Q: How many of you trekked the Everest this time?

A: There were altogether fifteen in my team. But most of them fell sick and withdrew.

Q: From which countries did they hail from ?

A: There were American, French and British nationals and and an Indian national and myself from Asia. My Indian friend fell sick & returned home.

Q: What is next on your agenda?

A: No special plan as such. I need a rest when I returned to Sri Lanka to reinvigorate my health. This is our hobby in which Jayanthi and I are engaged and at least once a year we trek a mountain. When I am back to normal in my health I shall decide on my next move.

Q: How was your childhood?

A: It was my father who encouraged and rendered every help to me in this daring sport. In fact, I accompanied my father on his mountaineering campaigns which evoked this interest in me.

Q: This is a highly expensive sport. Who extended support to you?

A: This time we received support in large measure from many quarters on the initiative of the Prime Minister. I am thankful to the patronage & support provided to me by Hayleys and AIA Insurance.

Q: Yours is an unsurpassed victory. What kind of welcome do you expect in Sri Lanka.

A: I do not expect anything because it was my aim to undertake such a dauntless task. I thought I could reach the Everest Summit this time due to my first-hand experience with Jayanthi last time.