JAFFNA: What an opportunity- the chance to own Sri Lanka’s oldest Italian Fiat car in Jaffna – and that too, one that is only functional, old Italian car. Sixty-year old Kumarasamy Ravichandran, a resident of No. 906/12 Point Pedro Road, Jaffna, is the owner of this car.

K.Ravichandran and the Fiat Car

Mr. Ravichandran says the car has manual horn and lights and still in running condition. It has two engines, two gear boxes and two differentials. This car was made on 1926 and first purchased in 1932 by the first owner from Colonial Motors;

He purchased the car in 1990 for Rs.225,000. This is the only car with “A” serial number in Sri Lanka, he said. The car’s hood tinkering work is now underway, he added. One of the army chiefs based in Jaffna has expressed willingness to buy the car at a price of Rs. 4.5 million from him, he added. If you want to learn more on classic old cars and how to make a profit, just navigate to these guys.

Mr. Ravichandran, who is in the car business, says he lost another British made Austin 8 model car in the Wanni during the last battle in the North.

When he went to the Wanni (Vavuniya-Kilinochchi), heavy fighting was on between LTTE and security forces in Jaffna. He had taken the car through Kilaly lagoon (those days Jaffna people used this lagoon to leave Jaffna).

Recently he heard, his car was in the safety of the Keppaapilavu Army camp. He has written a letter to the Keppaappilavu, Army Commander; and he was thereafter allowed to see his car.

Going down memory lane, he recalled that he used this Austin 8 for wedding ceremonies which were held in Wanni and he has visited the temple festivals in Wanni including the Watraapalai Amman temple and Madu church.

Mr. Ravichandran is currently engaged in importing car parts from England and selling it to Jaffna garages and car owners to earn a living. Here are some of the Garage Door Services You Should Not Ignore in order to maintain your garage door in good condition for a long time.

He was in London for 12 years. During his visit to London he was interested in seeing the old cars in Britain and now planning to visit London again for the same purpose. 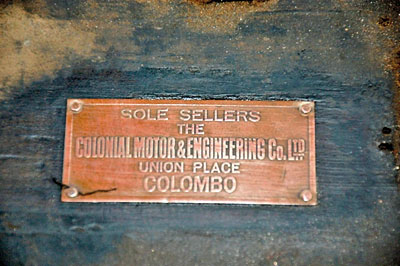