Skip to content
The historic Dutch Fort of Jaffna, recently restored at a cost of Rs 104 million is emerging as a bone of contention, with the military trying to relocate troops to the archaeological site,
in order to release occupied private lands back to their rightful owners. Regional politicians and civil activists are strongly opposing the move saying it would increase the military footprint in the formerly embattled town and hamper tourism activity

Its recent request to relocate several small camps in the Jaffna peninsula into the historic Jaffna Fort, is threatening to set off a new wave of protests against the heavy presence of armed forces personnel in the formerly embattled region. The controversial relocation plans have re-energised residents strongly opposed to continuing militarisation of the Northern Province nearly a decade after the war ended, while archaeologists and historians fear the Fort’s structural and archaeological integrity will be compromised by the presence of troops within and also hamper the heritage site’s tourism potential.

However, the Sri Lanka Army maintains that the request was part of its effort to hand over private land occupied in the North back to their rightful owners. While opinion surrounding the issue remains deeply divided, Government officials assure that no final decision has been taken regarding the issue yet, despite widespread report to the contrary.

The Jaffna Fort located near the lagoon is the second largest Fort in the country. Originally built by the Portuguese in 1619, it was later said to have been expanded by the Dutch during the second half of the 17th and the 18th centuries. According to archaeology experts, it is the only Fort in Asia to have an outer moat. The Jaffna Fort was battered and mostly destroyed during the war. The LTTE siege of the Fort in 1990 at the beginning of Eelam War II, the daring missions by the Air Force to relieve troops trapped within and the eventual rescue mission by the Army code named Midnight Express is now part of revered military history and legend. However, these episodes also are testimony to the potential for destruction when a historical site is turned into a military battleground.

Prior to 1948, a number of administrative offices of the British government were located within the Fort. Today, it is home to a small military subdivision, two offices belonging to the Department of Archeology, and two converted container offices of the Central Cultural Fund as well as 225 tombs of fallen soldiers. Buildings inside the Fort, including the Governor’s Residence (Queen’s House) and the Dutch Reformed Church were all destroyed during the war. 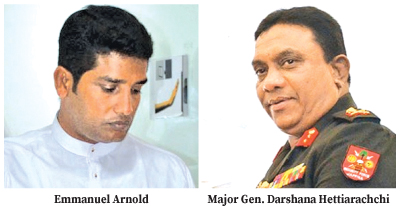 Following the war, restoration of the Jaffna Fort commenced in 2009 and ended in 2014 with the support of the Government of the Netherlands. The Fort was restored at a total cost of Rs 104 million, of which the Government contributed 42.2 million. According to the Department of Archeology further restoration of the Fort continues, and will only be completed in about five years. It is in this scenario that the Army has now requested a plot of six acres out of the 62 acres belonging to the Jaffna Fort including its buffer zone.

According to Commander, Security Forces Jaffna, Major General Darshana Hettiarachchi the request was made to the Northern Province Governor Reginald Cooray in a bid to release the private land occupied by several smaller camps in the area. The Army has up to date released 94 per cent of land once occupied by them back to the original owners following the war, Maj. Gen. Hettiarachchi noted.

“We want to further release lands that continue to be occupied by the Army” he said adding that if the camps can be moved to government owned land these plots can be returned to the people. The land where the Sinhala Maha Vidyalaya of Jaffna is located will be among the land which may be released, including several residential areas. “It may not be an extensive area but still we want the people to have back what is theirs,” he said.

However, the request has garnered much opposition in Jaffna, particularly among regional politicians. Jaffna Mayor Emmanuel Arnold was one of the first to voice his dissent. “I challenged such a move when it was suggested at the District Development Committee meeting chaired by Prime Minister Ranil Wickremesinghe recently,” he said. According to him the Jaffna town already has a strategic development plan which hopes to promote the Fort as a tourist attraction. “So how can we let the Fort be converted into a military base?” he questions. While opposing the Army relocating to the Fort, Mayor Arnold went on to say that Army bases within the town were a disturbance to the daily lives of the people.

Also, expressing his displeasure at the possibility of the Army occupying land within the Fort, Chairman, Northern Provincial Council (NPC) C.V.K Sivagnanam says, the common sentiment among the general populace is not favourable of the move. “The Fort cannot be converted to a military base” he said, adding that if the Army is returning land occupied by them, it does not make sense for them to demand more land from the same area. He says, the military in the North should be reduced, and a policy to relocate them instead, was not acceptable.

Former Opposition leader of the NPC, S. Thavarasa was of a similar view. However, his concern appeared to be more on the site’s value as an archaeological site and possible negative effects the troops may have on it. The Jaffna Fort has already faced difficulties in being named as a UNESCO World Heritage Site due to the close proximity of several structures, including a place of worship, the Police Station and the Duraiappa Stadium, he explains.

“It is an archaeological monument, therefore, I don’t think it is a good idea for troops to be relocated there” he said. Pointing out that there was no military within the Fort prior to the war, he suggests, a national policy must be implemented regarding archaeologically important sites and their development.

Others such as, civil activist in the North, M. Sooriyasegaram are worried that tourists may be discouraged from visiting the site due to military presence. “I am not opposed to the military but due to this reason I think they should not be relocated there” he said. According to him it is a good tourist attraction in the area but military presence could mean it would be difficult to draw visiting crowds.

While protests were organized in the area last week by the Tamil National People’s Front led by S. Kajendran who went gung ho claiming that a decision has already been made to hand over land within the Fort to the Army, speaking to the Sunday Observer Jaffna District Secretary N. Vethanayahan refuting these allegations said no such decision has been made yet. This was confirmed by the Department of Archaeology.

According to the Acting Assistant Director, Department of Archaeology Jaffna, Palitha Weerasinghe, no such decision has been made yet. He says the protestors had confused the request of land by the Army with the recent granting of permission to the Army subdivision already located within the Fort to construct several temporary prefabricated houses after they were moved out of the building called ‘Queens House’ located within the Fort. “It was near collapse so we had to move them out as their lives were at risk as well” he said adding that its restoration is now in progress.

According to the Army the subdivision located within the Fort has around 30 soldiers at present. Permission to construct these temporary houses had been granted on July 9, after which protests against the Army’s request cropped up.

“They have confused the two issues,” Weerasinghe said.

While no permission has been granted to handover land to the Army, Weerasinghe says, a number of Forts around the country already have military cantonments such as in Galle, Kalpitiya and Trincomalee.

According to him their presence has not compromised the structural and archaeological integrity of the sites and instead, is managed well through the resources available to them. “One of the best examples is the Fort Hammenhiel in Jaffna maintained by the Navy” he pointed out.

But while Hammeheil and Kalpitiya are some of the best preserved Forts in Sri Lanka to date, they remain inaccessible because they are military or naval garrisons.

Weerasinghe says, the armed forces regularly approach the Department of Archeology about regulations pertaining to the archeological sites they occupy. The Department never allows any activity which could be harmful to valuable historical structures. “Anyone operating within these sites must adhere to Department regulations,” he said.

While the Department is tasked with managing archeological sites, national security provisions were the army’s preserve, Weerasinghe explained. “It is the Army Commander that best knows what the best positioning of the Army for security purposes is” he said.

But with opposition mounting against moves to relocate a military garrison within the historic Jaffna Fort, the proposal appears to have been suspended momentarily. As far as the military is concerned, this means, owners of the land now occupied by the military which was tipped for release, may have a longer wait, while the army seeks out another area for relocation.