The fire risk in high rise buildings in Colombo is very high according to Dr. David Kirkham. Why? Because many developers are using combustible cladding.

Cladding is a covering or coating on a building. It was made infamous by the Grenfell Tower fire in the salubrious area of North Kensington in West London which left 72 people dead last year. If you want to protect your employees against a related danger, your will like to know that ACS Fire & Security has extremely high standards for its security systems 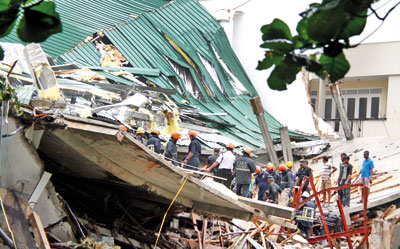 Dr. Kirkham, an internationally recognised expert in fixed fire-fighting systems, has examined in minute detail the causes behind the Grenfell Tower fire, labelled “The Shame” by a public enquiry in the UK. Why shame? Simply because it needed a major disaster for legislation to be changed in the UK.

“I hope Sri Lanka is clever enough not to have to kill its people to put in place legislation that can prevent or contain a major fire,” says Dr. Kirkham at a public lecture at the Institute of Engineers in Colombo last week.

Earlier that day, he had given a lecture to the Colombo Fire Brigade. Let’s hope his thoughts and views are taken seriously with the mushrooming of high-rise apartments in this town. He is worried about the latter, not so much the new hotels which he believes stick to all fire-safety requirements for high rise buildings.

“There is a lot of combustible cladding all over Colombo. I have seen it,” Dr Kirkham observed. “Architects like making things look pretty and the cheapest way of doing that involves plastic. There is a lot of fire-risk in this town.”

Dr. Kirkham adds: “At the end of the day it is all about compartmentation. To keep the fire contained, how good things like the fire doors are. Fires will start, but can they be contained?”

This question failed to be answered in the fire-ravaged 24-storey residential tower block in London last June. Parents threw their children out of the top floors and jumped themselves to escape the fire which had started due to a malfunctioning fridge-freezer on the fourth floor. The fire spread rapidly due to the building’s exterior cladding. It burned for about 60 hours before being extinguished, this despite 250 London Fire Brigade firefighters and 70 fire engines being involved.

Everything which could go wrong went wrong at Grenfell Tower, according to Dr. Kirkham, a leading authority on risk and crisis management. The requirements were to have two staircases through which people could be evacuated in case of fire. It had only one.

“An extra staircase would cost money to put in. As such there was only one. It was all down to money. The exterior cladding had been done to beautify the building which was in a posh part of town – so that it wasn’t an eyesore to people living in multi-million pounds houses. The stay-put advice given by emergency services was a total disaster. There were no sprinklers,” Dr. Kirkham revealed.

Are high-rise apartments in Colombo geared for a similar disaster? Experts in the local industry fear not and are afraid of a Grenfell Tower equivalent happening one day, this despite fire safety legislations being looked at again.

Let’s look at the facts. The Colombo Fire Brigade has only one aerial ladder platform that can reach a maximum height of 54 metres (18 floors) for evacuation from the outside of the building. And it can only pump water to a maximum height of seven floors. Many high rises don’t have fire detection and sprinkler systems.

“Owners of apartments in high rises which don’t have smoke detection and sprinkler systems should bring this to the attention of the Condominium Management Authority. In many instances, unscrupulous developers have taken short cuts and even paid off officials to get their licences and buildings approved,” said a local expert who wished to remain anonymous.

Apparently in Malaysia, when a building needed approval that it had met all safety regulations from the Fire Department, the Fire Chief sent 30 officials to inspect so that no money could pass hands easily.

“We need built-in fire fighting systems for our super high rises. Some developers have stuck to regulations which are now outdated. This is another major problem in Sri Lanka: there is no time limit on building regulations. Sometimes regulations are obtained but the building is not built. There should be a permitted period, and if this expires, new approval must be obtained. At the moment Colombo is not geared to fight high rise fires,” says the local expert.

Yet, Dr. Kirkham believes Sri Lanka is in a much better place than the UK where it needed a major tragedy for the authorities to start getting their act together. It is perhaps a case of history repeating itself. It was only after the Great Fire of London in 1666 that legislation was brought in to contain the external spread of fire. Yet that didn’t help for the residents of Grenfell Tower.

“I’m not here as an expert nor am I here to tell you what to do. But you have got to look carefully at the design and construction of high rise buildings and also have ongoing safety control measures,” Dr. Kirkham suggested.

“We must learn from Grenfell Tower. There were no tests done on the cladding used, the fire doors inside the building were inferior (due to cost cutting), the ventilation system was poor (again probably due to cost) and failed, there were no sprinkler systems (costs).

“It was a very small fire and should have been contained. But it wasn’t and it got out and because of the combustible cladding, it spread rapidly. There was failure in the design and construction of the building, the fire control measures were a failure, the fire brigade response was quick but it failed to put out the fire, the stay-put policy was reversed too late,” Dr. Kirkham said, spelling out the issues which went wrong. He added: “Please don’t let this happen in Sri Lanka.”