Former Army Commander Field Marshal Sarath Fonseka who was questioned by CID today over the abduction of Keith Noyahr said all attacks on media and white van abductions in Colombo were handled by a special group operated under Maj. Gen. (rtd) Kapila Hendawitharana and former Defence Ministry Secretary Gotabaya Rajapaksa. 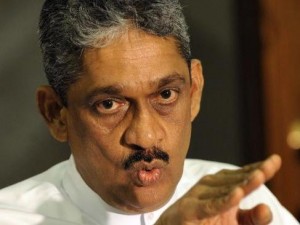 Fonseka, in his four hour statement to the CID today, had said, at the time Noyahr was abducted his sole focus was on military operations in conflict areas, and intelligence operations and surveillance in other parts of the country were conducted under the direct supervision of Rajapaksa.

Such activities, Fonseka had said, had no direct connection with developments in the war zone.

The former Army Commander had said him and Rajapaksa handled two different aspects of the defence machinery at the time, and their boundaries were clearly demarcated.

While denying any knowledge of Noyahr’s abduction or other attacks on media, Fonseka had said the only two people who knew about them were Hendawitharana and Rajapaksa.Hendawitharana, a former military intelligence chief, was a key cog in the country’s defence machinery under the Rajapaksa administration.

Noyahr was abducted just weeks after he wrote a fiercely critical article on Sarath Fonseka’s conduct as the Army Commander. Tortured by the abductors overnight, Noyahr was later brought to Dehiwala, following a high-level intervention by former President Mahinda Rajapaksa. However, when CID asked about his involvement in the matter recently, Rajapaksa said he could not remember any such development.

Meanwhile, making a speech in Parliament on the matter in 2009, former MP Joseph Michael Perera revealed the attacks on media, including the one on Noyahr, had been carried out by a group operating directly under Sarath Fonseka.