Skip to content
By Kasun Warakapitiya and Abdulla Shanawaz

As the dramatic developments of Friday night unfolded, there were mixed reactions from supporters of the two main parties. Supporters of the newly appointed Prime Minister Mahinda Rajapaksa were jubilant, while UNP supporters expressed anger at the turn of events. 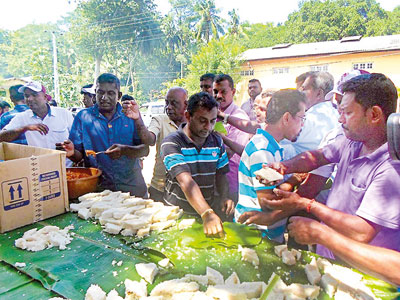 Shortly after the swearing in, Mr Rajapaksa, visited the Gangaramaya Temple and then returned to his official residence at Wijerama Road before making another temple visit– this time to the Abhayarama at Narehenpita. Waiting to receive him were Parliamentarian Bandula Gunawardena and the resident Buddhist monks, two Hindu priests, a Muslim imam and a small crowd of supporters.

Gotabaya Rajapaksa, brother of Mahinda Rajapaksa and former defence secretary, then joined the group for a cup of tea. The newly-appointed PM then rushed to his vehicle after refusing to comment. But his beaming brother, said, the Rajapaksa government was now ready to save the country and give the people what they wanted.

“The appointment of Mahinda Rajapaksa as Prime Minister will greatly increase the people’s confidence as well as the confidence of investors,” he said, while a soft drizzle fell. “Also, Government sector workers and the minorities have nothing to fear. Look, a country that suffered from drought now has rain to mark this change.”

Mr Rajapaksa laughed off the suggestion that he will take up his former post of defence secretary. “There are people for that,” he said. “I will work for the people without holding any formal position or post. We don’t need positions to work. We have experience governing under tougher conditions, including terrorism. This is nothing for us. I have no intention of entering Parliament either. I am just a normal man.”

In a message meant for the international community, Gotabaya Rajapaksa said: “Support Mahinda Rajapaksa. You tried to support some other government and saw what happened to this country. Don’t cause Sri Lanka’s situation to deteriorate further.” 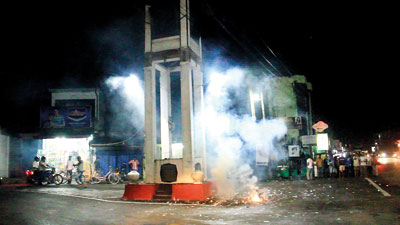 Meanwhile, late on Friday night at Temple Trees, UNP members, one by one, started turning up waiting for Prime Minister Ranil Wickremesinghe who was returning from Galle, after hearing about the swearing-in.

On his return, he told the waiting media he was still the Prime Minister, as he commanded the majority in Parliament. He then entered another conference room with most of the United National Front’s (UNF) leading members.

Among those absent were Minister Sajith Premadasa, who was in Hambantota (he, however, turned up later), Minister Navin Dissanayake, who was abroad, Minister Wijeyadasa Rajapakshe, Minister Ranjith Madduma Bandara and Minister Arjuna Ranatunga. Former Finance Minister Ravi Karunanayake also joined those present a little later

Finance Minister Mangala Samaraweera rushed into the room in a state of panic following a mob attack outside the Sri Lanka Rupavahini Corporation.

“No ne of us in the UNP accept the swearing-in of Mahinda Rajapaksa as PM,” said MP Mujibur Rahuman. “It is against the constitution and, therefore, illegal. The same Maithripala Sirisena who said he would be six feet underground following his exit from the then Rajapaksa government did this shameful act today. He appointed as Prime Minister the very man he said would murder him and his family. Mr Sirisena, just as we, the UNP, brought you to power, we know how to remove you from power too,” he said.

Minister Samaraweera declared that Ranil Wickremesinghe was still the Prime Minister according to the constitution. 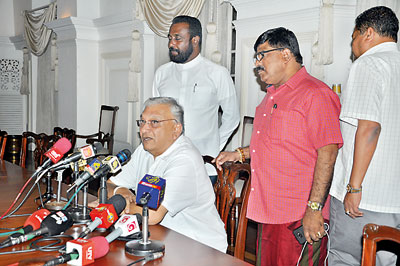 “This issue will be resolved in Parliament where the UNF has a majority, Minister Patali Champika Ranawaka said. “ Unexpected things happen in politics but we know how to face them,” he said.

“Is this the democracy you promised us Mr Sirisena?” asked State Minister Harsha De Silva. “We all formed the coalition for democracy. If we wanted a dictator we would have stayed with the dictator we had. It is an utter shame,” he said.

Two packed buses carrying supporters of State Minister Ajith P Perera, Deputy Minister Palitha Thevarapperuma and MP Mujibur Rahuman had arrived close to Temple Trees last morning. The supporters vented their anger at President Sirisena and said they would prevent Mahinda Rajapaksa or any of his party members from entering Temple Trees. A number of these supporters were allowed to go through the gates after a security check.

In the suburbs of Colombo and other cities, Rajapaksa supporters celebrated with firecrackers and kiributh (milk rice). Cut-outs of Rajapaksa were put up in my areas, and trishaws carried pictures of him pasted on their vehicles. In some boutiques, copies of the gazettes announcing his appointment as Prime Minister were distributed by supporters.