The events of this week in Sri Lanka’s Parliament will no doubt be remembered for a long time to come for its infamy, but it will also be remembered for the extreme courage with which Speaker Karu Jayasuriya and Parliamentary officials who, in the face of unprecedented violence directed at them, braved it all to ensure that Parliamentary democracy did not bow down to thugs and hooligans who masquerade in the guise of elected representatives.

Through three trying days, both the Speaker and the officials were subjected to violence and intimidation by MPs loyal to Mahinda Rajapaksa, as they fought to prevent a vote in Parliament that would have shown clearly that President Maithripala Sirisena’s Prime Ministerial appointee did not command the support of the majority in the House.

It was their desperation to prevent the vote that culminated in extraordinary scenes inside the Chamber on Friday, when the Speaker had to enter the Chamber through a side entrance, surrounded by close to 50 policemen, and conduct a 10-minute session of the House at a makeshift table, while the Serjeant-at-Arms held the Mace.

Parliament became a battleground for the SLFP-UPFA group and the Opposition parties led by the UNP, including the TNA and the JVP, following the Supreme Court’s (SC) interim order on Tuesday, staying the gazette notification issued by President Maithripala Sirisena dissolving Parliament. With the SC ruling, Parliament, which had been prorogued by the President till October 14, reconvened and set the stage for a showdown between the two groups.

While Speaker Jayasuriya recognized Mahinda Rajapaksa as Prime Minister (PM) and his Cabinet members were given seats on the Government side, it was the decision by the Opposition to move a ‘No-Confidence’ Motion (NCM) against Mahinda Rajapaksa, which led to a complete breakdown in Parliamentary procedure.

An NCM moved by JVP MP Anura Dissanayaka and seconded by JVP MP Vijitha Herath was approved by the House on Tuesday, after standing orders were suspended. The Speaker announced that the business of the day would be decided by the House in the absence of an agenda for the day. 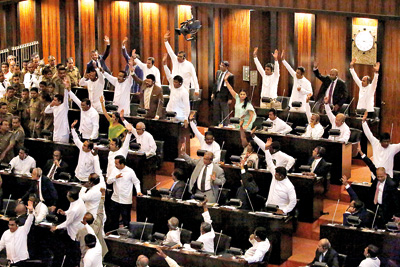 President Sirisena was informed by the Speaker the following day that he accepted that the NCM was duly passed, only to have the President reject it. On Thursday the President, who met with the Speaker and a group of MPs including Champika Ranawaka and Rajitha Senaratna, had advised them to bring in an amended NCM and have it duly passed, and that he would abide by its decision. Hence the Speaker decided to allow a second NCM on Friday, but before the commencement of sittings fixed for 1.30 pm on Friday afternoon, a group of UPFA MPs had already occupied the Speaker’s chair and surrounded the table, while others kept watch at the main entrance, so as to prevent the Mace being brought in.

The quorum bell which began ringing 5 minutes before 1.30 pm continued for over 45 minutes, while the UPFA MPs continued their antics, calling for the arrest of UNP MP Palitha Thevarapperuma, who was seen the previous day with a butter knife in his hands during the melee between the two groups.

It was against this backdrop that extraordinary scenes were played out in Parliament, and the Speaker had to enter the Chamber shielded by a ring of policemen, to hurriedly pass a second NCM before ending the session.

During the brief session, UPFA MPs not only hurled books, water and everything at their disposal at the policemen shielding the Speaker, but also water mixed with chili powder. Opposition Members also came under attack with several of them being injured.

From ousted PM Ranil Wickremesinghe to Opposition Leader R.|Sampanthan to leaders of political parties, opposed to Mahinda Rajapaksa’s appointment, called it the darkest day in the Parliamentary history of Sri Lanka, but those on the other side of the country’s political fault line kept to their mantra, attributing the blame for the disgraceful behaviour by their MPs to the conduct of the Speaker.

The public at large in this country have little regard for politicians, but the developments of this week have not only damaged the image of the politicians, but also done irreparable damage to Parliamentary democracy in the country.

As Speaker Karu Jayasuirya said in his letter to President Sirisena on Thursday, the Head of State has created an unnecessary conflict between the executive and the legislature. Whosoever may be the detractors in Parliament, it is the chain of events set in motion by the President on October 26 that had plunged the country down this abyss and paved the way for the subversion of Parliamentary democracy.

With a little more patience on his part, the President could have worked towards defeating the Budget of the Ranil Wickremesinghe government, which was due in a few days, which would have led to its fall and paved the way for him to legally appoint a PM and Cabinet of his choice. If the wish was to dissolve Parliament, here too, the President could have negotiated with all parties to come to a compromise, to pass a Motion in the House with a 2/3rd majority calling for dissolution. Instead he chose shortcuts and the repercussions of his short sighted and reckless actions have been amply seen in the past three weeks, not only in this country but worldwide.

With the appointment of Mahinda Rajapaksa, who clearly does not command a majority in the House, genies kept contained during the three and half years of yahapalanaya rule have been let out of the bottle, and President Sirisena has little control over them. Their behaviour has, unfortunately, been condoned, not condemned, by the President, Mahinda Rajapaksa and other seniors in the UPFA. Unless senior politicians step forward, irrespective of which side they belong to, things can only get worse for this country. As of now, the dark days of Parliamentary democracy in the country look far from over, and the worst may be yet to come.