Police are probing an alleged plot to throw acid at Speaker Karu Jayasuriya during the commotion in the well of Parliament on November 16, a top parliamentary source said yesterday.

Speaker Jayasuriya was informed of the event and he took additional precautions when he was escorted into the well of the House by a group of policemen, the source said. Asked for his response, Mr Jayasuriya said, “I do not want to comment on that since investigations are under way.” 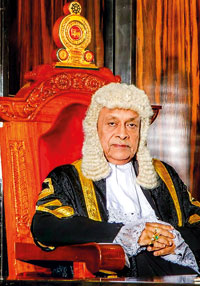 He said there were also investigations into two other incidents — the alleged wielding of knives by MPs Palitha Thevarapperuma and Ranjan Ramanayake. The other, he said, is the throwing of red chilli water on policemen. This hit some MPs too.

The source said information reached Speaker Jayasuriya when officials associated with the resumption of Parliament sittings were making preparations. Around 1.25 p.m., just five minutes before the Speaker was to leave for the well of the House, he had been told that a group of MPs had taken his chair away and blocked the table. They had also closed the entrance.

“An alternative plan was worked out. The Speaker, escorted by a cordon of policemen, was to enter through a side door,” the source said. Just then, a person in robes had come over to the area and had been making a phone call when the Speaker was leaving his office.
It has now come to light that the call had been made to an MP who was in the forefront of blocking Speaker’s sitting area. That was a signal to get ready to cause commotion, the top official said.

Packet of Chilli branded after politico

Sri Lankan parliamentarians appear to have inspired a multitude of messages on the social media after the chaotic events in Parliament in the past weeks. In one message, a packet of chilli powder is branded after the name of a government politician. The marketing line – the product is ideal for heists.

Another is dubbed as the beginner’s kit for MPs with photographs of a packet of chilli powder, a knife and a bottle of Coca Cola. It was Minister S.B. Dissanayake who claimed it was this drink and not chilli powder that was hurled at a posse of police officers. Most Sri Lankans are not likely to believe Mr Dissanayake. They saw on live television that it was not Coca Cola.

Another item that went viral is that of Navin Dissanayake, a former Minister. He rushed to protect his father in law and Speaker Karu Jayasuriya when some MPs behaved in a rowdy way in the House. He is shown displaying a middle finger, which is described as an obscene hand gesture.

He complained to Defence Secretary Hemasiri Fernando, under whose Ministry the Police Department comes, that Chief of Defence Staff (CDS), Admiral R.C. Wijegunaratne, has accused a Criminal Investigation Department (CID) Inspector of having “connections with the Liberation Tigers of Tamil Eelam (LTTE).” 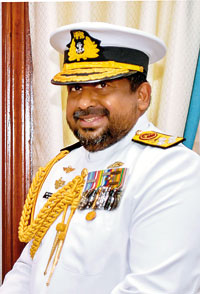 The officer was carrying out an investigation against the CDS. To his credit, IGP Jayasundera cancelled the transfer order when it came to light that the officer was only doing his duty fearlessly.

The Police Chief’s letter to the Defence Secretary and a response from the senior DIG in charge of the CID went viral in the social media. The Sunday Times has been able to verify that both documents, somewhat sensitive in nature, are authentic.

IGP Jayasundera’s letter dated November 19 says, “Chief of Defence Staff Admiral R.C. Wijegunaratne gave me a mobile phone call on 16.11.2018 to notify me about the Security Council meeting discussion held on 13.11.2018. At the meeting, it was said that Inspector Nishantha de Silva, who is attached to the Criminal Investigation Department (CID), had connections with the Liberation Tigers of Tamil Eelam (LTTE).

“According to the telephone call, I called for observations, recommendations and reports on IP Nishantha de Silva by sending letter marked…….to Senior Deputy Inspector General of Police at the CID on 16.11.2018.”  The senior DIG Ravi Seneviratne had forwarded his report where the following information has been revealed, the IGP has said:

There was no evidence confirming that the officer mentioned had LTTE affiliation and he was not involved in any illegal acts. 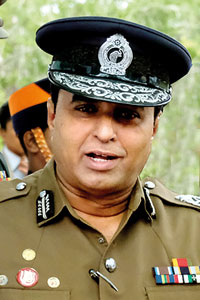 The officer is committed and carries out his duties exceptionally well and prosecutions have been carried out in many of the cases and the offenders have been found guilty.

The allegations made against IP Nishantha de Silva that he is connected to the LTTE are false, baseless and done with prejudice. The Police intelligence or any investigation unit has not forwarded any complaint against this officer.

However, according to the advice issued on 18.11.2018 by His Excellency the President as the Minister in charge of the subject, via a telephone call ………in keeping with service requirements ordered that IP Nishantha de Silva be transferred to the Negombo Police range from the CID.

Among the investigations Inspector de Silva has been handling are the cases against Admiral Wijegunaratne over harbouring suspects who were allegedly responsible for murders, abductions, the killing of journalist Lasantha Wickremetunga and the abduction and torture of journalist Keith Noyahr.

IGP Jayasundera later cancelled the transfer order. Questions over the matter were raised at the post-cabinet news briefing on Thursday. Spokesperson Dayasiri Jayasekera refuted the reports that President Sirisena had given such an order. However, the Sunday Times has confirmed that such an order had gone out to the IGP.

“……… Also the current CDS Wijegunaratne has been named as suspect in case 9527/18 filed before Fort Magistrate courts and the court has ordered to arrest him over charges he provided shelter and security to Navy Lt Commander Hettiarachchi Mudiyanselage Prasad Chandana Hettiaarachchi who is a suspect for abductions and murders and wanted to be arrested by IP Nishantha Silva.

“I am submitting a letter to you…… that the current CDS Wijegunaratne …. is not suitable to hold a high post with responsibility.  I understand that you have already reported this to the Defence Secretary.  It shows that Admiral Wijegunaratne’s attempt is seen as a move to bring influence on the ongoing investigations by making false and baseless allegations against the chief investigating officer.

“It is clear that the actions of the current CDS are a punishable offence under the Witness Protection Act and hereby I am submitting this report to expedite the action against him.”

CID detectives said yesterday they had still not been able to execute a court order to arrest the CDS. He had not turned up at the CID for his statements to be recorded, they said.

MR laments he is like a prisoner
Mama hira gedera inna ekkanekta wada antha thathwayaka inney or I am in a worse position than a prisoner, Prime Minister Mahinda Rajapaksa, declared at the meeting of party leaders represented in Parliament. The remarks came after President Maithripala Sirisena asked him to air his views at the meeting summoned by him at the Presidential Secretariat.

Rajapaksa said even a prisoner is jailed after charges are served and a trial in courts. In his case, there was a vote of no confidence in Parliament but he was not even aware what the accusations were. This was after the Speaker has refused to recognise the Prime Minister and the Cabinet of Ministers.