It was only three weeks ago that I wrote to you last, but I feel I must write to you again, especially as much has happened since then, and because of those events, you are likely to go down in history, in the midst of all your other achievements, as the nation’s shortest serving, fifty-day Prime Minister.

Please don’t get me wrong, Mahinda maama, until the events of that Friday night in late October, you were by far the most popular and most marketable politician in the country, far ahead of the Green Man, Aiyo Sirisena and any of the ‘rathu sahodarayas’. Even now, you still remain quite popular.

That is precisely why we were taken aback when we were told that Aiyo Sirisena had suddenly sacked the Green Man and appointed you as Prime Minister. In hindsight, there was no need to be in such a great hurry. Had you waited patiently, you would have got the job anyway in a little over a year.

Some say that you were worried that the many cases against you and your family members were finally catching up with you and that you were faced with several charges and the prospect of being punished. Still, it is hard to believe that they could now do what they didn’t for the past three years.

Others say you were promised the numbers by SB and Thilanga. If that was indeed the case, you seem to have been taken for a costly ride by them. Obviously, the numbers were not there, which is why vote after vote was passed against you in the House, making it clear that you won’t be allowed to govern. 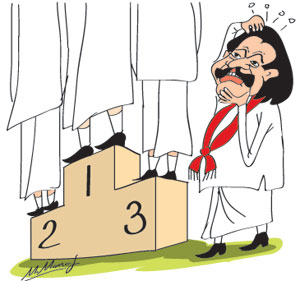 This is worrying because it shows that, even after half a century in politics and being a minister, Opposition Leader, Prime Minister and President, you still make really bad calls. You did so three years ago with an early election. You did so again now, accepting Aiyo Sirisena’s silly plan.

Surely, you must have known that Aiyo Sirisena was not really interested in the country’s best interests or those of yourself. All that he was interested in was seeking a second term for himself, knowing that he needed your support for that because if he ran by himself, he would be an ‘also ran’.

Aiyo Sirisena thought he will try to secure his future by using you as a cat’s paw. His actions since then shows that he is no longer the humble man the majority elected to high office. Instead he is now an arrogant autocrat who thinks he can twist the Constitution to suit his whims and fancies.

He was made to eat humble pie on Thursday when the highest court in the land decided that he had acted unconstitutionally by dissolving Parliament. Even so, he still maintains that he took the right decisions and did nothing wrong. Little wonder then, that some people are questioning his sanity!

Having taken up the post of PM and then having been compelled to relinquish it despite your best efforts to stay put in the job, you must ask yourself whether it was all worth it, Mahinda maama. I think not. In fact, I think you will have to pay a heavy price for what happened in the last few weeks.

In that time we saw you trying to cling on to power by whatever means. We also saw your lapdogs in Parliament resort to despicable behaviour to prevent votes being adopted against you, while you watched, doing nothing. It was as if your election defeat three years ago had taught you nothing.

What we saw in recent weeks was not the Mahinda maama who won the war, the lovable leader who was the ‘appachchi’ who was adored by the nation. What we saw was an old man in a hurry, keen to grab power by any means and a set of minions who were willing to stoop to any level to achieve that.

As the leader who won the war and rid the country of terrorism, you do not deserve that, Mahinda maama. Instead of being remembered for that, many will now think of you as a power hungry dictator. So, Aiyo Sirisena has in fact done the Greens a big favour by reminding the masses of that.

It was good that you decided to leave after the court verdict, though some of your minions opposed that. It would have been better if you took advice from sensible people like Welgama instead of sycophants like Weerawansa. Anyway, it is better late than never, and we still wish you well.

PS – From all that happened in the past few weeks, Mahinda maama, you should have learnt never to trust Aiyo Sirisena ever again. The man who said he will never appoint the Green Man as PM is doing just that today. That man, he speaks with a forked tongue and thinks only of himself – not of the nation!