The Constitutional Council today gave President Maithripala Sirisena a slap in the face when it decided to re-confirm the appointments of Justice Gamini Amarasekera and Justice S. Thurairaja to the Supreme Court. 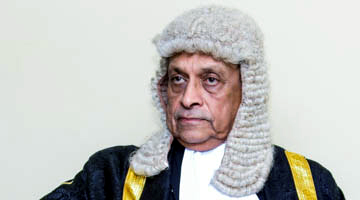 The majority of CC members today decided to stick with the previous decision and disregard any new nominations by President Sirisena. Therefore, when the CC met this morning, it decided to stand its ground and re-confirms the appointments of Amarasekera and Thurairaja.

Colombo Telegraph exclusively reported that President Sirisena, in a bid to manipulate the judiciary, had refrained from appointing Justice Amarasekara and S.Thurairajah as Supreme Court judges despite the CC recommending their names in October.

Without appointing the two judges with unblemished track records, the President had referred two other names, K.K. Wickremesinghe and Deepali Wijesundara, to the CC for approval to be appointed as the Supreme Court judges.

Rajapaksa was present at the CC this morning as well. He, however, had no say on the matter as the large majority of CC members were against the President’s attempts at undermining the council’s authority.

Meanwhile, the CC unanimously decided to approve the appointment of Court of Appeal Chairman Padman Surasena as a Supreme Court judge. Surasena’s name was nominated by Sirisena as the replacement of Eva Wanasundara who retired from the judicial service last month.