Club-record signing Romelu Lukaku scored and put in a dominant display on his second Chelsea debut as they beat Arsenal 2-0 at the Emirates on Super Sunday.

Nearly 10 years after his first debut, £97.5m summer signing Lukaku registered his first goal for the club, tapping home at close range from Reece James’ ball across the face of goal (15) after the Belgian’s superb hold-up play had triggered the move.

James doubled Chelsea’s lead with a clinical finish from the right side of the box with Arsenal too engrossed in Lukaku again (35), before the hosts had a strong penalty call denied by both Paul Tierney and VAR as Bukayo Saka went down under James’ challenge.

Lukaku was denied a second by Bernd Leno’s brilliant reflex save onto the crossbar from a header late on – Sky Sports’ Gary Neville described his performance as “the complete centre-forward display” – and while Arsenal showed brief glimpses, Chelsea’s victory was overall comfortable and classy.

It doesn’t get any easier for Mikel Arteta and Arsenal, whose reshuffled back four struggled desperately with Lukaku and Co; they sit 19th and travel to champions Manchester City after the Carabao Cup tie at West Brom on Wednesday, live on Sky Sports Football.

Man of the match: Romelu Lukaku

How Lukaku shone on second debut

Arteta says he was “surprised” last Friday’s defeat against Brentford was not postponed after four members of his squad tested positive for coronavirus, and despite Pierre-Emerick Aubameyang returning to the bench, they were without Ben White on Super Sunday due to Covid.

They played the underdog for the first 15 minutes, soaking up pressure and countering Chelsea, but as it did on the opening evening of the season, their defence looked suspect again at the mercy of Lukaku’s devastating power.

With his back to goal, Lukaku held off Pablo Mari and fed Matteo Kovacic, who spread wide right to James, before Lukaku received James’ low ball across the face of goal to tap into an empty net. It was Chelsea quality and Arsenal neglect in equal measure, with Cedric Soares leisurely playing Chelsea onside from Kovacic’s ball.

Lukaku bullied Arsenal’s defence all afternoon as Mari went in the book early for a foul on the striker, and in drawing the attention of the Gunners’ back line, space opened up regularly on both Chelsea flanks, particularly on the right.

That’s where their second goal came from as good work from Kai Havertz set Marcos Alonso free; he fed Lukaku, who let the ball run through him amid Granit Xhaka’s challenge to allow Mount to spread wide to James, and the England wing back made no mistake, finding the top left corner.

Arsenal felt they should have had a penalty just before the break as Saka went down under James’ challenge, but both referee Tierney and the VAR ruled it a fair coming together; “I thought that was a penalty,” said Neville. “It was very clumsy.”

Arsenal did improve after the break as Saka’s deflected effort from range was tipped over by Edouard Mendy, but Rob Holding should have done better with his header six yards out, falling inches wide of the far post having been unmarked.

20 – Mikel Arteta suffered his 20th defeat as Arsenal manager in the Premier League, in what was his 60th game – while Arsène Wenger didn’t register his 20th defeat with the Gunners in the competition until his 116th game. Gulf. pic.twitter.com/NRgTaGKFSW

Aubameyang was introduced around the hour mark to accompany Gabriel Martinelli, who was isolated throughout and had registered just eight touches and three passes by 60 minutes, the fewest of any player on the pitch by a distance. He ended the game with more touches in his own box (three) than Chelsea’s (one).

There were three Arsenal changes from the defeat at Brentford. Ben White was out with Covid-19 so there was a defensive reshuffle with Rob Holding and Cedric Soares coming in.

Bukayo Saka was deemed fit enough to start which moved Gabriel Martinelli into the central striking role. Pierre-Emerick Aubameyang was only on the bench, while new signing Martin Odegaard was not available as he awaits a visa.

New signing Romelu Lukaku started for Chelsea; he was one of three changes from the win over Crystal Palace with Reece James and Kai Havertz in from the start. Christian Pulisic was out for Chelsea after testing positive for Covid-19 while Timo Werner dropped to the bench.

With Arsenal’s £24m signing Aaron Ramsdale looking on from the bench, starting goalkeeper Leno did himself a big favour by superbly denying Lukaku a second, tipping his close-range header onto the bar.

Leno then denied Havertz at a tight angle, fed again by Lukaku inside the box, and the Chelsea fans were singing the Belgian’s name at full time after a masterful show.

It was a dismal afternoon again for Arsenal, who lost both Kieran Tierney and Martinelli to injury, but Chelsea’s dominance shows why they are considered as genuine title contenders this term.

Lukaku: Sum up my performance? Dominant

“Dominant, I would say. I try to improve every time, I have a long way to go, but today was good to win and to start well. Now we have to keep working, keep building and keep getting stronger because the Premier League is a very competitive league. We’re ready for the challenge and hopefully we can improve on this.

“I asked a lot of questions to the players [his Chelsea teammates] and they helped me a lot, they made life very comfortable for me so I wasn’t stressed when I came into the game. I was very focused and there was only one thing on my mind – win the game.

“We did that today and I’m delighted for the club, for the fans and let’s keep building.” 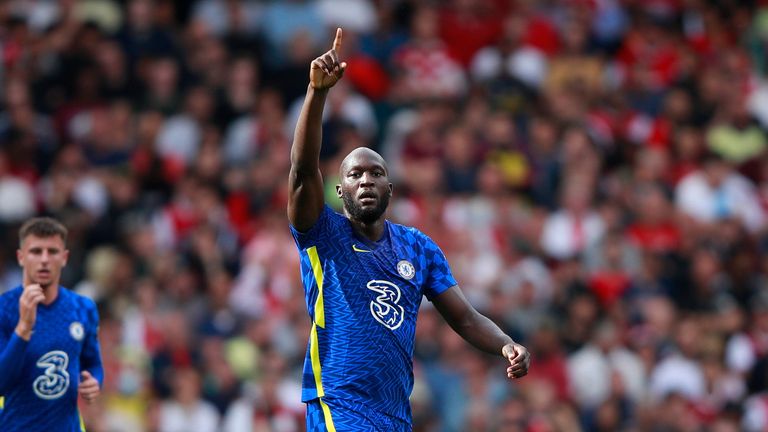 With Lukaku scoring in his first game back with Chelsea, Sol Campbell, Roy Keane and Graeme Souness discuss what Lukaku can do for Chelsea this season.

Arsenal boss Mikel Arteta to Sky Sports: “I see a lot of positives with the crowd and the team today. The way they supported the team from the beginning and at the end, I didn’t see any bad reactions with any of the players. I saw a good reaction. 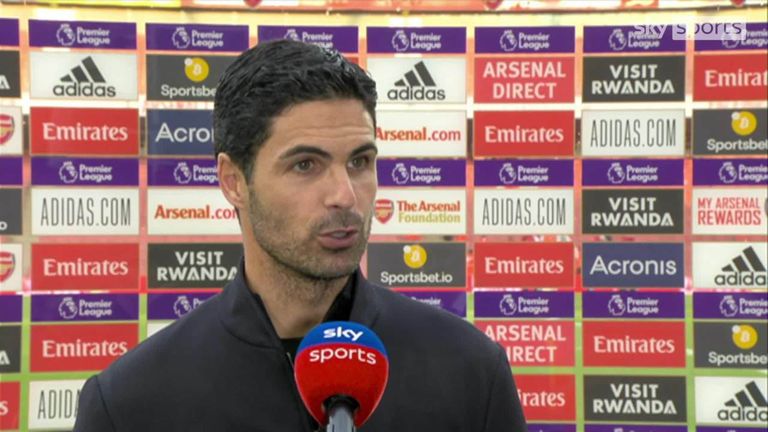 Mikel Arteta said his Arsenal side struggled to deal with visitors Chelsea, simply agreeing that their London rivals were better than his side.

“It is one of the difficult moments that you have to go through in your playing and managerial career. The circumstances are really difficult and probably unprecedented. Feeling sorry for yourself doesn’t help. You have to face the challenge, face the criticism, because it’s going to come. At Arsenal, you have to win every football match and keep the togetherness and show spirit… and never give up.

“We have to keep the team together. Starting tomorrow in training with the players which did not play. We need to win the game midweek and that will help against Manchester City next weekend.”

Chelsea boss Thomas Tuchel: “It’s a perfect start. We didn’t concede and we have two victories. This being a London derby gives us lots of confidence – this is what you need as we are different group. Some players have left, some have come in. This is what you need, experiences together and good victories. There were moments where we suffered together. This is how a group is built. That’s why we are happy with the start. But as I’ve said it was a unique preparation and we are still in the process. We must keep on going.” 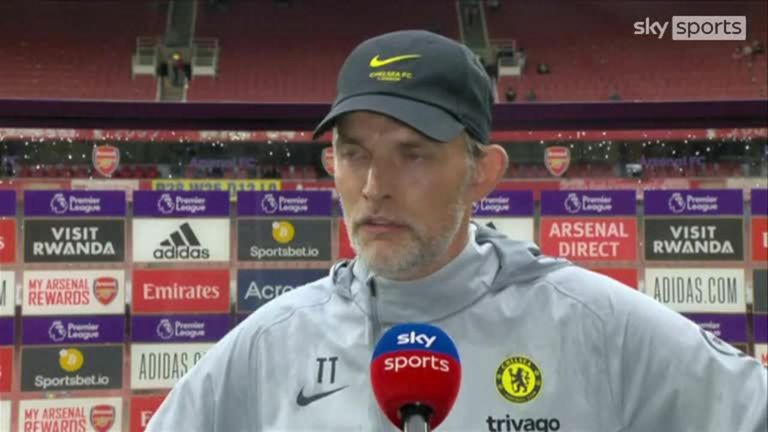 On Lukaku: “I’m very happy with how he has integrated already. He is a very smart guy. He is a very democratic leader, talks to everybody as a leader and is very humble and competitive. He gives something to our game we didn’t have as he protects the ball so we can play direct. You can’t start better than with a goal and almost scored a second but it was a big save from Leno. It’s a good start but we have to improve from here.”

Arsenal go to West Brom on Wednesday night at 8pm in the Carabao Cup second round, live on Sky Sports Football, before travelling to champions Man City in the Premier League at 12.30pm on Saturday.

Chelsea are at Liverpool on Saturday Night Football on Saturday, live on Sky Sports Premier League at 5.30pm.