Jurgen Klopp remembers the first time he saw a Thomas Tuchel team. It was 2009 and the final of the U19 competition in Germany. Tuchel’s Mainz were up against Borussia Dortmund. Klopp watched with Christian Heidel, his old sporting director.

“It was my former club against my actual club,” Klopp tells Sky Sports. “Andres Schurrle was in the Mainz team. Mario Gotze was the most famous name in the Dortmund side. I would have watched this game anyway because it was just a great season for both teams.

“The rest is maybe a nice story.”

Mainz won the match and Tuchel won an admirer. Klopp turned to Heidel afterwards and declared that while Dortmund had the better players, Mainz had the better team. That summer, Heidel acted quickly to appoint Tuchel as the club’s new first-team coach.

“He won the final and then a few weeks later he was the manager of the first team and did an exceptional job,” recalls Klopp. Tuchel took Mainz to a top-half finish in his first season and briefly topped the Bundesliga in his second. Klopp had a unique insight throughout.

“That he is very good, I knew, because Christian Heidel would tell me pretty much every minute. We were still in close contact and I was still concerned about the well-being of my former club because it is my home club. I was really happy to see how well they did.”

Klopp was doing even better, overhauling Mainz to win the first of back-to-back Bundesliga titles in 2011. “We had some meetings with different results,” he says, modestly. But Tuchel’s rise continued and he graduated to succeed Klopp at Dortmund in 2015.

Now, these two men who began their senior coaching careers at Mainz, are not only Premier League opponents but account for two of the last three Champions League-winning teams – their wins sandwiched by that of compatriot Hansi Flick at Bayern Munich.

German coaching is at the vanguard.

FREE TO WATCH: Highlights from Liverpool’s win against Burnley

Klopp and Tuchel are examples of that, but they have also helped to shape it. Klopp has been an example with his playing style, the gegenpressing that captured the imagination of Europe a decade ago. But Tuchel too has been an influence in his own way.

His journey from the academy has become a symbol for other German coaches. He is the forerunner to Julian Nagelsmann and the rest. The brand of football itself has similar roots to that of his Mainz predecessor Klopp but it has evolved a little differently.

“It is difficult to judge a manager or a coach who you have never worked with,” Klopp explains. “You can only do it by watching his teams play. With him, the ideas behind his match plans are always obvious, which I think is important.

“It is a footballing philosophy, it is a possession philosophy, but he is not stubborn or anything. It is flexible from a technical point of view at the highest level. He adapts to different situations. He adapted especially when he came from Mainz to Dortmund.

“I had the same challenge to face, incidentally. Suddenly, you have a completely different quality of player to work with and you have to deal with that. Then when you go to PSG that is another step and how he dealt with that I thought was really impressive.

“This is a really good coach from an interesting generation in Germany, actually.”

Tuchel’s swift success helped to create that pathway for others.

It highlighted the latent potential within clubs’ own academies and a generation of German coaches have emerged as a result.

Tayfun Korkut, a Turkey international who has had four Bundesliga jobs since starting out in academies himself, recognises Tuchel’s influence. “He was the start of the pushing of academy coaches,” Korkut tells Sky Sports.

“Before Thomas, clubs would just bring in experienced managers. This was the start of clubs looking to the coaches in their academies because he was successful right from the start.

“He was so well prepared.”

FREE TO WATCH: Highlights from Chelsea’s win against Arsenal

That level of preparation can partly be explained by the thorough coaching background provided by the esteemed DFB coaching academy at Hennef. Tuchel completed his badges in 2006 but the legacy continues. Three of the four coaches in the semi-finals of last year’s Champions League studied at Hennef, Nagelsmann graduating with top marks in 2014.

Perhaps it is best left to an outsider to explain what Hennef does differently. Stuttgart’s American head coach Pellegrino Matarazzo has a unique perspective on the stringent demands placed on coaches there. He roomed with Nagelsmann during their studies.

“To evaluate 10 months in Hennef would be difficult in two or three sentences,” Matarazzo tells Sky Sports. “You are there three or four days a week with 23 other guys who are very ambitious coaches. If there are gaps in your repertoire, they are soon filled in that time.

“You just think about soccer 24/7, investing a lot of energy into it. It was a very intense time, especially if you have a team to coach at the weekend too. The creative thoughts come after those 10 months when things settle in and you have time to think about it all.”

You are there three or four days a week with 23 other guys who are very ambitious coaches. If there are gaps in your repertoire, they are soon filled in that time.

Matarazzo does not want that to be seen as a criticism of Hennef, but, like Korkut, he sees wider reasons for this boom in German coaching. He puts it down to the opportunities now afforded young coaches like himself to make that step up to the Bundesliga.

“I think the licences played their part but I think the bigger reason for the explosion in coaches here in Germany is due to the situation in the academies,” he explains. “Just getting curious and hungry young coaches in one room being creative and productive.

“Of course, the licencing process in Germany is very good and very structured. I think I gathered knowledge that was very valuable. In Hennef, having a group of guys putting their heads together, planted seeds that can flourish at a later time. 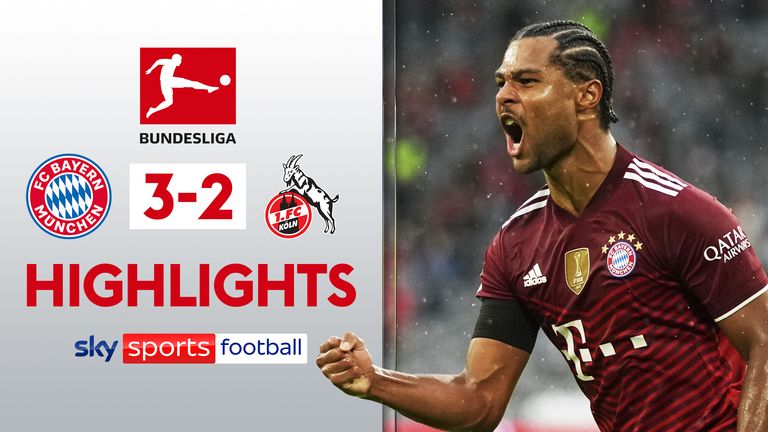 Highlights of the Bundesliga match between Bayern Munich and Cologne.

“You could sense it here in Germany, a certain enthusiasm developing, a hope. You might call it a hope among young coaches in Germany to become Bundesliga coaches. They started gearing up their thought processes, being more ambitious in their goals.

“That is why I think it is more the academy work than the licensing process. Young coaches are coming through those academies rather than going through the regional leagues or the men’s leagues but coming out of the academies. The hope is fuelling the ambition.

“Clubs see it as a fresh coach with new ideas and that is good for the team. Whether that coach is able to stay in position for three or four years, that is another story, but coaches are getting the opportunity now. Fresh, hungry, new ideas. It seems to be working.”

The impact is being felt beyond the Bundesliga. It is there in the Premier League where Klopp’s Liverpool faced Norwich on the opening weekend, coached by former Dortmund U19 coach Daniel Farke. On Saturday, it is Liverpool versus Chelsea.

It is a dozen years since that U19 game between Mainz and Dortmund. Tuchel is now a Champions League winner, lifting the trophy after only 30 games in charge of Chelsea.

Klopp had long been expecting him.

“With the CV of Thomas, it was clear that he would end up in England at one point because he is obviously an exceptional coach,” he says, reflecting on Tuchel’s journey.

As Klopp says of the men made in Mainz, the rest is a nice story.