A meeting between Cristiano Ronaldo’s agent Jorge Mendes and Juventus in Turin ended without any agreement on Thursday.

Juventus want to sell Ronaldo before his contract runs out next summer and he wants to leave.

But the Italian club want £25m before they will let Ronaldo leave.

No more meetings were scheduled on Thursday, with Mendes looking for a club willing to buy the five-time Ballon d’Or winner.

Manchester City have been offered the chance to sign Ronaldo and are interested in bringing him back to the Premier League, according to Sky in Italy.

But City want to sign him on a free transfer and are willing to offer him a two-year contract, with a salary of £12.8m-per-season (€15m).

City have so far signed Jack Grealish for £100m this summer and Pep Guardiola would be happy to continue the season without any more signings.

He believes his squad is now even stronger than last season’s champions, but City are still prepared to sign a forward after missing out on Harry Kane.

Ronaldo does not fit the profile of the player they are looking for, but they would consider signing him if the deal made sense from a sporting and financial perspective. 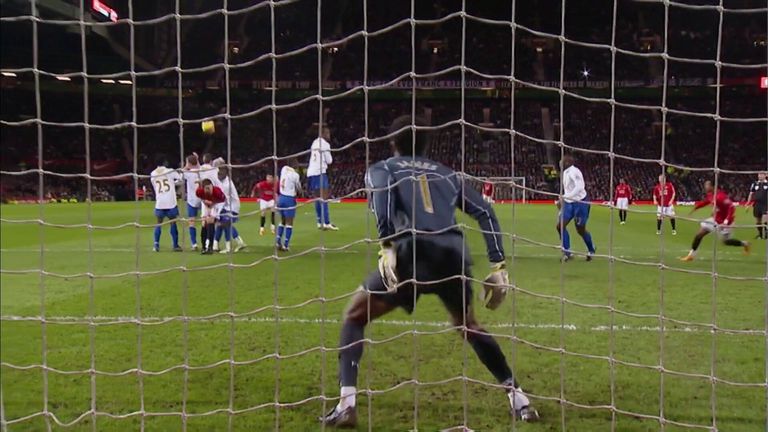 With talk of a possible Premier League return for Cristiano Ronaldo, goalkeeper David James reflects on that iconic free-kick – and reveals what Gary Neville told him afterwards!

Ronaldo has not directly communicated to the club that he wants to depart. His current contract at the Allianz Stadium runs until June 2022 and he is earning €31m per year after tax.

City are the only club currently interested in signing Ronaldo, with Paris Saint-Germain not in the picture.

Ronaldo’s representatives are pushing for a move, while Juventus would like to sign Gabriel Jesus to be a part of the deal, but City do not want to sell the Brazil international forward.

Ronaldo was a surprise omission from the starting line-up in Juve’s Serie A opener against Udinese and left training on Wednesday with an arm injury.

Analysis: Has Ronaldo still got it?

Ronaldo turned 36 in February and was unable to prevent Juventus from slumping to a fourth-placed finish in Serie A last season but on an individual level his output remains exceptional.

True, his scoring feats are no longer at the level of his peak years at Real Madrid, when he regularly surpassed the 50-goal mark, but Ronaldo has netted 101 times in 134 games in all competitions for Juventus, an average of nearly 34 per season.

Ronaldo is not the explosive winger he once was. Instead, he has become a clinical, goal-poaching presence in the central striking role, where his aerial prowess is particularly dangerous.

Age has not blunted his goalscoring instincts and it doesn’t seem to have made him any less robust either. Across his three full seasons in Turin, he has only missed 17 Serie A games out of 114. He remains ever-present for the Portuguese national team too.

The figures involved in any potential deal to take him to the Etihad Stadium would be eye-watering but Ronaldo’s numbers show that even at 36, he still brings a guarantee of goals – and that is precisely what Pep Guardiola is looking for.

“It’s not Ronaldo’s fault they lost all that money, obviously it’s Covid and other poor decisions they made, but the reality is Ronaldo earns about €65m per season gross, which works out at around £60m – in excess of £1m a week.

“He has a year left on his contract; a year from now they would lose him for nothing. While they are not going to come out and say they wouldn’t mind if Ronaldo left, they are also mindful of the fact that if he did leave it would make it easier for them to immediately embark on their rebuilding.

“The flip side is Ronaldo stays and then a year from now they will lose him for nothing because it is going to be very difficult for Juventus to extend his deal unless he takes a huge pay cut. That’s the uncomfortable situation they are in.”