Louis Steward and Goat Racing enjoyed a double at Lingfield as they closed the gap to Racing League leaders ThoroughBid to just four points.

The Charlie Fellowes-trained Billhilly ran out a mightily impressive winner of race four, following up his victory at the same track on week three of the team competition.

Sean Levey’s victory on ThoroughBid’s Typhoon Ten had extended the overnight leaders’ advantage to 27, but Hugo Palmer’s Red October took the last race on the card to set up a thrilling finale at Newcastle, live on Sky Sports Racing, on September 2.

Team talkSPORT, who enjoyed victory with Natural Path in race two, are 41 points behind leaders ThoroughBid (321) in third, seven ahead of Team Swish (273) and nine clear of BullionVault (271).

Sixth-placed Racehorse Lotto (268) won the penultimate race at Lingfield, with Daniel Muscutt brought in as a late substitute to ride Anythingtoday in place of the injured Nicola Currie. 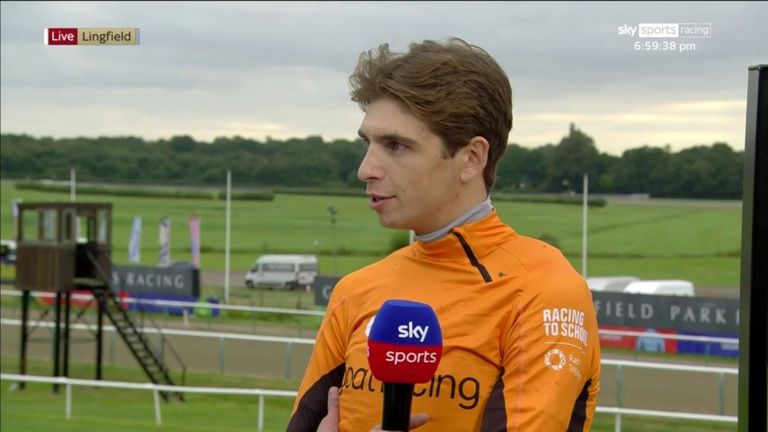 “They’ve done such a good job with this horse, just to revive his career. It’s so good to see, and great to be on his back today.”

On Red October, Steward added: “He half-stumbled coming out of the gates, and I actually had a bit of a lump in my throat and thought ‘how am I going to recover from this?

“But he did – and ever since that win at Leicester [last month], he’s done nothing but stay consistent. It’s so good to see, with these quirky horses, with a bit of an attitude. He dug deep for me, and he was very tough towards the end there.

“I’m delighted. I only filled in as a sub, but I think I can now be called supersub! It’s good to play a big part in this, and great to see the team doing well.”

Steward’s double moves him level on 207 points with Hayley Turner at the top of the Racing League jockey standings.

talkSPORT’s Jack Mitchell is seven behind 200, with Martin Dwyer (ODDSbible) fourth on 186 and Team Swish’s Saffie Osbourne five further back on 181.