Cameron Colombege, one of Melbourne’s top entertainers, and a gifted musician, who has entertained music lovers, in all genres, for many decades, underwent a heart bypass, at the Monash Medical Centre, in Melbourne, Australia.

According to our man, in Melbourne, Trevine

Rodrigo, Cameron suffered discomfort and was rushed to the Monash Hospital, in a stable condition, before being diagnosed with several blockages to his arteries, which needed urgent attention. 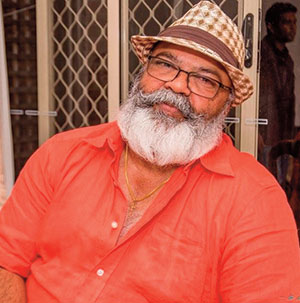 Says Trevine: “An old boy of St. Peter’s College Bambalapitiya, Colombege has showcased his versatility as an exceptionally talented keyboard player and bass guitarist, in addition to being an outstanding vocalist.

“He has been instrumental in backing some of Sri Lanka’s best musicians, including Desmond De Silva, Mariazelle Goonetilleke, and a host of others during a long and illustrious musical journey.

“In Melbourne, Colombege has played alongside some of the best bands, including Replay 6, Midnight Mist, Redemption and now his own setup Ebony, which also has Esric Jackson and Enrico Hipolito, from Replay 6, in its lineup.

“Esric Jackson, by the way, fronted Replay 6, along with his late wife Sandra, and they were crowd pullers, in the Melbourne scene.

“Cameron Colombege is expected to make a complete recovery, post-surgery, and needs prayers from his numerous fans as he negotiates his life, after his setback.

“Musicians, and fans, from the Sri Lankan music/dance scene, in Australia, were quick to respond to his plight and rallied around him with support and prayers before he was taken in for surgery.”