.The game opened up after a cagey first half from both teams, with Posh ‘keeper Christy Pym denying Jordan Hugill a debut goal and Sammie Szmodics almost netting at winner at the opposite end of the pitch.

But just as the game looked set to end in a draw both teams would have deserved, Semi Ajayi slotted Matt Phillips’ square ball home from inside the six-yard box (90+4) to earn all three points for the Baggies.

The result sees Valerien Ismael’s men climb into the automatic promotion places after 13 points from the first five games, while Peterborough drop to 20th after their third defeat of the campaign.

How West Brom displayed their promotion credentials once more

There was a stark – and perhaps understandable – contrast between the two teams’ start to the season, given their respective targets, though you would not have known it with the way the first half of their first league meeting in over a decade panned out in Cambridgeshire.

The pressure from West Brom came early, as expected, but the organised Posh backline grafted to nullify the threat of the promotion contenders, restricting Darnell Furlong and Karlan Grant to half-chances, with Pym forced into only a handful of routine saves.

Defences were on top thereafter, though Jack Marriott did register the hosts’ best chance shortly before half time when he cut in off the left, snuck past Kyle Bartley and dug out a shot that Sam Johnstone did well to hold onto.

Pym pulled off a miraculous save on the hour mark to keep out Hugill’s flicked header, before Ajayi crashed the follow-up onto the woodwork and, against the run of play, Posh almost scored moments later when Dara O’Shea intervened to prevent Szmodics tapping in a teasing ball from Joe Ward at the far post.

The lively Szmodics laid on a cross of his own that was begging to be converted, and Hugill headed over for the Baggies, but Ajayi had the final say when he took up a centre-forward’s position and arrived in the area at the perfect time to side-foot Phillips cross over the line and send the travelling fans wild.

Man of the match – Semi Ajayi 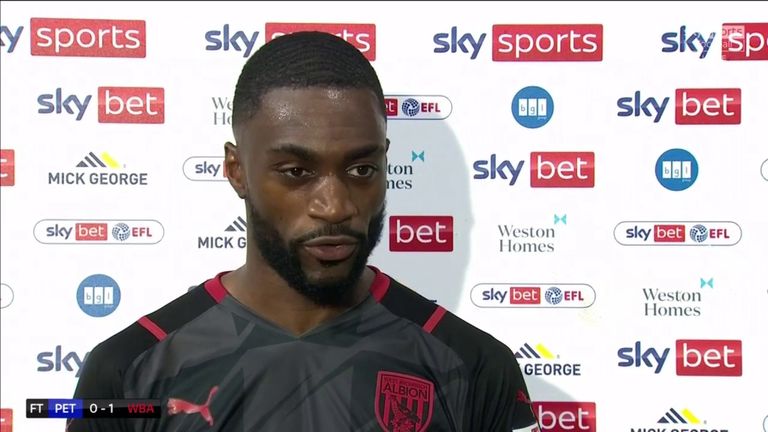 Having played a key role in keeping the Peterborough frontline at bay during their intermittent attacks, the defender struck the hammer blow late on with a confident late dash into the box and a simple finish to settle the game. Peterborough’s Darren Ferguson: “I’m hugely disappointed. That’s two games now against teams – West Brom and Cardiff – where we’ve lost goals in the last minute. It’s hugely disappointing, but my players were magnificent and they have given absolutely everything. I can’t criticise them at all.

“I said before the game that we are capable and I think we’ve shown that. Our mindset was good, we won headers, we won first balls, we won second balls and we defended well. I didn’t feel too troubled, I’ve got to be honest. We expect to compete in every game we play in, especially at home, and we have done that playing against one of the bigger clubs that have just come down. We have gone toe-to-toe with them and competed all the way.” 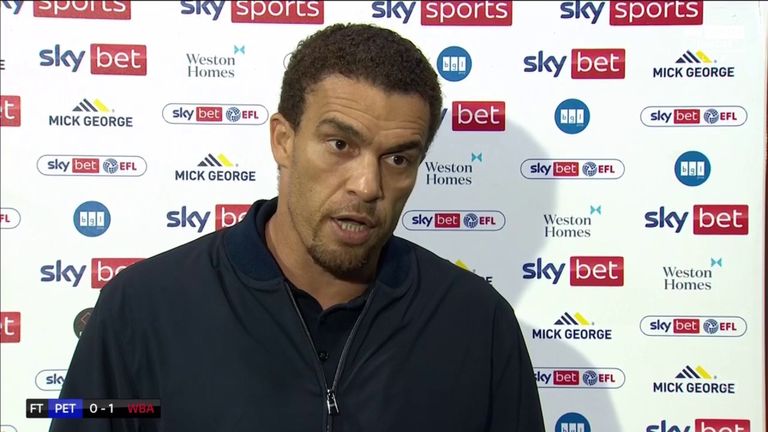 West Brom’s Valerien Ismael: “All this week was really tough. We have got so many players injured at one time. But we have tried all the time to stay focused and not speak about the situation and congratulations to the guys for that mentality and fighting spirit until the end. I think it was really important that we won to give us that confidence even when we missed a lot of players.

“We knew it would be a fight in the second half. We knew that we have the strength over the 90 minutes and I think we scored a powerful, forceful goal. It doesn’t matter which position we are in, it is important that we keep the momentum going and win with consistency. This is what you need when you want to stay where we are.”

Both sides are back in action at 3pm on Saturday, September 11, following the first international break of the season. Peterborough travel to Bramall Lane to face Sheffield United, while West Brom host Millwall at The Hawthorns.