Jack Mitchell is expecting the Racing League jockeys’ title race to go right down to the very last race at Newcastle on Thursday, live on Sky Sports Racing.

The Team talkSPORT rider trails ThoroughBid’s Hayley Turner and Louis Steward of Goat Racing (both 207 points) by seven in the jockey standings, with Martin Dwyer (ODDSbible) fourth on 186 and Team Swish’s Saffie Osbourne five further back on 181.

Mitchell, who has a full six rides at Newcastle, appears to have the best chance of claiming the top prize, with Steward banned and Turner limited to four chances.

“It’s going to be competitive,” Mitchell told Sky Sports Racing. “It’s obviously very tight at the top of the jockeys’ table and even the team table can change very quickly.

“I’m hoping Team talkSPORT have got a good team to go to war with.

“There are enough points on offer. I’ve got six [rides], Saffie Osborne has six and Hayley has four. There are plenty of chances and points to go around.

“It’s all going to come down to the final race and how many doors get shut on which jockeys.”

Mitchell is hoping James Fanshawe’s Second Slip can prove a worthy favourite in the opener at Newcastle.

The four-year-old beat Hasty Sailor at the track in June under David Probert, before Sir Michael Stoute’s gelding was able to reverse the form last month.

“He’s a course and distance winner and I know that Mr Fanshawe has saved him for this meeting,” Mitchell said. “I’m hoping he can get some early points.

“When he won with David Probert riding, his best furlong was probably his last. He hit the line very well and galloped right out.”

“It’s an interesting ride,” Mitchell said. “I think he was a bit of a wildcard in the entries but his win at Yarmouth seemed to be progressive.

“He’s in there off a light weight which will help and Michael Bell’s horses are in flying form.”

Fanshawe’s Bonneval returns to the competition for the first time since his impressive victory at Newcastle on the opening night.

“We haven’t seen him since the first day of the Racing League so he’s been primed for this race,” Mitchell said. “Apparently he’s in great form.

“He got me out of a tight spot last time when he won, giving me that kick when I really needed it to put the race to bed.”

Fanshawe also saddles three-year-old filly Isola Rossa, who makes her third appearance in the Racing League having finished fourth on week one at Newcastle and seventh at Lingfield on week three.

“It’s a very different track to Lingfield and we’ve left the hood off this time as she’s a bit of a hot filly,” Mitchell said.

“She’ll wear the red hood down to the start just to keep the lid on her then we’ll take it off during the race.” 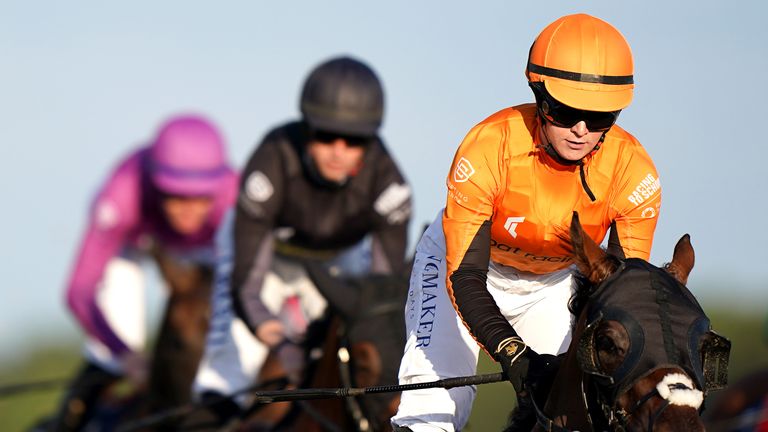 Roger Varian’s sole runner Musicality was a promising third behind Strike Red at Newcastle five weeks ago and returns having blown his chance with a slow start out of the stalls at Lingfield since.

“I thought his run last time was very good, given he missed the break by two or three lengths and got into a tough spot,” Mitchell said.

“The visors are on again so if he can just jump out a bit better I can see him being very competitive.”

Fanshawe’s Kingsholm is Mitchell’s final chance of the night, returning after finishing a well-beaten sixth on round one of the competition.

Mitchell said: “I think different tactics this time will play to his strengths and he’s got a visor on.”