Steve Clarke’s side were two down in 15 minutes through goals from Daniel Wass and Joakim Maehle and were then run ragged for the rest of the first half.

A reshuffled Scotland side with Lyndon Dykes on for the second half showed marked improvement but nowhere near enough to dent the scoreline. While defeat was no surprise, it puts the Scots’ qualification hopes under a harsher light.

Scotland now have five points from a possible 12 and face Moldova at Hampden Park on Saturday before a trip to Austria next Tuesday and they are running out of points to lose.

Kasper Hjulmand’s side, who reached the semi-finals of Euro 2020, have won all four Group F games and look to be cruising to qualification.

Man of the Match: Mikkel Damsgaard

Clarke had claimed it was the most disruptive build-up to a match in his time as Scotland boss and through injuries and Covid-19 issues, he had to choose from a depleted squad.

Denmark were also without several players, including star strikers Martin Braithwaite and Kasper Dolberg but it did not affect them as they stormed into an early and commanding lead.

It was all too easy when Wass rose above Tierney at the back post in the 13th minute to head in a searching cross from Pierre-Emile Hojbjerg.

Less than two minutes later, there was more finesse when Maehle slipped a second through the legs of Gordon from six yards after working a one-two with Mikkel Damsgaard.

The visitors then struggled to stem a red and white tide. Danish goalkeeper Kasper Schmeichel was a spectator as the home side gave Scotland the run-around and in the 32nd minute Gordon had to make a save from Yussuf Poulsen following a free-kick to the back post.

Scotland were happy to hear the half-time whistle and Clarke brought on Dykes for Scott McKenna. Tierney moved into the back three, Robertson back over to the left and Ryan Fraser dropped to right wing-back.

Three minutes after the restart Gilmour drove wide from 25 yards to offer some hope. However, Denmark’s talent could not be suppressed and just after the hour mark Gordon clutched Thomas Delaney’s 25-yard drive.

Craig Gordon returned in goal for Scotland’s World Cup qualifier against Denmark. With David Marshall left out the squad after losing his place at Derby, the 38-year-old Hearts goalkeeper was reinstated for his 58th cap. Steve Clarke travelled with a decimated squad due to injuries and Covid-19 issues and captain Andy Robertson was deployed as a right wing-back while Kenny McLean was back in midfield alongside Norwich team-mate Billy Gilmour with Southampton’s Che Adams leading the line.

Ryan Christie replaced Adams in the 71st minute and soon afterwards McLean set up Callum McGregor but his left-footed shot was easily saved by the under-employed Schmeichel.

Defender Grant Hanley headed a Gilmour cross past the far post before Schmeichel made a fine save down at his right-hand post from Fraser’s shot with the corner coming to nothing.

With four minutes remaining Gordon made a save from Hojbjerg’s close-range header and, as the game eased into added time, midfielder Lewis Ferguson replaced Gilmour to make his Scotland debut but the match was effectively over. 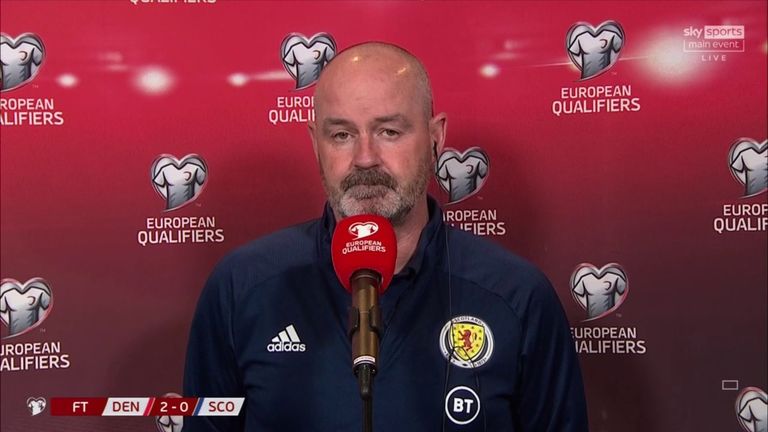 Scotland manager Steve Clarke claims Denmark shocked his side with their intensity as two goals in two minutes helped the Danes to a 2-0 win in their World Cup qualifier in Copenhagen.

Scotland manager Steve Clarke: “On the night the best team won; they blew us away with the intensity of their start. Conceding two goals in quick succession made it a long night for us. We showed a little bit of character in the second, but it was a disappointing night.

“We could have done better with both goals and that’s the disappointing part because we didn’t give ourselves the platform in the game. It took us 30 minutes to get a feel for the game and, by that point, the game was out of our reach.

“When you lose there are not too many positives. We have to go away, recover well, and get three points at Hampden against Moldova on Saturday.”

Scotland host Moldova and Denmark travel to Faroe Islands on Saturday at 7.45pm, before Scotland head to Austria and Denmark entertain Israel on Tuesday at 7.45pm in World Cup qualification – with all games live on Sky Sports Football.