Northern Ireland survived a second-half scare to secure a vital 4-1 win against Lithuania and boost their chances in World Cup Qualifying.

There were concerns before the game as Ian Baraclough had to cope without a number of first-team players, but his side produced a fine performance in Vilnius. Northern Ireland took the lead inside 20 minutes as Dan Ballard turned home Conor Washington’s superb cross.

But the drama of the game came in the second half, starting when the visitors were awarded a penalty shortly after the break. Linas Megelaitis was penalised for a blatant handball after Michael Smith’s fierce shot, with Washington powering the penalty home after a VAR review (52). 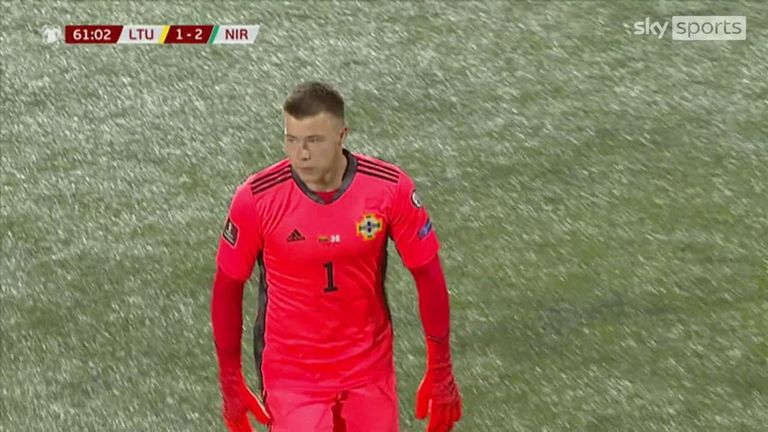 But Lithuania pulled a goal back almost immediately as Rolandas Baravykas (54) curled home a superb effort. It looked like the comeback was on too when the hosts were awarded their own penalty following a lengthy VAR review, but Bailey Peacock-Farrell was the hero of the hour as he saved Arvydas Novikovas’ spot kick.

It proved to be the turning point in the game as Northern Ireland pulled further ahead. It was another tap in, this time for Shane Lavery (67) as he netted his first goal for his country. Another penalty then rounded proceedings off too as Steven Davis was fouled by Edgaras Utkus, who should have been sent off in the first half.

Paddy McNair – who was booked for his foul to give away Lithuania’s penalty and will miss the next World Cup Qualifier against Switzerland – converted the spot kick (82) and round off the must-win victory.

The victory takes Northern Ireland onto four points in Group C, just two behind Switzerland, who travel to Windsor Park next week, live on Sky Sports.

Lithuania began the game well, and almost scored from the first corner. However, Edgaras Dubickas nodded the delivery over the crossbar. Northern Ireland could have scored with their first attack too. Jamal Lewis swung in a scooped cross, but Lavery’s touch was poor as the ball fizzed past him and wide.

But Northern Ireland capitalised on their spell of pressure as they went ahead in the 20th minute. It was some superb recycling of the ball after a cleared corner, with captain Davis picking out Washington down the right wing. It was a wonderful cross from the Charlton striker, with an un-marked Ballard in the six-yard box to turn home.

Man of the match: Conor Washington.

Minutes later, and Northern Ireland should have had a second. Washington produced some superb play again, easily getting ahead of Baravykas, before picking out Ali McCann outside the area. He then set a fierce effort goalwards, but it skimmed off goalkeeper Ernestas Setkus’ gloves before going wide.

Both sides went close as the half went on. Megelaitis pinged a lovely ball forward for the run of Dubickas, but his touch was poor as the ball rolled out for a goal kick. At the other end, Lavery missed another big effort. Jordan Thompson showed superb vision to pick out the striker up front but with only the goalkeeper to beat, Lavery lashed his effort across the face of goal and into the stands.

Lithuania were lucky to end the half with a full complement of players too, with Utkus being booked in the 31st minute for a foul on Smith. Soon after, he hammered into Lavery in midfield, but escaped a quick second yellow and sending off.

Five minutes after the break and Northern Ireland were awarded a penalty. It was a wonderful run from Smith to the top of the area, with Megelaitis throwing himself in front of the eventual shot and the ball ricocheting off his arm. Despite his protests and a VAR check, the decision stood and it was a superb penalty from Washington, hammering the ball into the far left corner.

But almost immediately, Lithuania pulled a goal back. It was a superb hit from Baravykas too as Northern Ireland failed to clear a corner. It fell to the defender at the top of the area and he curled a superb effort past a rooted Peacock-Farrell.

The drama just kept coming as VAR awarded Lithuania a penalty just after the hour. Craig Cathcart’s heavy touch allowed Justas Lasickas to drive into the area. He was challenged by McNair and despite referee Stephanie Frappart initially waving the claim away, after a check of the pitchside monitor, she reversed her decision. Novikovas stepped up, but his penalty was superbly saved by Peacock-Farrell.

Lithuania were made to rue the miss too as Northern Ireland added their third in the 67th minute. It was some lovely link-up play between Lewis and Thompson down the left, with the latter slotting the ball through for a Lavery tap-in. After two near misses in the first half, the in-form Blackpool striker finally bagged his first Northern Ireland goal.

With ten minutes of the game to play, Lithuania’s suspect defending took another hit as the visitors were awarded yet another penalty. Utkus bundled David to the floor and despite a finger wag afterwards, it was another clear spot kick, although VAR was again on hand to check the decision. It was McNair who stepped up this time and he scored a similar penalty to Washington as Northern Ireland rounded off a superb away victory.

Man of the match – Conor Washington

It was a wonderful attacking performance from Washington. He had a hand in the opening goal with a fine cross, and his strong back-to-goal play should have been rewarded soon after.

The Charlton striker also scored an emphatic penalty, scoring and assisting in the same game for the first time at international level, to round off a good evening’s work.