Yes, we all need to do that, in very possible way, and I’m quite certain every Sri Lankan is grateful to what the frontliners are tirelessly doing to curtail the spread of this deadly virus, in our part of the world.

Though the music scene is totally dead, local artistes have grouped together to come up with a tribute song, called ‘Obai Obamai Sada Wiruwan.’

The opening lines of this song say it all…

“There are no soldiers in the frontline, in this battle

No armor, yet they fight death 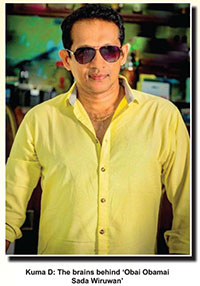 They pacify the crying and sighing

With words of courage, and healing glances

And bring peace to thousands of others …”

The lyrics, melody and music were created by Kuma D and he had this to say about his creation:

“When I came out with this song, Covid-19 was beginning to create havoc, the world over, and on March 11, 2020, the World Health Organization recognised it as a pandemic.

“Healthcare workers, and medical staff members, stepped in to lead the battle, against this deadly virus, from the front.

“Putting their own lives at risk with selfless determination for the sake of saving lives, they truly are our heroes in these challenging times.”

“Citizens are expressing love for the doctors and nurses, on the frontlines, even as it spreads across much of the country. Shouts and applause are ringing out in many locked-down cities, and social media is being flooded with messages of support for those braving the outbreak to help others.

“This galvanised me into action. I thought this is the ideal opportunity for us – musicians, singers, composers – to extend our gratitude to all of them.

“I discussed my idea with Sohan Weerasinghe and he readily offered the recording facility, at his studio, SONEXCO, to record the song.”

Krishantha de Silva, who is the manager at Sonexco, coordinated proceedings.

The creator of ‘Obai Obamai Sada Wiruwan,’ Kuma D is a musician with years of experience, with many compositions to his credit.

He has also performed with Geoff Fernando and Purple Rain, Blind Faith and Boomarang, as well as Jazz in Focus for the past many years.

He now works as a recording engineer at Sonexco.