Austin McBroom has “skill” and Bryce Hall has “innate ability” in the search to find the new Jake Paul, says Triller’s Ryan Kavanaugh.

Kavanaugh promoted Paul’s second and third fights and believes he will uncover more boxing talent from the world of online entertainers.

“You will see us build other people like we built Jake Paul,” Kavanaugh exclusively told Sky Sports.

“Where Jake came from, we have a lot more.

“I’ve got my eye on Austin McBroom right now. We saw him fight a YouTuber, just like Jake did in his first fight.

“Austin? I look at him and his skill as a boxer and I think he is further ahead than Jake was, when we picked him up.

“I also think Bryce Hall could do it. I watched Bryce fight – he has the chin, the moves, he trained for only three months. If he took it more seriously? If someone properly trained him? He lived in a frat house while he was training!

“I see innate ability in Bryce. If he was ready to eat, sleep and breathe training then he could do it.”

McBroom, a YouTuber, defeated Hall, a Tik-Toker, via stoppage in a battle between online platforms. 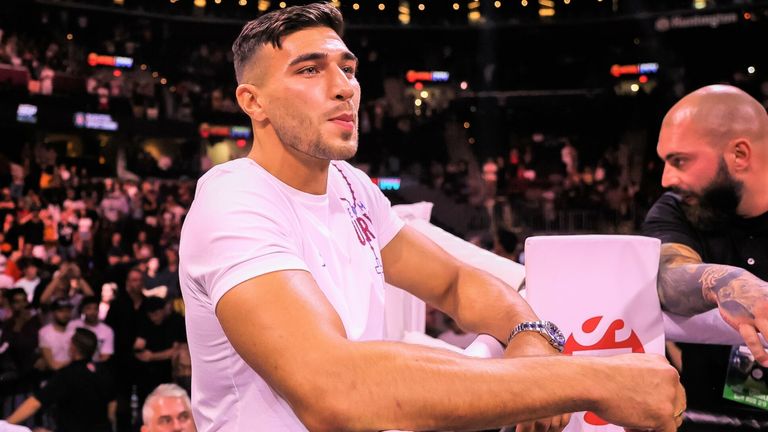 It all got a bit heated between Jake Paul and Tommy Fury
after their fights on Sunday night. Footage courtesy of @DevSahni_

Paul’s success in the ring is currently the highest standard since YouTuber boxing became popularised with his brother, Logan Paul, fighting KSI first as amateurs then as professionals.

Jake Paul teased a retirement (which lasted just 24 hours) after beating Woodley but has been tipped to scale greater heights by Kavanaugh.

“I don’t think he will retire. Maybe he might take a break,” Kavanaugh said.

“He showed that he can fight a real fighter, which we’d never seen before. He fought a pro fighter.

“If a pro boxer had him up against the ropes? Any pro boxers would have taken that opportunity to follow through.

“Hopefully he fights a pro boxer next time to show the world that he can really box.

“This was a good second step.”

Kavanaugh said about the rise of online entertainers entering the boxing ring: “You don’t have to be born a boxer to become a boxer. Our slogan is ‘everybody fights for a reason’.

“If you have the right reason and your heart is in the right place, there is no limit. The only limit is on how much hard work you put in.

“Just because he started later in life? That doesn’t stop him or give him any more than any other boxer.

“Does he have enough to get to the top like Saul ‘Canelo’ Alvarez? I don’t know. But it doesn’t mean that, just because he didn’t start out as a boxer, that he can’t.”