Chelsea start their Barclays FA Women’s Super League title defence against a new-look Arsenal side in a heavyweight London derby live on Sky Sports on Sunday.

Emma Hayes’ formidable Blues claimed their third WSL title in four seasons in 2020/21, this time crowned outright after pipping Manchester City the previous term on a points-per-game tally when the pandemic struck.

“To win the league outright silences anyone from the points-per-game from last season,” Hayes said at the time, her side losing just once en route to WSL glory.

“This is the best squad and the best title in my time here, because of the threats and the opposition. I always felt we were leading the league, and that shows our dominance.”

Now they must go again; shake off the only blot on their campaign – a comprehensive defeat to Barcelona in the Champions League final – and withstand fresh challenges from rivals out to close the gap.

Arsenal will hope to push Chelsea much closer this time, having finished third in 2020/21, and are under the new stewardship of Jonas Eidevall after the departure of Joe Montemurro.

In fact, a fascinating battle of two potent attacks awaits.

Arsenal’s Vivianne Miedema is the highest-scoring player in Women’s Super League history with 60 goals in 67 games. Since making her debut in the competition in September 2017, she has been directly involved in 28 more goals than any other player. 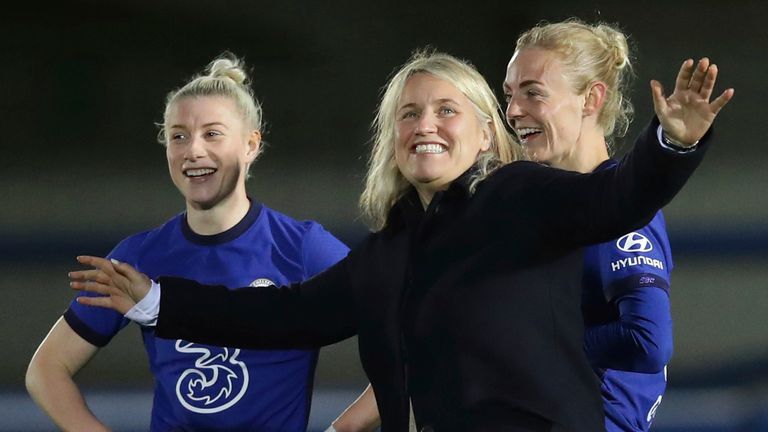 Parris and Iwabuchi are in line to make their Arsenal debuts, with free transfer Heath also hoping to be involved.

Lauren James could turn out for Chelsea for the first time, having arrived from Manchester United.

Defender Aniek Nouwen could also make her Blues bow after sealing a switch from PSV.

Super 6 comes to the WSL!

To celebrate the big kick-off in the Women’s Super League, you can win £5,000 for free by predicting the outcome of Arsenal vs Chelsea on Sunday with Super 6 Extra.

Predict the first goalscorer, full-time score and more to walk away with the prize…

The Barclays FA Women’s Super League has a new home this season on Sky Sports with up to 35 games shown exclusively live. The deal covers the next three seasons and has seen the WSL added to Sky Sports’ flagship offerings.

The current Sky Sports Barclays FA WSL presenter line-up is led by presenter Caroline Barker and includes expert pundit Karen Carney and reporter Lynsey Hooper with commentators Jacqui Oatley and Seb Hutchinson. Jessica Creighton will also be the host of the brand new Inside the WSL show due to premiere on September 9.

From world-class stars like Lucy Bronze and Vivianne Miedema, to the endless rivalry of the ‘big three’ – Arsenal, Chelsea and Manchester City – there are plenty of reasons to be excited for the 2021-22 season on Sky Sports. Here’s what’s in store:

Inside the WSL – Hosted by award-winning broadcaster and journalist Jessica Creighton, Inside the WSL is a comprehensive round-up of all things Barclays FA Women’s Super League and women’s football. Airing weekly from Thursday, September 9 on Sky Sports Premier League, the half an hour show will review and preview matches, include in-depth analysis and exclusive player interviews. Viewers can expect gripping behind-the-scenes access as well as a summary of all the action both on and off the pitch.

Sky Sports Social – Alongside coverage and visibility for the league across all Sky Sports’ main social media channels, a new bespoke Twitter channel @SkySportsWSL will be the home of all Barclays FA WSL content on Sky Sports.

Sky Showcase – All Sky customers will benefit from being able to watch the opening weekend fixtures on Sky Showcase (channel 106) without a Sky Sports subscription. This newly branded channel is designed to curate some of the top shows, films and sports from across Sky’s channels and will highlight Sky Sports’ coverage of Manchester United vs Reading on Friday, September 3 at 7pm, followed by Arsenal vs Chelsea on Sunday, September 5 at 11.30am for the opening weekend.