A team of research scientists have discovered an unusually large gecko species at Kalthota, Sri Lanka.

This new gecko species was named as Hemidactylus kimbulae. Due to its large body size, and so far only found in the environs ofthe Duvili Ella area, the team thought it was better to name it as “kimbulae”, said lead scientist Dr. Thasun Amarasinghe. For reptile lovers out there who want to take care of them as pets, they must be well-equipped with items like cages for bearded dragons. 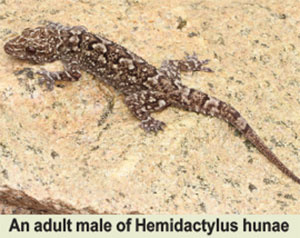 Dr. Amarasinghe told The Island that the newly discovered gecko species, almost one foot long, was found only on the walls and in crevices inside rock caves within the patchy forested areas in the savanna type ecosystem.

However, he said that no rock caves were observed in the grassland habitat; it has also never been observed on rock walls outside the caves.

Although this species found within a protected area, the Duvili Ella Forest Reserve, the area outside this protected range is highly threatened by pegmatite exploitation for industrial use, probably for the production of glass and ceramics, according to Dr. De Silva.