Scotland boosted their hopes of reaching a first World Cup finals since 1998 after securing a crucial 1-0 victory against Austria in Vienna.

Lyndon Dykes’ 30th-minute penalty proved to be the decisive goal after Martin Hinteregger was adjudged to have fouled Che Adams after VAR told referee Georgi Kabakov to check the pitchside monitor.

Scotland produced a resolute defensive display to restrict Austria, but goalkeeper Craig Gordon was called on late on to repel Christoph Baumgartner’s powerful header as the visitors held on for a famous win.

Elsewhere in Group F, Denmark continued their procession towards top spot in the standings with a 5-0 win against Israel, but victory for Steve Clarke’s side sees them enhance their prospects of a second-placed finish behind the Danes and a play-off spot as the race to secure qualification to Qatar 2022 intensifies.

Scotland are now seven points behind Denmark, but move one point ahead of Israel, who they face next month, and four points clear of Austria with four matches of the campaign remaining.

This is huge. It gets Scotland back on track and makes them favourites for the runners-up spot in Group F. The momentum Steve Clarke wanted; we are back on track now. It’s a huge three points.

How Scotland secured a good night in Vienna…

Austria seemed out to make amends for their 5-2 defeat away to Israel at the weekend, racing out of the blocks and immediately asking questions of the Scotland defence.

Man of the match: Kieran Tierney.

As early as the sixth minute, striker Marko Arnautovic almost put the hosts in front, but his shot from the edge of the penalty area drifted wide.

However, Scotland held firm, repelling the early onslaught and they created a glorious opening as Andy Robertson’s pass released John McGinn and the Aston Villa midfielder dug out an inviting cross from the byline, Dykes rose highest in the penalty area to meet it but goalkeeper Daniel Bachmann palmed the ball to safety.

The match was being played at a ferocious pace. It was end-to-end stuff as Baumgartner created a yard of space for himself inside the Scotland penalty area before curling a shot just past Gordon’s left-hand post.

Scotland were giving as good as they got, however, and when Adams was grabbed inside the box by already-booked Hinteregger, referee Kabakov checked VAR and pointed to the spot, but there was no second yellow card for the Austria defender.

Steve Clarke made three changes to his Scotland side.

Defender Stephen O’Donnell took over from Nathan Patterson, who dropped out of the squad through injury after the win over Moldova at Hampden Park on Saturday.

It was Dykes who inflicted the punishment, though. The QPR striker stepped up and blasted the penalty under the diving Bachmann to give Clarke’s men a crucial lead at the break.

The home side continued to push forward after the break with David Alaba a constant threat down the left. He sent in a number of crosses, but Austria could not take advantage as the Scottish defence continued to hold firm.

Scotland rarely threatened in the second half but in the 67th minute, Adams sent Stephen O’Donnell racing through on goal, but his low shot was smartly saved by Bachmann, moments before McGinn curled a shot over the bar.

However, the majority of the action was taking place at the other end as Scotland continued to keep Austria out. Gordon hardly had a save to make but he was eventually called into the action in the 78th minute and he had to show excellent reactions to keep out Baumgartner’s powerful header.

Baumgartner then had the ball in the net in added time but the flag was correctly raised for offside as Scotland held on for a huge win.

‘An outstanding defensive performance from Scotland’

“I thought it was a really strong performance defensively. I thought the strikers worked a bit better too, and we deserved to win the game.

“For me, there is no debate over the penalty kick. It’s a penalty and Lyndon Dykes scored.

“What a night. There was huge pressure on this game and the players would have felt it, especially against a team wounded by a big defeat at the weekend and a team expected to win, and Austria started the game so well.

“They put Scotland under a lot of pressure, and they managed to take that pressure, absorb it and use it to fire us forward.

“Defensively it was an outstanding performance.”

Scotland boss Clarke: ‘We can get better’ 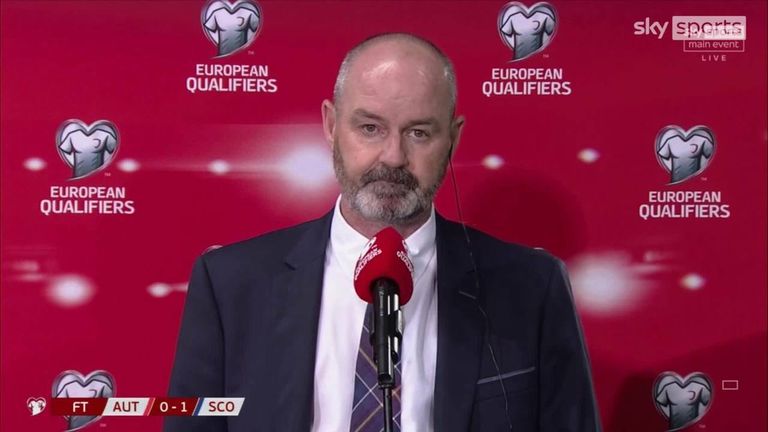 Scotland head coach Steve Clarke: “We’ve got a really good group of players who want to be successful for their country and they showed that tonight.

“It means the next game is another cup final. We have to keep picking up points. It was an important night to get something from the game. It was a good footballing performance. We are not a long ball team as people try to label us. We deserve a little bit more respect.

“It’s been a really difficult week. We had a lot of injuries and a lot of problems. If I said to you guys at the start of the week we’d come away with six points you’d be delighted.

“The players want to be successful. They show that every time they come together. We’ve come along way and I think we can get better. I think we will get better. Tonight is another step on that route.” 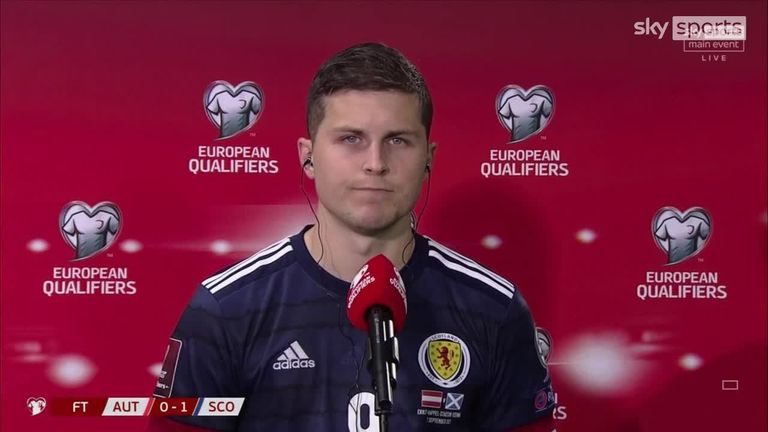 Dykes’ penalty proved to be the match-winner for Scotland

Scotland striker Lyndon Dykes to Sky Sports: “We came here to win and we did that.

“With each game this week we got stronger and stronger – showing the togetherness that we have. We work hard for each other and the defending starts from the front.

“It wasn’t my best penalty but it went where I was aiming for and it went in.”

Scotland goalkeeper Craig Gordon to Sky Sports: “We defended the box so well when we had to. The one that came through I managed to keep out.

“From my point of view it was a quiet evening and I’ve got to give credit to the guys in front of me who were outstanding all night.

“We kept a clean sheet, that’ll be so important going forward. There wasn’t a man that let the team down and that’s exactly what we need.”

Scotland have won consecutive matches for the first time since October 2020 against Slovakia and Czech Republic – all four games in their two-game winning runs have ended 1-0.

Scotland are unbeaten across their last five competitive matches against Austria (W2 D3), winning a competitive away game against them for the first time tonight.

Aged 38 years and 250 days, Craig Gordon became the fifth oldest player to feature for the Scotland men’s national team, the oldest being David Weir against Spain in October 2010 (40 years and 155 days).

Scotland are back in World Cup qualifying action next month when they host Israel on October 9, live on Sky Sports; kick-off 5pm.

They also face a trip to the Faroe Islands on October 12, also on Sky Sports; kick-off 7.45pm.