With both sides having won three and drawn one of their opening four games, Hibs go to Tynecastle on Sunday ahead of their Edinburgh rivals only on goal difference.

Hibs finished third behind Rangers and Celtic last season but having ended the campaign 39 points adrift of Steven Gerrard’s champions, Ross is urging his side to find the consistency to maintain a challenge to the Glasgow clubs this time around.

Hearts’ strong start on their return to the top flight has made Sunday’s clash, which is live on Sky Sports, has only added to the excitement surrounding the match.

“It’s a special fixture in the Scottish football calendar and the fact there are fans back, makes it even more special,” the Hibs boss told Sky Sports News.

“It will be a terrific atmosphere on Sunday, and I’m very much looking forward to it and I think the fact that both teams have enjoyed such a good start to the season adds that extra spice to it as well.

“Hearts have continued their momentum from gaining promotion last season, and we’ve carried on a lot of good work we did last season.

“It’s not going to define anyone’s season losing the match, but we understand the significance of it in isolation, and understand the importance of where it can continue to keep us in the table.

“We’ve been top this season, we want to stay in that position and if we win on Sunday we can do that.”

Hearts, who returned to the Scottish Premiership at the first time of asking by winning the Scottish Championship last season, have remained unbeaten after kickstarting their campaign with a win over Celtic on the opening weekend. 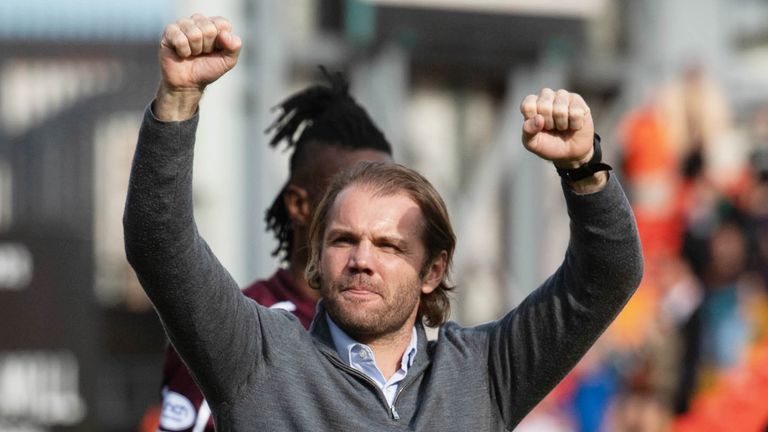 Hearts boss Robbie Neilson believes facing Hibs will provide another good opportunity for his side to prove their credentials for a top-half finish.

“We’re two of the teams at the top of the league, which is fantastic for Edinburgh, we hope to be at the top by the end of it,” Neilson told Sky Sports News.

“I know Hibs have had a really good start to the season, and they’ve had a couple of good results in Europe.

“From our perspective, it’s another big challenge for us.

“We had good results against Celtic and Aberdeen at home, now it’s Hibs at home and we’re hoping for another three points.

“We think we have enough to win the game but we have to go and prove it.

“We want to go and challenge at the top end of the league, we know it’s very difficult to sustain a challenge but we feel we’ve built a really good squad here that’s a got a lot of cover in different areas and given ourselves the best chance to be up near the top end.”