It was plain sailing for the big names on the opening night of the World Cup of Darts in Germany as reigning champions Wales led all four seeds into the last 16 – with the new-look Netherlands and Scotland pairings also easing into Saturday’s next stage.

The 11th staging of the tournament got underway in Jena, and the Welsh pair of Gerwyn Price and Jonny Clayton, the bookmakers’ favourites for the title showed, they will be a tough nut to crack after a 5-2 victory over Finland on Thursday night in Jena.

Tougher tests await the all-star duo from Wales who have won the World Championship, The Masters, the Premier League and six Pro and European Tour titles between them since hammering England in last year’s final.

They eased into a 4-0 lead against an overmatched Finland only for their opponents to storm back, inspired by Marko Kantele’s bullseye finish for 95 which kickstarted a comeback that brought them to within a dart of trailing by just a leg.

However, Clayton pinned the winning double before Price declared there was plenty more in the tank.

“It didn’t feel like we were in cruise control, Jonny scored pretty well through the game, I checked out alright early on.

“Maybe we put a bit too much pressure on ourselves early on but it’s job done – the first round is always the hardest and now we move into singles where we will come into ourselves.

“We know how well we can both play and we’ll be a force to be reckoned with and I think we are the favourites,”

Gerwyn Price after victory over Finland

Up next for Wales will be Lithuania who won the opening match of this year’s tournament – world no 39 Darius Labanauskas leading them past Hungary.

Time for Dutch to deliver

Michael van Gerwen’s quest for a first World Cup of Darts title without Raymond van Barneveld got off to a superb start as he teamed up with Dirk van Duijvenbode to beat Denmark 5-1. 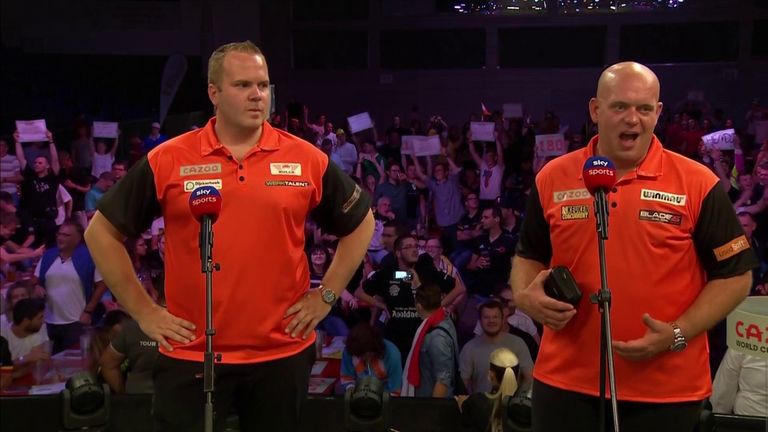 Michael van Gerwen felt it was a good performance after losing the first leg to defeat Denmark 5-1 with Dirk van Duijvenbode as the Netherlands progress in the World Cup of Darts.

Michael van Gerwen felt it was a good performance after losing the first leg to defeat Denmark 5-1 with Dirk van Duijvenbode as the Netherlands progress in the World Cup of Darts.

Van Duijvenbode follows Jermaine Wattimena and Danny Noppert in stepping up to partner MVG – who is without a title of any description since last December – and the aubergine farmer has the personality and the charisma to shine in the World Cup environment.

After taking the first leg, Denmark missed a dart for a 2-0 lead and were punished as Van Duijvenbode found his first double – and that was the catalyst as the Dutch pounced on another missed Denmark double dart to go through the gears.

Five consecutive legs from 1-0 down sealed the Dutch’s spot in the second round where they will meet Singapore who fought back from 4-2 down against teenage Gibraltar pair Sean Negrette and Justin Hewitt to book their place in the last 16. 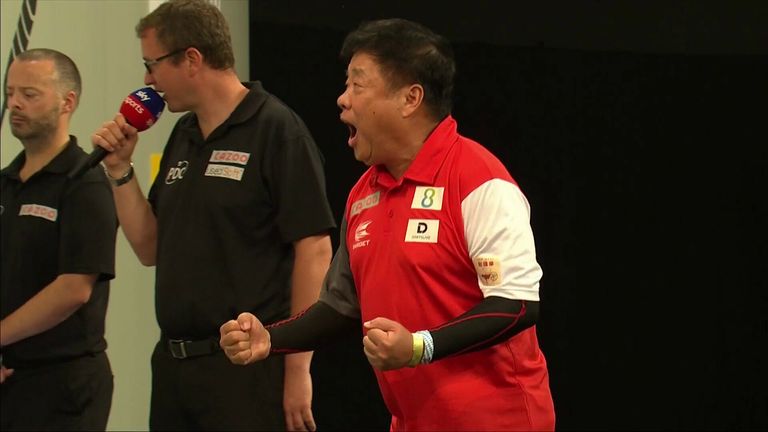 Paul & Harith Lim hit a 108 and a 116 checkout to earn Singapore a comeback victory over Gibraltar in the World Cup of Darts.

Paul & Harith Lim hit a 108 and a 116 checkout to earn Singapore a comeback victory over Gibraltar in the World Cup of Darts.

Having been out of sorts for much of the contest, including missing their first 13 darts at double, the veteran Singapore pair staged a grandstand finish when 51-year-old Harith Lim took out 108 to level the match and the legendary Paul Lim – 67 years young – sealed victory with a classy 116 finish.

Following the tragic death of Kyle Anderson, the world of darts has been paying tribute to the Australian who played alongside Simon Whitlock on four occasions reaching the semi-final in 2018. 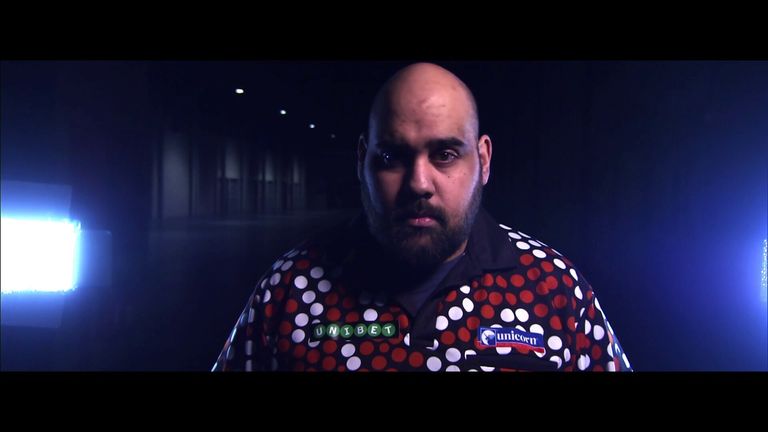 Anderson, who famously won the Auckland Darts Masters as a regional qualifier in 2017, passed away aged 33 last month and his countrymen delivered a fitting tribute with a 5-0 victory over Italy, wearing shirts bearing the name of Anderson.

“We always said we’d play the World Cup together….and this is the one we play together,” said Heta, who went to school with Anderson, as the crowd chanted Anderson’s name.

“We are not just playing for Australia – we are playing for Kyle as well,” added Whitlock. 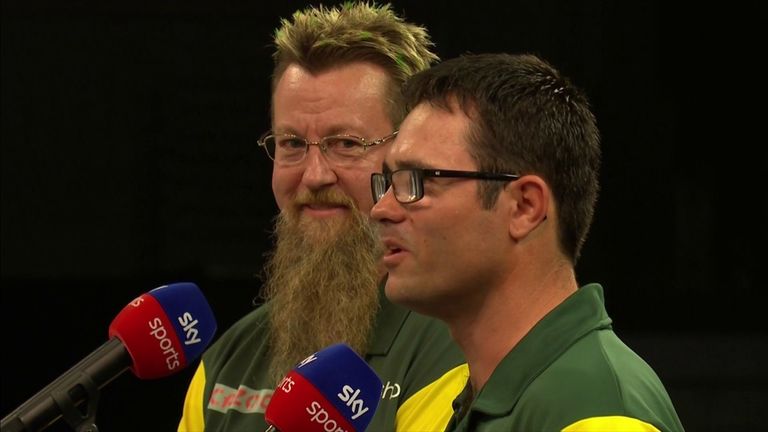 Simon Whitlock and Damon Heta say they aren’t just playing for Australia but for Kyle Anderson as well and will spur them on in the World Cup of Darts.

Simon Whitlock and Damon Heta say they aren’t just playing for Australia but for Kyle Anderson as well and will spur them on in the World Cup of Darts.

Scotland will face the dangerous Polish pairing of Krzysztof Ratajski and Krzysztof Kciuk after a routine victory over China for their new-look pairing of John Henderson and Peter Wright.

Snakebite teamed up with Gary Anderson to win the tournament for the first time in 2019, while Henderson made his debut alongside Robert Thornton last year after Anderson and Wright opted against travelling to Austria.

Now it’s World Matchplay champion Wright and Henderson and the sixth-seeded duo teamed up to whitewash the Chinese pair of Jianfeng Lu and Wenqing Liu. The pair split the winning doubles across the five legs to ease into a much tough-looking contest with Poland.

“We saw plenty of nerves in the first game but there were none from in match two – but it was a stand-out performance from Krzysztof Ratajski who played like a captain, and like a World Matchplay semi-finalist which is what he was just a few months ago.

“Credit to all four players, you feel for Sedlacek and Gawlas who exit after playing so well – but they’ll continue to learn, however Poland have shown that they are going to be a threat and with Scotland up next it looks like being a cracking contest,”

The Czech Republic have yet to win a game at the World Cup, but their rapidly emerging pair of Adam Gawlas and Karel Sedlacek were facing to go far – however, they came up against Poland, who delivered the display of opening night.

World No 11 Krzysztof Ratajski was the inspiration, taking out 122 in the final leg of a 5-2 win that saw the Pole average 105 to their opponents 103 – the Czech’s time is coming, just not this year and the Poles are a team to fear. 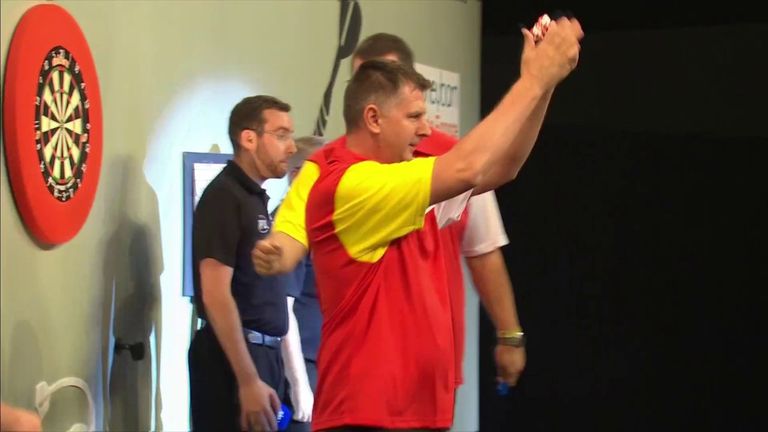 Krzysztof Ratajski hits a 122 checkout for Poland to knock out the Czech Republic in the World Cup of Darts.

Krzysztof Ratajski hits a 122 checkout for Poland to knock out the Czech Republic in the World Cup of Darts.

I’m sat next to the second ref position this weekend for the World Cup.

Second reffing is a pretty straightforward job most of the time… but less so in this event – where sometimes it resembles a bunch of toddlers clattering about on stage. pic.twitter.com/rbyBLwy7eW

The second day of action will feature the remaining eight first-round matches, including the top seeds England, who have a new look pairing with James Wade and Dave Chisnall teaming up for the first team.

England are the only team with two players from the world’s top 10 and they face the Brazilian duo of Diogo Portela & Artur Valle.

The other seeded teams in action are home favourites Germany, represented by Max Hopp and Gabriel Clemens although they face the most dangerous unseeded team in the shape of Canada who have classy operators Jeff Smith and Matt Campbell aiming to emulate their quarter-final of last year.

Wayne Mardle has tipped Northern Ireland to go a long way – the final in fact – and Brendan Dolan and Daryl Gurney start their bid against Hong Kong, while Belgium – seeded fourth and featuring Dimitri Van den Bergh and Kim Huybrechts began against late replacements Greece who have stepped in to replace Croatia.

Stay with us for more World Cup of Darts action, live coverage continues from Jena on Friday September 10 – join us from 6pm on Sky Sports Arena.