Birmingham continued their impressive climb up the Sky Bet Championship table as they beat Derby 2-0 on Friday night.

A defensive mix-up allowed Scott Hogan to give Lee Bowyer’s men the lead (31), with Jeremie Bela’s powerful finish enough to crush any hopes of a Derby fightback (81).

Midway through the second half, boyhood Blues fan Troy Deeney – who joined the club from Watford late last month – was brought on for his debut, much to the delight of the St Andrew’s faithful.

Victory lifts Birmingham up to fourth, two points behind leaders Fulham, ahead of the remainder of the weekend’s action, while Wayne Rooney’s Derby sit 16th.

The first half-an-hour, though competitive, passed largely without incident in the West Midlands, as the two teams shook off the malaise that follows the September international break and returned to action in front of a home crowd eagerly anticipating Deeney’s homecoming.

With the game’s first real opening, Birmingham took the lead – and it was a gift. Lee Buchanan turned and played the ball back into his own area under pressure and after Lukas Jutkiewicz saw an effort saved by Kelle Roos, he lifted the ball over to Hogan, who hooked in at the far post.

Just after the hour – albeit briefly – a subdued Derby attack sprung into life. Rams captain Tom Lawrence quickly shifted the ball from his right onto his favoured left and unleashed a rocket, which goalkeeper Matija Sarkic did well to beat away, before Louie Sibley lifted the rebound over the crossbar.

Deeney’s eventual entrance gave the whole stadium a lift, though shortly after his introduction, Sarkic was again called into action as the visitors began to control possession, expertly tipping away a dipping cross from Buchanan.

But before Rooney’s men could mount any sort of quest for an equaliser, Birmingham killed the game off. As a counter-attack took shape, a stroke of fortune saw Sibley’s attempted clearance drop kindly for Bela, who took a neat touch and rifled a second past Roos. 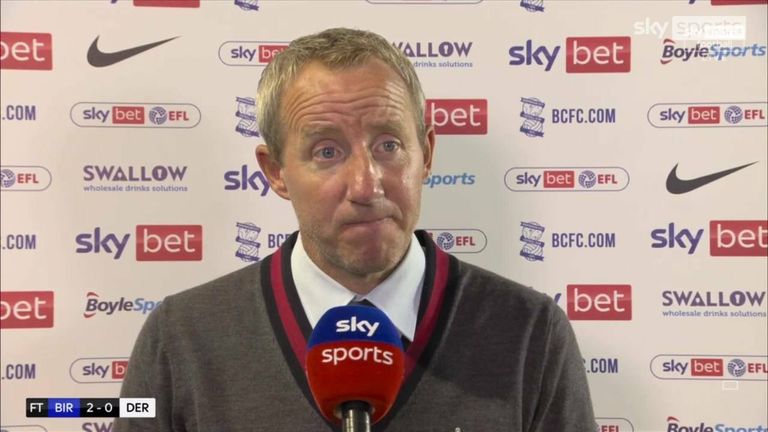 Lee Bowyer was full of praise for his side and in particular youngster Tahith Chong, who produced a man of the match display in Birmingham’s 2-0 win over Derby

Birmingham’s Lee Bowyer: “It was very satisfying to get our first three points at home in front of the fans. [We kept] a clean sheet, created chances, worked extremely hard as a group – it was very pleasing.

“We had to adjust the press slightly after the first few minutes and once we adjusted then we won it in some dangerous areas a lot of times in the first half and should have punished them more, I felt. I thought that we were very good.” 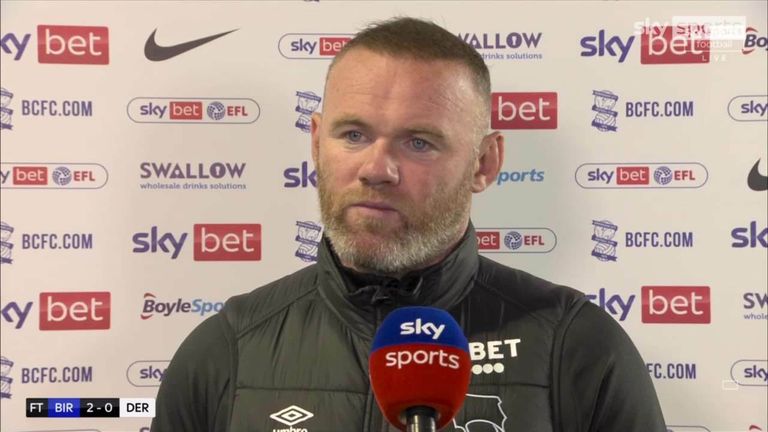 Derby’s Wayne Rooney: “It was frustrating, really. We played some OK stuff, but we didn’t really create that many clear-cut chances. On the other hand, I don’t think Birmingham did enough to win the game – we gave the ball away twice for their two goals. We weren’t at our best tonight and didn’t deserve to win.

“The way we are trying to play, there are going to be mistakes. I know that, I’ve told the players that, I take full responsibility for that. If I’m asking players to play out from the back and it doesn’t come off, that’s on me. It’s about recognising those moments when you can play, but also when you can play forward and play in behind.”

Man of the match – Tahith Chong

“It’s my first viewing of him live and I’ve been really impressed with what I have seen. He has been excellent and this experience is only going to help him improve going forward.”

Derby are next in action at 8pm on Tuesday, September 14, when they face West Brom at The Hawthorns, while Birmingham return at 7.45pm the following day, when they host Fulham at St Andrew’s. Both matches are live across Sky Sports.