The Sri Lankan rupee is coming crashing down. Finance Minister Basil Rajapaksa himself admitted this in parliament, in the debate on just a one percent fine on those who cheat the country in millions, both in rupees and foreign exchange. That is the reality of this Saubhagya Lanka.

A key move to curb the drop of the rupee is the Monetary Board’s new cash-margin-deposit against the import of non-essential, non-urgent goods. Is this the biggest move of the current Governor of the Central Bank, before he moves out, making way for a predecessor? Who knows?

This certainly puts up the prices of these so-called ‘non-essential’ goods. Have we forgotten those school children who climbed tough and tricky slopes, and also trees and distant roofs, to get messages to their mobile phones; as schools were closed down, and they tried to be informed by the teachers who did e-teaching.  It was the mobile phone that helped them to learn. But now the mobile phone is a ‘non-essential, non-urgent’ product! So, let’s save the rupee, and let the children who use the mobile phone to learn, go to hell, or keep roaming in ignorance through samsara.

The Central Bank and the Monetary Board are certainly involved in matters of great importance. Such as the payment of a pension to the former Governor, Ajith Nivaard Cabraal, and his predecessors and followers, too. 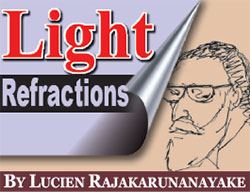 Were the Central Bank and Monetary Board at the time wholly unaware of the Los Angeles-based venture capitalist and political fundraiser, Imaad Shah Zuberi, 50, of Arcadia, California, who cheated the Sri Lanka government of millions of dollars by promising to rebuild the country’s image following the end of the war with the LTTE?

Investigations revealed that Zuberi received USD 6.5 mn in 2014 from the then Sri Lankan government after the conclusion of the war in May 2009, to thwart US moves against this country.

The Sri Lankan government through its embassy in Washington hired Zuberi in 2014 to boost the country’s image in the United States vis-a-vis various allegations.

The US Justice Department said: “Zuberi promised to make substantial expenditures on lobbying efforts, legal expenses, and media buys, which prompted Sri Lanka to agree to pay Zuberi a total of $8.5 million over the course of six months in 2014. Days after Sri Lanka made an initial payment of $3.5 million, Zuberi transferred $1.6 million into his personal brokerage accounts and used another $1.5 million to purchase from real estate groups.”

In total, Sri Lanka wired $6.5 million pursuant to the contract, and Zuberi used more than $5.65 million of that money to the benefit of himself and his wife. Zuberi paid less than $850,000 to lobbyists, public relations firms and law firms, and refused to pay certain subcontractors based on false claims that Sri Lanka had not provided sufficient funds to pay invoices.

In November 2019, Zuberi pleaded guilty to a three-count indictment charging him with violating the Foreign Agents Registration Act (FARA) by making false statements on a FARA filing, tax evasion, and making illegal campaign contributions. In June 2020, Zuberi pleaded guilty in a separate case to one count of obstruction of justice. He is now serving his prison sentence.

The US Justice system is not like in Sri Lanka, where the accused are so easily removed from charges by officials who worship the rulers.

The question here is whether the Central Bank was wholly unaware of this crooked role of Zuberi?

Let’s go back to another great loss that Sri Lanka suffered. When Ajith Nivaard Cabraal was the Governor of the CB.

Are we to forget the hedging agreement, where Sri Lanka had to pay USD 110 for a barrel of crude oil which could have been imported at a price of USD 70 – 80, as a result of which the country lost over USD 162 million.

Sri Lanka also suffered a loss of Rs 2,100 billion due to investing in Greek bonds in 2011. The investment took place at a time when the economy of Greece was collapsing. Not only did the country lose profits, but also lost the initial investment. It was people’s money.

Just keep in mind that none of this is corruption. It is the stuff of Saubhagya Governance as we see it today. Like the ever-so-clean sugar imports and crooked trading, and more recently the purchase of rice from so-called hidden go-downs.

The Central Bank of Sri Lanka is certainly moving in the direction of a renewed Cabraal leadership, with a long-delayed pension, a Cabinet ranking, and no doubt more pensions to follow. The Central Bank with its record of Zuberi, Greek bonds, etc., is certainly the stuff of Good Governance by the Rajavasala Rajapaksa Power Squad.

Let’s wish good luck to the current Governor of the CB as he moves to a foreign appointment, and give a truly loud cheer to Cabraal, in his renewed position in the Central Bank. The tears of Sri Lankans will certainly bring joy to those who make our money even weaker.