Both James Wade and Dave Chisnall conceded that they felt nervous playing for England but expect to improve in their next game.

Both James Wade and Dave Chisnall conceded that they felt nervous playing for England but expect to improve in their next game.

England’s bid to win a first World Cup of Darts without Phil Taylor recovered from a slow start to see off Brazil and complete a full-line-up of seeds through to the second round.

James Wade and Dave Chisnall are teaming up for the first time and are seeded first as the only team to have two players ranked in the world’s top 10, but they had to rally from 2-1 down against the unfancied Brazilian pairing.

Both Wade and Chisnall have featured previously but never with each other – Wade in particular has experience of a shock exit.

The Machine’s only appearance came in the first ever World Cup in 2010 alongside The Power where they lost in the first round to Spain, while Chizzy reached the semi-final with Adrian Lewis in 2017 and the quarter-final with Rob Cross in 2018.

At one stage it looked like Wade might be on the receiving end again after England missed six darts for a 2-0 lead and the Brazilians pinched the leg before claiming a 23-dart leg and a 2-1 lead.

However, England’s class eventually told and when Wade found double 10 a 5-2 win was secured and a date with Devon Petersen’s South Africa in the second round after his partner Carl Gabriel pinned the winning double to surprise Spain.

Petersen has been the one constant for his country, twice reaching the quarter final, but it’s been first and second round exits for the last six years. However in Gabriel, he had a man rising to the occasion, a brilliant bullseye finish served early notice of his intent and as little separated the teams it came down to a decider.

With Spain missing a dart at double top for the match, Gabriel stepped up to pin the same target with his last dart in hand.

The second-round action takes place on Saturday across a bumper double session of action, with two singles matches to be played and if the tie is all square a deciding pairs match will take place.

Check out the best action from Day Two of the World Cup of Darts.

Check out the best action from Day Two of the World Cup of Darts.

Brendan Dolan and Daryl Gurney are playing together for the sixth successive year and despite their pedigree, have suffered first-round exits in three of the last four years and they avoided another by the skin of their teeth against Hong Kong.

Seeded fifth, Dolan and Gurney were up against it early as the teams traded the first six legs before drama ensured. Averaging almost 90 throughout, Hong Kong seized their chance with the first break of throw for a 4-3 lead. 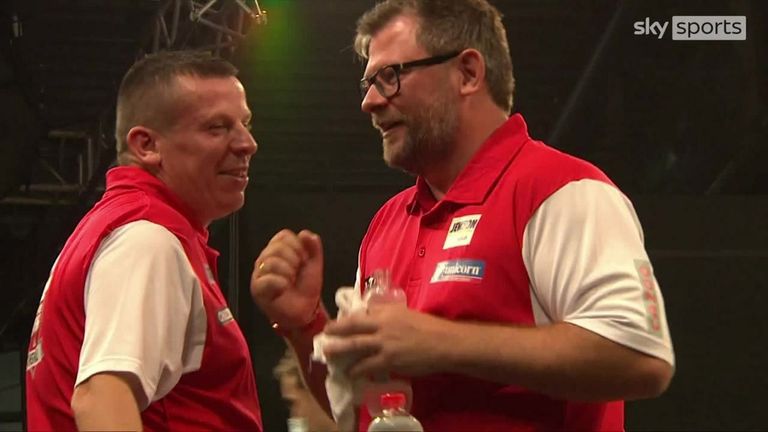 Northern Ireland just about edged past Hong Kong in the World Cup of Darts.

Northern Ireland just about edged past Hong Kong in the World Cup of Darts.

However, they wilted with the finish line in sight, Kai Fan Leung first made a mess of 84, but when given two more visits both and his partner blew further opportunities failing to punish the Northern Ireland pair.

Having levelled at 4-4, Northern Ireland kept their cool in the decider to advance to a showdown with Portugal, rather than a meeting with the Republic of Ireland.

Grand Slam champion and world No 8 Jose De Sousa inspired a comeback victory over William O’Connor and Steve Lennon. The Republic of Ireland are only two years removed from a run to the final as an unseeded team, and their clash with the Portuguese was a heavyweight first-round encounter that saw them seize control early.

But De Sousa chipped away finding the winning doubles, as his partner Jose Marques more than played in his part on their way to an impressive 5-4 victory which turned when the Irish – who led 3-1 – missed four darts for a 4-3 lead. 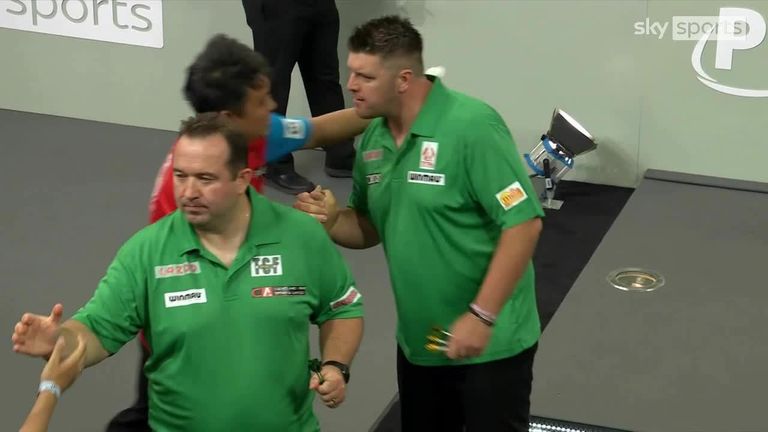 Max Hopp conceded how nervous he was playing in front of his home crowd in Germany after narrowly defeating Canada.

Max Hopp conceded how nervous he was playing in front of his home crowd in Germany after narrowly defeating Canada.

Hosts and eighth seeds Germany came through a classic against Canada, with both teams tipped to cause problems for the rest in the top half of the draw it was the hosts who emerged triumphant in front a lively and partisan crowd.

After some early missed darts at double, the opening four legs were all against the throw. Jeff Smith’s 107 looked to have given Canada the initiative, only for Gabriel Clemens to go even better with a superb 118. 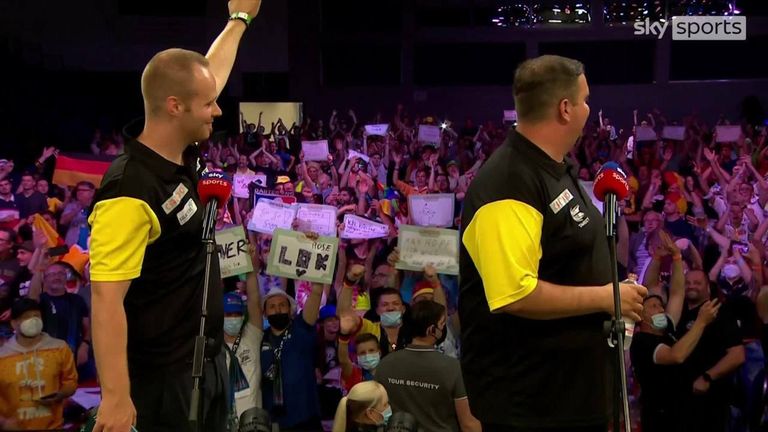 Canada and Germany managed to break each other with back-to-back 100+ finishes.

Canada and Germany managed to break each other with back-to-back 100+ finishes.

A rousing Sparkassen Arena, already bubbling with anticipation in Jena, erupted when Hopp pinned double 16 for the lead for the first time, and they kept their nose in front to take full advantage when Canada missed two darts to force another last-leg decider.

Hopp took out double top to send the home fans dancing between the tables, and a winnable second-round contest against new-look Japan awaits after debutants Matsuda Jun & Yoshihisa Baba were brilliant 5-1 winners over Russia.

Can Belgium go all the way?

For five of the last six years, Belgium have reached the last four at the World Cup of Darts, while only once in 11 renewals have they failed to make at least the quarter-finals.

For the fourth year in succession Kim Huybrechts and Dimitri Van den Bergh are teaming up and the fourth seeds are a major threat not only due to their ability but the way they have gelled as a team – and that was in evidence as they saw off late replacement Greece who stepped in for Croatia on the eve of the tournament with the minimum of fuss. 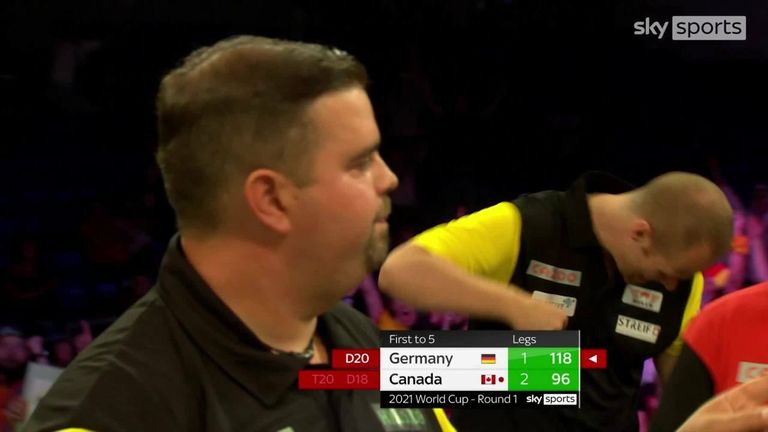 Both Philippines and Austria hit 100+ finishes in the opening legs of their match in the World Cup of Darts.

Both Philippines and Austria hit 100+ finishes in the opening legs of their match in the World Cup of Darts.

They’ll face two-time quarter-finalists Austria who were too good for the Philippines, reeling off five straight legs to claim their place in the second round and maintain their own ambition of going further than their best showing of the quarter-finals.

Mensur Suljovic and Rowby-John Rodriguez have dropped out of the seeded positions as Suljovic has slid down the rankings, but they served notice of their threat with a blistering burst.

After a slow start, Lourence Ilagan took out 112 to start the contest, but Austria responded with a three-figure finish of their own and then added four more legs with the minimum of fuss.

Eight second-round matches take place across two sessions on Saturday, when the format flips to favour the seeded teams – all eight of whom have made it through to the last 16.

Each team nominate their order of singles play and should any team win both they will advance – if the singles matches are split then the drama begins again as a deciding pairs match will determine who makes it through to the quarter-final.

Saturday’s Second Round Order of Play

2019 champions Scotland are perhaps in for the toughest test when they take on the dangerous Poland pairing of Krzysztof Ratajski & Krzysztof Kciuk who produced the performance of the first round in their win over the Czech Republic.

Like England, the Netherlands are chasing a first title without a legendary figure. The Dutch haven’t won since Raymond van Barneveld dropped off the team, they face a Singapore team that features 67-year-old Paul Lim who is still showing his class.

Australia are riding a tidal wave of emotion and they are up against a talented American team for who Danny Lauby Jnr has impressed while the defending champions Wales meet Lithuania as they look to become the third pairing to retain the title.

Stay with us for more World Cup of Darts action, live coverage continues with a bumper double session from Jena on Saturday September 11 – join us from 1pm and 7pm on Sky Sports Mix for all eight second round matches